During this week’s Space Café, SpaceWatch.Global Publisher Torsten Kriening got the chance to speak with Professor Gérardine Goh Escolar, a diplomat lawyer, First Secretary of the Hague Conference on Private International Law and Adjunct Professor at the National University of Singapore.

With a stellar legal career spanning two decades across Singapore, The Netherlands and Germany, Gérardine has held legal and advisory positions at organisations including the German Aerospace Center, the United Nations’ International Court of Justice and the Iran-United States Claims Tribunal. She has also completed undergraduate and postgraduate degrees at the International Space University, National University of Singapore, University College London, Leiden University and the University of Cambridge.

Described as someone we should “listen to very carefully”, Gérardine specializes in the intersection of technology policy and law, building effective solutions to the challenges our communities face, by leveraging new technologies and the legal and policy resources available at the international and transnational level.

This week, she and Torsten discuss distributed ledger technology and how it might transform the way countries and organisations work together in space.

Since 2008, distributed ledger technology (DLT) – and its subsets like Blockchain – have dominated tech headlines. In simple terms, it is a form of decentralised record-keeping that is said to improve accuracy, promote transparency and counteract manipulation.

This style of the database has been widely adopted across all sectors – from finance and banking through to tech and legal.

The key benefit of DLR, according to Gérardine, is that it is immutable.

“Once the information goes up onto the database and it’s stored, it cannot be deleted. Any updates to that data are permanently recorded. And this is actually a big change in terms of data recording, in terms of how information is gathered and communicated.”

“This technology can be used to record data. So it could become a registry. It also could record data that moves. So dynamic data, such as when you have, for example, a transaction.”

“Now, the DLT then refers to the technological infrastructure, the framework that allows this to happen simultaneously. That means that you can have access, you can validate, you can update your records – and that’s what characterizes this specific technology.”

Is DLT the next frontier for space?

While space’s roots are in military dominance and government institutions, the essence of distributed ledger technology – according to Gérardine – is the democratisation of access.

However, these worlds may soon collide, because in many ways, there are similarities between the technology and space sectors.

“They have one thing in common, and that is they break down the artificial borders that we draw in policy, legal and geographic terms – which is the borders between countries. By its very nature, space activities, as well as activities on the ledger, are basically transfrontier.”

“You have two different worlds that started with, in that sense, almost opposite origins, and they’re coming together.”

Distributed ledger technology could enormously benefit the space sector in the management of transnational projects, space policy, capital raising and for negotiating space as a shared resource.

For example, it could be used in areas such as supply chains – to track resources in an asteroid or celestial body mining or to manage large space construction projects.

“It might be interesting as well, to have a decentralised database of all the debris in orbit, which is on the ledger, it allows for a neutral, very neutral place, for getting positions of satellites, and so on.”

But is DLT fit for every purpose? According to Gérardine, we shouldn’t assume a new technology can be used to solve every purpose, but organisations deciding on whether to use DLT technology, should consider these three specific, legal scenarios:

To listen to Gérardine Goh Escolar’s insights into distributed ledger technology and space, you can watch the full program here: 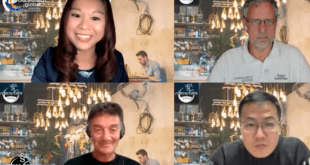 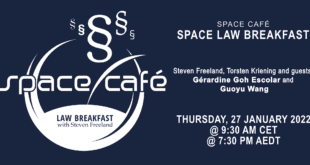 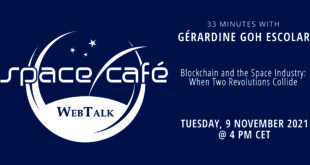