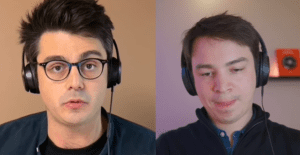 As part of the partnership between SpaceWatch.Global and Orbital Gateway Consulting we have been granted permission to publish selected articles and texts. We are pleased to present “Dongfang Hour China Aerospace News Roundup 1 – 7 November 2021”.

Hello and welcome to another episode of the Dongfang Hour China Aero/Space News Roundup! A special shout-out to our friends at GoTaikonauts!, and at SpaceWatch.Global, both excellent sources of space industry news. In particular, we suggest checking out GoTaikonauts! long-form China reporting, as well as the Space Cafe series from SpaceWatch.Global. Without further ado, the news update from the week of 1 – 7 November 2021.

Just a week ago on October 31st, Chinese smallsat manufacturer Spacety, based in Changsha city in central China, signed a cooperation agreement with the Beijing University of Posts and Telecommunications for a constellation called Tiansuan (天算), literally “celestial calculations”.

For a start, it will be composed of 6 satellites, with the first satellite, “BUPT-1”, planned for launch in May 2022, and the completion of the constellation for 2023. 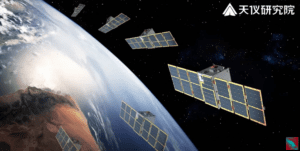 The objective of this constellation is not very clear. It seems like this will be a technology verification constellation, described as “carrying out preliminary research on intelligent digital infrastructure, providing technical support for the development of China’s 6G network, satellite Internet and other technologies.”

The exploratory nature of this constellation makes the involvement of BUPT unsurprising, as the university is part of China’s top-tier academic players in telecoms and electronics. The open-source nature of the project, according to the press release, also suggests that the project will be open to other research institutions or space companies; and indeed were present at the ceremony a number of future participating members, including:

Even if the constellation is a modest one (6 satellites), it puts in the spotlight the rather good situation commercial smallsat manufacturer Spacety is in. A couple weeks ago at the Zhuhai Airshow, Spacety signed a cooperation agreement with the Institute 38 of CETC to launch and operate together a constellation of 96 SAR satellites called Tianxian (天仙). And this comes 10 months after Spacety launched its first SAR satellite called Haisi-1 in December 2020, and this suggests that the results of the first satellite were sufficiently satisfactory for CETC to decide to expand to 96 satellites.

So overall a nice result for Spacety. One last thing I’d like to note: both partners/customers of the aforementioned constellations are from state-owned academies or research institutes, and this is noteworthy in the sense that they could have gone to state-owned smallsat manufacturers like Shenzhen Dongfanghong or Shanghai Microsate. The fact that they went for a private space company in Changsha instead shows that Spacety could be bringing a unique value proposition to the table, and does show some SoE support (willingly or not) of the commercial space sector.

A couple of additional points: interesting that a Global Times article reported that the contract was actually between Spacety and a BUPT research institute in Shenzhen, which makes it even more noteworthy that Shenzhen Dongfanghong was not chosen. The Global Times article also noted that construction of the constellation would be based in Shenzhen, and that there may be some Greater Bay Area component to the constellation.

To Jean’s earlier point about the purpose of the constellation, the Global Times article also quoted Fu as calling the constellation a “scientific research platform”. I think that the selection of Spacety is, if anything, a validation of the latter’s positioning as a “Space-as-a-Service” company.

That is to say, Spacety has built a pretty good business on providing reasonably-priced, rapid-response access to space via their satellite platforms. We have seen a variety of Chinese companies, and even a few European ones, contract with Spacety to launch some component (thrusters, antennas, etc.) on a Spacety satellite for in-orbit testing and verification. Essentially, Spacety is offering access to space as a service, with their primary target market being companies looking to test and verify technology. It sounds like the Tiansuan constellation is conceptually similar, but for scientific research & development, with a particular focus on technologies related to 5G/6G communication. That being the case, it’s perhaps no wonder that Spacety was chosen for this contract, given their experience in building modular satellites optimized for tech verification.

Finally, I would point out that this agreement involves a wide variety of very powerful actors. This includes, among others, the Guangdong Province Next Generation Communications & Networks Institute (广东省新一代通信与网络创新研究院, a provincial government institute), a national-level university’s Shenzhen branch, one of China’s largest tech firms (Huawei), the Technology Research Lab of China Mobile, and Spacety.

Which is to say, this appears to be a project with some massive players, for whom it is a pretty small project, but for Spacety, this is their core business. An example of the necessity (or at least desirability) for Chinese commercial space companies to cooperate with bigger players like provincial governments or SOEs. I would finally point out that potentially, there is some connection here to the Guangdong Government Digital Economy Development Plan published in August.

New Chinese launch startup oSpace appointed Yao Song as Co-CEO. oSpace burst onto the scene with an RMB 400M (US$65M) initial funding round earlier this year, though they still have a lot of competition, as China’s ~20th launch company. The new Co-CEO was formerly founder of Shenjian Technology, a company that developed semiconductors for autonomous driving, smart security, cloud computing, and AI. Shenjian was acquired by Xilinx in 2018. In the press release, the company notes that its Gravity-1 (Yinli-1) rocket has entered the preliminary production test stage.

Long and insightful interview here with Yao Song about his journey from one of China’s top unis (Tsinghua) to founding Shenjian Technology to becoming financially independent and wanting to go build rockets. His background is pretty incredible, having graduated from Tsinghua in 2011, going to Stanford, founded Shenjian Technology in 2016, and it was acquired for US$300M in 2018. Now 29 and financially independent, it’s interesting that Yao Song would go and join one of China’s newest commercial launch firms, having been founded only last year. WIth ~70 employees now, oSpace is apparently growing quickly, with presumed support from the government of Shandong. 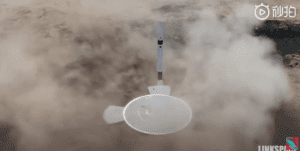 An unexpected commercial space company resurfaced this week, after 2+ years of stealth: Linkspace, the first commercial launch company to be founded in China (Jan. 2014), and founded also by arguably one of the youngest (ex-)CEOs of the industry, Hu Zhenyu, at just 21 years old in 2014.

This week, Linkspace announced the successful completion of a first batch of tests of its first pump-fed engine, the Fengbao-1 (风暴一号), literally “Storm-1”. The tests were said to investigate “pump system efficiency, variable working condition capabilities, and engine throttling”.

Linkspace is known to be the first Chinese company to have successfully completed a number of successful VTVL hops, with 5 successive prototypes all called RLV Tx (x=1-5), RLV standing for reusable launch vehicle. The company was noteworthy for developing this type of technology from day 1, while other launch companies such as Landspace, iSpace and Galactic Energy have preferred to first develop a small-lift solid-fueled rocket to get their hands dirty with a more simple design.

This news is also noteworthy because it’s the first sign of Linkspace developing more sophisticated engines. 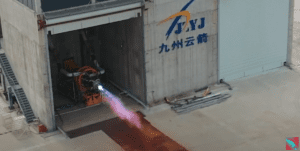 Liquid-fueled engines are generally either pump-fed or pressure-fed. Pressure-fed engines, the most simple configuration, is where you have the propellants under high pressure in tanks and the opening of a valve is sufficient to inject them into the combustion chamber. The disadvantage of this simple layout is that they are generally not adapted to first stage engines where you are looking for higher thrust and burn much more propellant. Linkspace’s previous engine, used on the RLV-T5 prototype, was a simple pressure-fed engine, consuming ethanol and liquid oxygen.

As mentioned, Linkspace’s new engine, the Fengbao-1, is a pump-fed engine, meaning that there is either a turbopump or an electric pump pumping the propellants from the tanks into the combustion chamber. This enables higher thrust, at the expense of complexity. But this will enable Linkspace to go beyond the several hundred meter hops it had performed previously, and build a suborbital and orbital rocket prototype.

Last interesting point about this test: It’s actually a surprising turn of events to see Linkspace develop their own engines. In the summer of 2019, after their successful 300m hop with their RLV-T5, they signed a collaboration with Jiuzhou Yunjian, an engine manufacturer that we mentioned in last week’s episode, to use their Lingyun 10t thrust methalox engine. The latest news about the Fengbao-1 may suggest that the collaboration did not go forward as planned.

And on the topic of Jiuzhou Yunjian, the company performed a variable thrust and gimballing hot fire test, and which resulted in some cool footage being published on their social media. But for the sake of keeping the episode contained, you’ll have to go to our newsletter to read more about the test 🙂 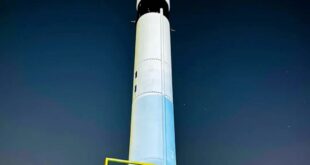