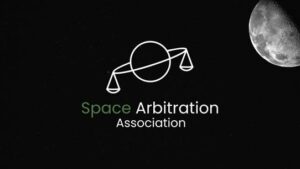 Today is the launch of the Space Arbitration Association, an association that will focus on providing information and organizing events around the topics of space and international arbitration.

The last few years have seen a dramatic increase in space activities, which are expanding not only into new fields such as space tourism but also increasingly involve commercial actors. It is to be expected that this increase in actors involved in space activities and the corresponding congestion of at least the lower orbits, will over time lead to an uptake of space-related disputes. Given the international, highly technical, and often confidential nature of space activities, international arbitration is a uniquely well-suited dispute resolution mechanism for the space community.

Despite this natural fit between space and arbitration, there have not yet been many discussions in public fora that focus on the intersection between these two fields. I have worked in international arbitration for many years and regularly attend and speak at conferences on international arbitration topics. When I became interested in space activities, through an arbitration I was working on, I noticed that there are as many conferences and discussions on space law but that, although there are and will be space disputes, there has so far been little overlap between the space and arbitration communities – at least in terms of public discussions.

This is why I founded the Space Arbitration Association to change this, and offer the possibility of an exchange that can educate space professionals about international arbitration and arbitration lawyers about space.

In view of this, please join us on 13 January at 9 am CET for our first event on the topic “Does Outer Space Need Arbitration?” hosted by Spacewatch Global.

Laura Yvonne Zielinski is an Attorney in Holland & Knight’s International Arbitration Practice Group based in Mexico City. She specializes in public international law and international commercial and investment treaty arbitration. A native of Germany, Laura studied in France, and the US. She obtained her first law degree from Sciences Po Paris and holds an LL.M from Columbia Law School. Recently, she obtained a certificate in Strategic Space Law from McGill University. She is admitted to practice law in New York and Paris, and is fluent in German, French, English and Spanish. Prior to joining Holland & Knight, she practiced international arbitration at Eversheds in Paris.