#SpaceWatchGL Opinion: Space Applications for Military: Eyes Beyond the Sky

For decades, space has been one of the critical assets for military operations. In fact, space technology is a product of defense industry that needed an upgrade in technological capabilities for various military operations since the early 1940s. The transition of Geospatial Intelligence (GEOINT) application from aerial photography to satellite imagery proves that space applications form the core part of both defense and intelligence operations. Therefore, since late 1990s privatization policies for developing space technology for defense have been initiated by countries like the USA. But from the past few years, the entry of commercial players in the defense segment has doubled the amount of government investment in military space applications. India, China, France, etc. are some of the countries that have recently planned or announced to upgrade their space capabilities for defense forces. Various reasons are playing a crucial role in diversifying space technology for the defense sector. Following are some of the factors that are changing the landscape of military space technology:

The 21st century has given rise to a New Space race and space applications for the military is one of the important focus of this race. The advancement of space technology, low-cost services, etc. are some of the crucial factors that have urged many developing nations to equip their defense forces with space applications. Though dropping prices of satellite services is one of the reasons for increasing the demand for military space applications, the fast-track need for upgrading the defense technology is the most important factors for many developing nations. Especially considering the military intelligence operations, GEOINT plays a central role in the intelligence nexus. And as companies like Planet Labs, Digital Globe have paved the way for innovative and low-cost satellite imagery services, the road to space applications for military might encourage numerous public-private partnerships in the near future.

Though the defense industry’s commercial outlook has made space a peaceful resource; many developing countries are still struggling to provide appropriate opportunities for the private sector in the defense segment. So, what is the end solution to accelerate the research and development process for military space applications? Encourage more private engagements by targeting technology niche is one of way to expedite this process. For example, in 2015, China became one of the countries to open military doors for private players to engage in military space developments. Similarly, the USA displays an excellent example of how encouraging public-private partnerships can lead to the overall socio-economic growth of the country. Therefore, privatization is one of the ways to bring-in innovation and harness the right talent for the nation.

Numerous things are rapidly changing the technological landscape of the military space applications, but the recent success of Chinese Quantum Communication satellite lies at the forefront of the defense industry. With this success, China will be able to change the face of Signal Intelligence (SIGINT). In SIGINT, there is a high probability of third-party penetration by using various hacking techniques. And Considering the cyber-attacks, the satellite industry is progressing to counter the cyber threats via strengthening the end-to-end encryption techniques. But this scenario is about to change with the inception of Quantum Communication satellites. China is not the only country looking beyond skies to deploy Quantum Communication network; India, South Korea, Singapore, and Japan are also the upcoming players who are looking forward or have already made some amounts of investments in Quantum Communication network via satellite.

Every technology upgrade brings more comfort to society, but its very strength also invites challenge. This is one of the reasons why space is a point of attraction for many nations around the world. But, tracking the global footprints of the space applications for the defense industry, both developing and developed nations have started looking towards space as a valuable asset for national security as well as to ensure the economic growth of the country.

Omkar Nikam is an independent space and satellite consultant based in Strasbourg, France. As one of the leading satellite experts in the European market, Omkar specializes in providing market research, analysis, and consulting services for several upstream and downstream space/satellite companies. Omkar also manages an online research and analysis portal, Access Hub, providing a critical analysis on the current developments in the space and defence industry.

In his decade long career path, Omkar has spearheaded extensive consulting and market research projects for European and American companies. As an independent professional, he consistently manages upstream satellite communications market studies report for private enterprises with an emphasis on European, Latin American, African, and Asian satellite market. Simultaneously, with a strong foothold in technology and business journalism, Omkar also provides an extensive editorial and communication services for the space and satellite companies. He can be reached at: www.oknikam.eu 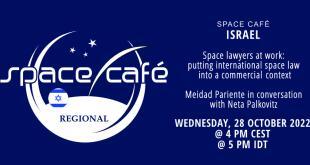