#SpaceWatchGL Column: Satellites for Nations: The Dawn of a New Era – The Key to New Markets?

As part of the partnership between SpaceWatch.Global and Blaine Curcio, we have been granted permission to publish selected articles and briefs. This is ‘Satellites for Nations: The Dawn of a New Era – The Key to New Markets?’, originally published at WestEastSpace.com on 24 November 2019.

For national governments, the motivations can be more varied. While many countries launch satellites with the intention of connecting rural populations, improving critical services, or making money, some nations have procured satellites to establish themselves as players in the space race indulging while experiencing deserved pride coming from this feat. Satellites for nations so far have come in any number of shapes and sizes, but are broadly similar in that they involve satellites that are underutilized, and as a consequence, do not necessarily create the return on investment, or the social benefits, that would have been built into the planning. In short, while a country may feel national pride in seeing a rocket with its flag launch into space, the pride has been short-lived, as many a legacy satellite have ended up costing the country more money than it delivers in benefit.

A Technological Leap in Satellite Communications

Since the early 2000s, the satellite communications industry has been undergoing a gradual change towards high throughput satellites (HTS), with this gradual change having accelerated dramatically over the past 5 years. Today, the majority of new satellites being procured would have, at a minimum, a partial HTS payload, and in many instances, the satellite is wholly HTS.

The concept of HTS is fairly simple—communications satellites are able to re-use the same spectrum multiple times, allowing for a dramatic increase in throughput achieved on a given satellite. Indeed, 15 years ago, a “large” satellite may have been 2 or 3 Gbps of total throughput. Today’s largest HTS are many hundreds of Gbps of throughput, and operators are already talking about satellites with 1 Tbps (Terabit per second, or 1,000 Gbps) of throughput. This becomes especially important because, while throughput has increased by a factor of 10x, 20x, or even 100x, the total cost for these satellites has not increased nearly as dramatically. This means that all else equal, a satellite operator can get much more bang for their buck today compared to 10-15 years ago, with the CAPEX per Gbps falling from >$100 million to as low as a few million dollars. Simply put, over the past 10-15 years, most satellite manufacturers have elected to dramatically increase the throughput of satellites, while keeping the cost fairly constant, leading to cheaper $ per Gbps.

With that being said, some satellite manufacturers—primarily in the United States—have taken a different route. Miniaturization of components, better spectral efficiency, and frequency reuse have allowed some companies to develop micro to small GEO satellites that have sufficient throughput ( 5-10x higher than that of a traditional satellite) to cover an entire small to medium sized nation’s needs, but on a much, much smaller—and consequently cheaper—GEO satellite. In short, rather than transitioning from a 2 Gbps satellite to a 60 Gbps satellite, while keeping the price several hundred million dollars, small GEO manufacturers have tried to transition from a 2 Gbps satellite to a 10-15 Gbps satellite, while reducing cost from multiple hundred million dollars to some tens of millions dollars. This different take on satellite manufacturing is surely logical in many instances—there is no hard and fast rule that requires satellites to be the size of a sports utility vehicle, and so why not reduce it to the size of a large dishwasher, especially if the throughput can still pack a punch? While this seems to sacrifice some economies of scale, in many instances, the small GEO can be quite competitive thanks to higher fill rates and shorter lead times leading to a higher internal rate of return. 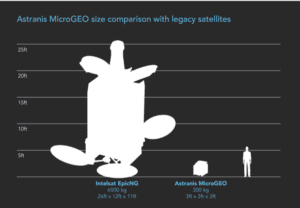 With markedly better bandwidth economics than traditional satellites, and with significantly lower upfront costs than large HTS satellites, the small GEO can be highly competitive in certain scenarios. In particular, countries that are considering GEO satellites for rural connectivity, but do not want to put forth several hundred millions of dollars to buy many dozens of Gbps of capacity, can benefit from a smaller, cheaper, more flexible satellite.

Several companies that are manufacturing small GEOs are designing satellites with the intention to address small countries that want to procure their own satellite. To date, the most concrete example is that of Astranis Space Technologies having found a major customer in Alaska, a nation-sized state, that is buying significant capacity today from other satellite operators, but that cannot justify the cost of their own large GEO. As a result, the affordable Astranis solution has been a game-changer in these specific markets. National Satellites could therefore start providing more than just pride, but also an economically viable solution for improving the connectivity of their population, and subsequently, developing the broader economy.

While small GEOs are clearly appropriate for specific markets such geographically small to medium-sized nations, they might not be able to cover larger ones such as the United States or Russia if connectivity is needed across the entire country from day one. However, it also is possible to launch multiple small GEOs in phases to build out such markets in a risk-averse manner. There are many small to medium-sized nations out there with space ambitions while there are only a few such manufacturers of small GEO satellites and hence, the demand might be higher than the supply which would force some nations to either stand in line or opt for one of the traditional options.

The satellite communications industry continues to undergo a revolution, with capacity pricing declining, satellite throughput increasing significantly, and a variety of new technologies entering the industry. To now, the biggest beneficiaries of this have likely been purchasers of satellite capacity, with incumbent satellite operators, perhaps counter-intuitively, not benefiting very much due to the negative impact on capacity pricing, and the entrance of new satellite operators that do not have legacy capacity that must sell at legacy prices.

Moving forward, and in particular with the small GEO platform, there will likely be another beneficiary—small countries that want to use satellites to connect their unconnected. In these cases, rather than spending several hundred million dollars for many tens of Gbps, countries have another option, namely spending ~60-80% less money, for 10-15 Gbps of capacity. While not suitable for all countries, the small GEO value proposition can clearly make sense for countries with limited financial resources, limited demand for satellite connectivity, or even general uncertainty about how well-received satellite capacity will be. In any of these cases, a small GEO may be sufficient for the country’s satcom demand, or may be a lower-risk steppingstone towards a larger GEO at a later date. Overall, the satellite communications industry will continue to evolve across a variety of technological fronts. While the final impact of this rapid change is not immediately clear, there is one likely outcome in the near-term—the birth of a new satellite for nations.

Rights reserved – this publication is reproduced with permission from Blaine Curcio, original is https://westeastspace.com/2019/11/24/satellites-for-nations-the-dawn-of-a-new-era/.