During the Space Generation Advisory Council Event in Kuwait, SpaceWatch.Global Editor Chaitanya Gopal had the chance to sit down with Dr. Bassam Alfeeli, the Founder of Orbital Space,  the first private company in the Middle East to provide access to space through CubeSat technology. Here, he talks about his ambitions for the company and his goal of building a space programme in Kuwait.

Dr. Bassam, it’s a pleasure to have you. First of all, let’s start with an introduction about yourself.

Well, thank you, Chaitanya, for giving me the opportunity for this interview.

I come from a science background. Since I was a kid, always been fascinated by space and it became my lifetime mission to be involved in space and hopefully be one of the founders of a space programme in Kuwait. I have dedicated my life to make this a reality and I have been working for almost now 10 years, since I completed my PhD, to somehow convince government officials to give us a chance to start a space programme. I have submitted several proposals, including to KFAS (Kuwait Foundation for Advancement of Sciences) and even to higher officials, the government and different entities, including KISR (Kuwait Institute for Scientific Research), and even to His Highness the Emir. I literally went all the way to the top to try to get some attention. Unfortunately, this didn’t happen so I decided to take a risk and start something by myself. I set up Orbital Space.

Orbital Space is a business but the initial intent is not to generate money and be profitable, but to be a platform for the people in Kuwait to create a community and build a critical mass to push for a space programme, quickly. The idea of Orbital Space is to build capacity as we go. Orbital Space does not have the required expertise to carry our a full range of space activities yet. However, the idea is to build a team from the ground up. And once we have the right team, then we can build our capabilities as we go.

The first step will be to build our own ground stations and that’s what we’re working on right now. We must be able to communicate with existing CubeSats on orbit. From there, we will start working on our own CubeSat project. Kuwait University have their own CubeSat project, and we wish them all the best. Our target would be the other private universities in Kuwait. I believe that they would be interested in participating in a pilot programme but they don’t know how to approach it. Another potential client pool would be the large corporations in Kuwait, through their CSR (Corporate Social Responsibility) programmes. They might be interested in establishing a project for young people in Kuwait, as part of their CSR initiative, and Orbital Space can take the lead on that. Those are our current plans. Since we launched, back in August 2018, we’ve been receiving interest from local people and from the wider Gulf region. We have had people submitting their CVs, to join the team as volunteers. We can’t afford to hire people yet, but we’re at the stage of building the right team for space in Kuwait.

As I understand, this a step by step process to build a space sector in Kuwait. Why do you think space is important or should be important in Kuwait? And seeing the other countries in the region, why hasn’t Kuwait had an organic push towards space too? 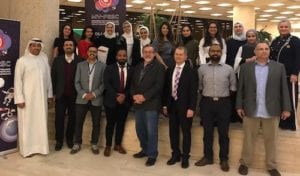 The history of Kuwait, the wars, brought a lot of challenges to the Kuwaiti people. We also have a parliamentary system which sometimes cripples development. The priorities right now in Kuwait are based on the development of required infrastructure, to sustain the country. We have issues with roads, we have issues with electricity. For the government, setting up a space programme is not at the top of their priority list at this moment. However, I think it’s very important. Space has been used in many countries and many societies as an inspiration for development. Space inspires the youth, especially, to drive them to pursue STEM careers or STEM education, and that will help contribute to the development of the country. It also it gives a sense of national pride, which is really needed in Kuwait right now. Our neighbouring countries are developing at a much faster rate than Kuwait. I believe that Kuwait is at point where we need to reinstate national pride again. So, I think it’s very important that we pursue this route and that we should not be delayed.

It is unfortunate that government officials don’t see it as a higher priority at this point. But I think otherwise, and this is why I decided to start Orbital Space, and to be the seed for the space program in Kuwait. In most nations, the space programme starts from the government level and then it grows into a sustainable programme, and drives the private sector to be part of it. An example of this is the UAE. It’s a space programme that was put on steroids. It was a great example of how a government, if it has the will, can make very fast advancements and create success in such initiatives. However, we also want to prove that other ways are also possible. So, I’m attempting to prove that things can also start from private sector in an organic way. I don’t expect it to develop at the same rate as the UAE approach. I think we will move slowly, but steadily and I think that, once we reach a critical mass, we will create that chain reaction that will help us grow faster. Once we create some success, then government will probably give us more attention. Then things will speed up.

You mentioned that space inspires the youth and innovation. How do you go about spreading the word? Is it through events? Is it through talks? What is on your agenda, in the next weeks?

Right now, we’re focusing on social media. Orbital Space is on almost all social media channels. We try to promote what’s happening within the space domain. We’re also planning to work on our own events as well as participate in regional events. We participated in the latest Global Space Congress. We exhibited there, to make people aware of our existence, and it was very well received. We got a lot of visitors, especially from the UAE. We were lucky to have His Excellency Sheikh Mohammed Bin Rashid stopping by as well and we grabbed his attention. That was very exciting for us. He was also very encouraging. Even the UAE Space Agency and Mohammed Bin Rashid Space Center (MBRSC) were very supportive of what we’re doing. They said: “Anything you need, please just let us know. And we will be by your side”. We really appreciated this.

The naming of the ground station is very interesting. Back in the late 60s, specifically ’69, Kuwait set up the first ground station in the region. Part of the reason for this was to receive signals from the Apollo programme so that they could transmit the images from the moon landings to the region. It was done through this ground station, which is called Um Al-Aish. It was an iconic landmark in Kuwait until 1990 as it was the main station that received all the satellite signals for Kuwait. A lot of people associate this name with space. As I was growing up, Um Al-Aish was an important place and I visited the station one time when I was a kid. It inspired me to pursue space. I therefore decided to call the new CubeSat ground station for Orbital Space “Um Al-Aish 4”, continuing the legacy of Um Al-Aish 1, 2 and 3. We have received some signals from Nayif-1 and FUNcube which is a UK-based CubeSat, and also JY1-SAT which is a Jordanian CubeSat. We’d like to expand this ground station and even join a network of other ground stations so that we can be connected and share data with others or even give access to other CubeSat owners to this to this ground station if they want to send or receive signals. These are the things that we’re trying to inspire people by – through storytelling and building a connection. People born in the 90s probably don’t know much about space in Kuwait since Um Al-Aish was destroyed and never rebuilt. But we were hoping that maybe their parents and all our efforts, will bridge that connection. These are some of the things that we’re trying to do to inspire people in Kuwait in outer space.

In a similar vein, how do you think Spacewatch.Global can help you inspire more people and bring the voice of Orbital Space, and the space community in Kuwait, to the world.

I think that you can help by making people aware of our activities, which I know are humble activities right now. However, talking about these activities, at the regional and even international level, will maybe draw some attention from from other more experienced entities such as national space agencies or even private entities, who would like to contribute to the development of space activities in Kuwait. We welcome that. Orbital Space would love to partner with international entities and try to be their footprint in Kuwait, where we can carry out activities for the local community and perhaps even provide some of the services to the to the local market, if there is a need for it.

My final question for you, and I can anticipate your answer to this but would love to hear it from you, what is your long-term goal?

My long-term goal is to have a space programme in Kuwait. I think we can make it happen.

We do have milestones that are set on our roadmap. The first task will be to make the ground station fully-operational, and provide services to others. Our plan is to create a portal where everybody can access the ground station at no cost. Owners of CubeSat from around the world can book a time to use the station to access the CubeSat as they pass over Kuwait. I know it’s only a short pass, about 10-15 minutes, but at least it allows some time that they can use to gather data about orbital characteristics and also to send commands if needed. The next milestone is to design, build and launch a CubeSat. That would be a catalyst for others who have an ambition to build a CubeSat, whether its a group of students or maybe even an amateur. The goal is to make orbit and make space accessible to all.

Historically Kuwait has been land of ideas and entrepreneurs. The symbol of Kuwait is a ship. Hopefully someday, this ship can turn into a spaceship – that would be absolutely poetic and beautiful.

Bio: Bassam Alfeeli is a Kuwaiti scientist with expertise in advanced technologies including nanotechnology, lasers & photonics, advanced nuclear reactors design, and space technologies. He is currently a Scientific Consultant and Program Manager within Innovation and Enterprise Directorate at the Kuwait Foundation for the Advancement of Sciences (KFAS). Among his responsibilities at KFAS is organising science, technology, and innovation related learning programs that would provide local companies with tools & skills to improve business productivity and competitiveness.

Bassam holds Ph.D in MicroElctroMechanical Systems (MEMS) from Virginia Tech where he contributed to the development of micro gas analysis devices. He has served as scientist in the Nanotechnology program with the Kuwait Institute for Scientific Research, and program coordinator in the Kuwait National Nuclear Energy Committee. In 2012-2013, Bassam was a Fellow of the Kuwait-MIT Center for Natural Resources and the Environment. He has served as a visiting scientist at MIT Chemical Engineering Department, and was a visiting scientist at the Institute for Materials Research, Tohoku University, Japan.

SpaceWatch.Global thanks Dr. Bassam Alfeeli of Orbital Space Kuwait for the interview.