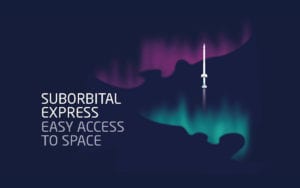 SSC is currently developing Esrange Space Center in northern Sweden with new capabilities and services. A testbed for reusable rockets is currently being established, and SSC aims at launching small satellites in a couple of years. In addition, SSC is now introducing a new flight ticket service for suborbital space flights, accessible and affordable for both current and new types of customers. The new concept introduces both the opportunity to fly fractional payloads, ranging from only a few kg up to 800 kg, and a substantially more frequent flight schedule. The flight ticket service is carried out jointly between SSC and DLR MORABA within the EuroLaunch partnership.

Swedish Space Corporation SSC has been launching more than 560 suborbital rockets from Esrange Space Center since the 1966. At Esrange, SSC also operates one of the world largest ground stations for satellite control and data reception. This legacy gives SSC a unique position in the European space community.

For scientists and researchers using microgravity as a tool, the new flight ticket concept SubOrbital Express covers a complete set of services ranging from a flight ticket including launch, quick and safe land recovery to customized services such as design and development of experiment payload modules.

“Suborbital Express combines our legacy with a new flight ticket concept. It aims for easy access to space and a maximum flexibility for the scientific community. You can fly alone in a single user mission or share the ride with others, depending on your specific needs. But the service can also be used for other purposes; test and validation of flight and space systems or educational programs giving students a once-in-a-lifetime experience. Furthermore, we welcome non-traditional users of space to book a flight ticket, it might be for promotional purposes or simply that you want to send something to space,” says Linda Lyckman, Head of Business & Technology Innovation.