On Friday 31st May 2019, almost 100 university students and young professionals huddled excitedly inside the Sir Alexander Fleming building of Imperial College London with the hope of expanding their horizons – and their networks.

These delegates were part of the lucky few that were accepted to attend the 4th annual European Space Generation Workshop (E-SGW) – a two-day event that aims to bring together fellow young space devotees to network, exchange know-how, share best practices and nurture the next generation’s perspective on space matters. “Connecting Worlds” was the theme and with delegates representing a frankly astonishing 35 countries, the E-SGW was a resounding success in this regard.

The workshop was organised by Eloise Matheson, a PhD student at Imperial College London, and Ana Raposo, an applications engineer at the European Space Agency, on behalf of the Space Generation Advisory Council (SGAC). The SGAC is a global non-governmental, non-profit organisation, currently in its 20th year, that aims to bridge the gap between the ‘space generation’ and the United Nations, space agencies, industry and academia.

Packed in amongst the busy two-day schedule, which featured a slightly worrying lack of caffeine breaks, were countless expert talks and panels filled to the brim with impressive people articulating on the highly impactful topics that are set to shape our collective future.

One such panelist was Pierre Bertrand of OneWeb, a NewSpace company headquartered in London, UK, that plans to launch 650 satellites into orbit to provide high-speed broadband and communications services to the entire planet. To meet this ambitious goal Pierre and his team have designed an automated production line in their Florida factory that enables them to manufacture 2 satellites a day.

Another personal highlight was Carissa Bryce Christensen, founder and CEO of Bryce Space and Technology, who gave a fascinating and insightful talk on the state of the global space industry. Bryce Analytics regularly publishes updated independent reports on various aspects of the space sector, from satellite revenues to the state of start-up investments worldwide.

Alan Brunstrom, a Liaison Officer from the European Space Agency, delivered a potentially quirky presentation that was in equal parts light-hearted, thought-provoking and anxiety-driving. He cautioned his audience that as society moves toward increased autonomy, we must invest our time in skills that can complement robotics and AI, but not to worry too much about our exact path as “the jobs [we] will do probably don’t exist yet”.

Among these speakers, inspiring females made up approximately one third of the total. Although perfect representation was not achieved, it was encouraging to see that most of the expert panels presented an equal 50/50 split. Further steps in the right direction came from another prominent feature of the E-SGW: Earth sustainability. The organisers made an effort with everything from the plastic-free lanyards which were designed for re-usability and collected at the end, to a complete lack of disposable coffee cups and even providing beeswax food covers as gifts for the speakers.

Although technical talks and networking took up the vast majority of the available time in the E-SGW (and rightly so), there were other tangible outcomes to be developed from this gathering of bright minds. During the conference there were four broad working group topics to be discussed, each culminating in a presentation to the delegates and a report to be published publicly. The topics followed the interests of the sponsors and were chosen to be Space Medicine sponsored by Merck KGaA; Space Policy, GNSS [Global Navigation Satellite System)] and the UN Sustainable Development Goals; Economic Development & Corporate Strategy sponsored by Caelus Partners; and finally, New Space and Constellations sponsored by industry giant Airbus.

The working group discussions took place with varying degrees of success. Personally, there was dissension among the ranks of my working group as the participants struggled to become experts in Space Policy, GNSS and the UN Sustainable Goals all within the space of a few hours. Despite this, progress was made and a series of recommendations were ultimately determined. These recommendations are to be published by the rapporteurs of the SGAC and will be provided as an input into future meetings of the UN’s Committee on the Peaceful Uses of Outer Space (COPUOS). The organisers state that the reports generated by the E-SGW2019 working groups will be published by mid-July 2019.

It remains to be seen to what extent these reports will be utilised by the powers that be. However, one thing is clear, for those who were lucky enough to attend the E-SGW 2019 a sense of optimism in our growing industry was reinvigorated, the expertise of an impressive list of speakers was disseminated to eager ears, and worlds were certainly connected.

If you are interested in hosting the European Space Generation Workshop in your country in 2020 then visit the SGAC website to submit a proposal – but hurry, applications close 25th June 2019! 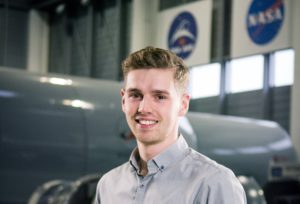 Calum Hervieu is a Spacecraft Operations Engineer at PTScientists GmbH in Berlin; a New Space company that aims to land a spacecraft on the Moon. He holds a master’s degree in Astrophysics from the University of Edinburgh and another in Space Exploration Systems from the Politecnico di Torino, Italy, which was supported by the European Space Agency. He has experience working on an astronaut training project as an intern at the European Astronaut Centre, Germany, and was selected by NASA researchers as a crew member for the Hawai’I Space Exploration Analog and Simulation (HI-SEAS) Mission VI on the Island of Hawai’i. He is also an active public speaker and occasional writer on the benefits of space exploration for our species.