#SpaceWatchGL Opinion: Addressing the limitations of our current approach to collision risk from space debris 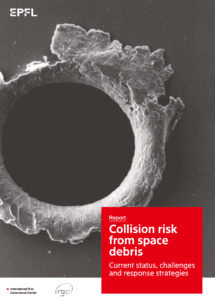 The advent of large satellite constellations has focused attention on the risks associated with increasing activity in space. The growing space traffic and debris population, which results in more conjunctions, has made apparent the limitations of our collision avoidance capabilities and processes. This observation has pushed governments and space actors to focus their attention on developing space situational awareness and space traffic management. Although these efforts are necessary to reduce collision risk, they are insufficient. Current strategies to address collision risk from space debris need to be strengthened and there are new strategies that deserve greater consideration.

The risk profile of operational spacecraft is dominated by lethal non-trackable (LNT) debris—objects too small to be tracked with current technologies but which can still result in the disabling of a spacecraft. These objects cannot be dodged by operational spacecraft and are far more numerous than the larger objects tracked by radars and optical sensors. The large population of derelict objects deposited in orbit is clustered at different altitudes, posing a significant risk of generating more LNT debris through collisions. The extent to which these objects pose a greater risk to the space environment than large constellations is debated. It is highly dependent on the size and altitude of the constellations finally deployed, as well as on the level of mitigation measures implemented by constellation operators.

Decision-making in this domain is highly challenging. Collision risk is technically complex, with many interconnections between risk elements, which are difficult to assess, in terms of probability of occurrence, severity, economic costs and wider impacts. The space ecosystem in which the risk develops also exhibit a complex pattern of interconnections, with numerous links to other systems on Earth. There is pervasive uncertainty regarding the current risk level and the effect of mitigation measures, as well as ambiguity as to diverse space actors’ current and future behaviour. Policymakers and space actors have difficulty evaluating the severity of the risk and their tolerance to it. Prioritising response strategies is complicated by uncertainty relating to the cost of damage to satellites and disruption of services that rely on them. There is a lack of data necessary to conduct cost-benefit analyses of mitigation and remediation approaches.

Against this backdrop, the EPFL International Risk Governance Center (IRGC) has recently published a report entitled “Collision risks from space debris: Current status, challenges and response strategies”. The report seeks to provide fact-based clarification of important technical, regulatory and economic aspects of collision risk, as a foundation for much-needed deliberations about the policy options in this area.

The current response strategy to ensure both the near-term safety of operations and the long-term stability of the space environment relies on mitigation: technical procedures and requirements for operational spacecraft aimed at reducing the likelihood that debris will be created. Space debris mitigation includes spacecraft shielding, collision avoidance manoeuvres, post-mission disposal and removing stored energy at end-of-life to limit the probability of an accidental explosion. Non-binding internationally agreed-upon guidelines recommend the use of these technical measures and are supplemented by technical standards and industry-led best practices. International guidelines on space debris mitigation are often integrated as part of requirements in national licensing procedures.

The current response strategy has a number of limitations. First, it mainly addresses the creation of new pieces of debris, without tackling the legacy of derelict objects. Second, overall compliance with internationally agreed-upon guidelines is low. Third, national policies are non-uniform and do not always implement these guidelines. Fourth, national requirements prioritise ex-ante measures to minimise a mission’s potential space debris creation; once in orbit, the policies in place only weakly incentivise operators to reduce the risk of debris creation.

Remediation lacks funding and leadership from major spacefaring nations. Different methods have been proposed, such as actively removing derelict objects from orbit (active debris removal), lowering the probability of a predicted collision by affecting the trajectory of one of the two pieces of debris prior to the predicted collision time (just-in-time collision avoidance) and upgrading derelict objects with collision avoidance capabilities (nanotugs). These methods have different risk-risk trade-offs, are at a different stage of development and will likely result in different costs. Effective management of the risk from derelict objects probably requires funding the development of these three methods.

To incentivise space actors to commit to their space debris mitigation plan and enhance adherence to existing guidelines a number of market-based solutions have been proposed. Some of them would not only incentivise risk-reducing behaviours in space, but would also provide a fund which could be channelled to the development and implementation of remediation. Insurance is a key example, but, given the uncertain legal framework and the remote nature of space, it is unlikely to reduce risk efficiently. Third-party liability (TPL) insurance premium rates are priced according to the risk of a claim and not the probability of a collision. As the likelihood of a claim in case of a collision is currently low, the pricing mechanism of TPL insurance premium rates cannot induce risk-reducing behaviours. Marketable permits (similar to an emissions trading scheme for greenhouse gases) and regulatory fees (similar to a carbon tax) could be an efficient way of reducing risk. Many forms of regulatory fees such as taxes collected on launch, for orbital use or for debris generation have been proposed. Envisioned mechanisms include deposit and refund, and performance bond schemes. However, most proposals have only been developed at the abstract level and do not provide details on how they would be implemented. In particular, discussions about the unit of risk driving liability, the trigger of the fee liability or its calculation period, and the enforcement mechanism are lacking. More research and concrete proposals in this area are needed. Although research can help clarify the trade-offs between different implementations, acceptable options will likely be determined by actors’ preferences.

The intensification of space activities and our economies’ increased reliance on space infrastructure require more fit-for-purpose technical and governance regimes. This article and IRGC’s report outlined some of the limitations of the current approach to space debris, and challenges to addressing collision risk. More concrete policy options that should be pursued will follow in a subsequent policy brief and article.

The EPFL International Risk Governance Center (IRGC) is an interdisciplinary unit dedicated to extending knowledge about the increasingly complex, uncertain and ambiguous risks that affect society. We develop risk governance strategies that involve all key stakeholder groups, including citizens, governments, businesses and academia.

Romain Buchs is IRGC’s scientific assistant. He leads IRGC’s project with the EPFL Space Center (eSpace) and Space Innovation on evaluating and managing risks related to space debris, and conducts broader work on space sustainability. Romain Buchs holds an MSc in Science, Technology and Policy from ETH Zurich and an MSc in Physics from EPFL.

Space Café Radio – on tour in Lausanne – with Walt Everetts