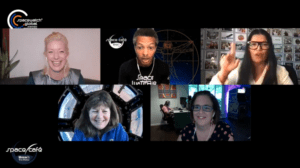 If money and resources weren’t an issue, could all of humanity participate in the space domain as a normal, everyday activity? While space is slowly being opened up to “general admission”, almost all planned commercial space excursions involve the very rich.

So far, less than 600 people have been into space – that’s about 0.000008 percent of the world’s population. So, does the rise of commercial space flight mean everyone on earth will have the chance to go to space? Will it be possible? How do we train and engage people in this area?

Here’s what the experts think.

Dr Cady Coleman says that, while currently there is rigorous training involved to prepare voyagers for space flight, automatic systems are beginning to replace human-controlled processes, meaning civilians could one day venture into space with minimal technical training.

“We are already having more and more faith in automatic systems. These SpaceX missions show you that… in a lot of things basically software could do better than a human. The software often could save you when a human being really couldn’t.”

“I focus on helping students design these immersive experiences so that they can simulate what you’re doing in space under water.”

With so few people having been outside the Earth’s atmosphere, Deborah Sass says more can be done to reposition space so that it better aligns with young peoples’ ambitions. Deborah founded Space Hero which is a global casting show that will send one winner to the ISS for a 10 day trip.

“Let’s face it, there’s less than 600 people in the last 60 years that have ever done it. So you’re talking about the 1 percent of the 1 percent. Whereas if we can somehow make it more pop culture, as the technology keeps going, you’ve got this opportunity to have millions of millions of people wanting to be part of it, not just because they’re the smartest kid in the school.”

The first civilian in space – a Columbus moment?

The moment when a civilian – not an astronaut, engineer, scientist, military officer or wealthy individual – goes to space, will be history-making. Deborah Sass believes it will be an inspiring moment that will finally connect the everyday person with space.

“The first normal person to go to space is going to be the biggest thing that anybody will watch. And it’s never happened before. I mean, that is a Columbus moment.”

The first civilian in space could also be a boon for diversity and inclusion, with the European Space Agency recently beginning recruitment for different abled persons to go into space. Associate Professor Pell says such measures begin to “unlock” our thinking.

“We can look at the extraordinary people who have gone before, but also to start to re-conceive what this new frontier means when we are talking about diversity and inclusion.”

“We can start to re-conceive of the “us and them”. I think that divide can slip slide a little bit more into the future.”

According to Dr Coleman, it could also bring a much-needed perspective to the sector and connect humanity with its own formation.

“I think everyone belongs. Certainly, everybody has different perspectives. And something that we have done, I would say, quite poorly to date is to include enough perspectives.”

“We’re all from there. And that means that space really belongs to all of us. To have more and more people go is so inspiring.”

“When people that you can relate to get to go, it changes something inside of you.”

To listen to more of this episode, you can watch the full program here: