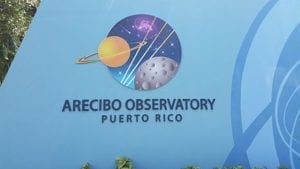 “The instrument platform of the 305m telescope at Arecibo Observatory in Puerto Rico fell overnight,” the U.S. National Science Foundation (NSF), the operator of the telescope, tweeted. “No injuries were reported. NSF is working with stakeholders to assess the situation. Our top priority is maintaining safety.”

The Puerto Rican news platform NotiCel published devastating photos of the collapsed observatory. The photos show the degree of destruction of the telescope that was decommissioned by NSF last week and has raised a worldwide wave of sympathy and solidarity, with astronauts, scientists and students launching petitions to save the 57 years old telescope.

The Arecibo telescope played a major role in the observation of space and detection of asteroids over nearly six decades. It was long time the largest single aperture telescope in the world, until it was surpassed in 2016 by the 500 meter Aperture Spherical Telescope FAST in China.

The Arecibo observatory became prominent far beyond the scientific world when some spectacular scenes of the James Bond film “Golden Eye” were shot there.

The petition to the U.S. White House to save the telescope operates under the Twitter account “SavetheAreciboObservatory” and the hashtag “WhatAreciboMeanstoMe”.