Cyberattacks are exponentially increasing over time, improving the security of communications is crucial for guaranteeing the protection of sensitive information for states and individuals. For states, securing communications is mandatory for a strategic geopolitical influence.

Most technologies have been based on classical laws of physics. Modern communication technology transfers encrypted data with complex mathematical algorithms. The complexity of these algorithms ensures that a third parties cannot easily crack them. However, with stronger computing power and the increasing sophistication of hacking technologies, such methods of communication are increasingly vulnerable to interference. The world’s first quantum-enabled satellite is the Chinese Satellite (Micius). The purpose of the mission is to investigate space-based quantum communications for a couple of years in order to create future hack-proof communication networks.

In a classical computer, each processing is a combination of bits. A bit can either be zero or one. A qubit, the quantum bit, can be a zero and a one at the same time. So, processing qubits is processing several combinations of zeroes and ones simultaneously, and the increased speed of quantum computing comes from exploiting this parallelism.

According to quantum theory, subatomic particles can act as if they are in two places at once. This property is manipulated so that a particle can adopt either one of two states. If the particle is not observed, it will be in a state of superposition.

There have been successful quantum encryption experiments with some limitation. The messages were sent through optical fibers, the signal would be absorbed by the medium and then it won´t be possible to make for long distance. Making such communications over long distances would require “quantum repeaters” that are devices that capture and retransmit the quantum information.

China found another solution by beaming entangled photons through the vacuum of space, so they won’t be absorbed.

Micius satellite works by firing a laser through a crystal creating a pair in a state of entanglement. A half of each pair is sent to two separate stations on earth.

The objective of this method is to generate communication keys encrypted with an assembly of entangled photons. The information that will be transmitted will be encoded by a set of random numbers generated between the transmitter and the receiver. If a hacker tries to spy or interfere with one of the beams of entangled photons, the encryption key will be changed and will become unreadable due to the “observer effect “of Quantum theory.  In consequence, the transmitter will be able to change the information in security.

The Quantum communication in Military and defense will enable China to be a strong leader in military sophistication and it will empower its geopolitical influence, decreasing by that the US authority.

On another hand, USA is also making research on Quantum Technologies but the US investments remains limited compared to ones in China and Europe. Which is making China the leader in quantum communication. But the USA recognizes the importance of this filed and started making more efforts technically and financially. But the question remains, who will be able to reach the frontier before?

Following the Chinese space strategy, in the last years, China invested a lot in technological development including the pioneer space program, her aim was to reach a dominance in air and force. Micius satellite will be able to make a boom in military advancement and an information dominance. This space program is symptomatic to the Chinese strategy on technological development.

The first Chinese satellite was launched after USA and Russia in 1970. The strategy followed afterwards enhanced an exponential growth in space and technological development by a huge financial investment gained after an exponential economical growth. Beidou ( China space navigation satellite) provides precise geolocation information for Chinese weapon systems and communication coverage for its military. Which is a strength point on military and geopolitical aspects.

The policy is still going in that direction by having a global network coverage of 35 Chinese satellites. The Chinese space program launched already two space laboratories, its aim is the launch of  a permanent manned space station in 2022 knowing that the international space station will retire before 2028.

In consequence, China would become the only country with a space station, making it necessary to the countries and in consequence a center of power. More Chinese space missions including robotics and AI took place, preparing for the next generation space technology. Quantum is the accelerator to reach the ultimate goal of this space program and then became the first priority in the technological researches. By 2030, China aims to establish a network of quantum satellites supporting a quantum internet.

The network of quantum satellites (2030 China Project) is aiming to increase the record distance for successful quantum entanglement between two points on Earth. Technically, the lasers being used to beam the entangled photons between the stations will have to achieve a high level of precision to reach the selected targets. But the limitations are:

Rania Toukebri is a Systems engineer for spacecrafts, Regional  Coordinator for Africa in Space Generation Advisory Council in support of the United Nations, Space strategy consultant and Cofounder of HudumaPlus company. 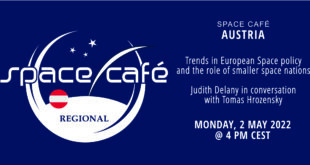