Paris, 17 November 2020. – A Vega rocket with France’s Taranis and Spain’s SEOSAT-Ingenio satellites on board failed yesterday, Arianespace said; both satellites were lost.

“8 minutes after liftoff of Vega mission VV17, following the first ignition of the engine of the Avum upper stage, a deviation of trajectory was identified, entailing the loss of the mission,” Arianespace announced. “Telemetry data analyses are in progress to determine the cause of this failure.”

The four-stage Vega rocket suffered the major failure after a normal lift-off on Monday evening local time, from the Guiana Space Center in Kourou.

The launcher was carrying the Spanish Earth observation satellite SEOSAT-Ingenio and the French weather research satellite Taranis. Both were lost.

The last time a Vega rocket failed was in July 2019, with Vega’s 15th mission, and its very first failure. The last Vega mission VV16 in September 2020, which carried 53 small satellites into orbit, was an overwhelming success. 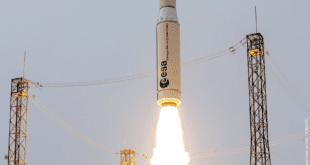