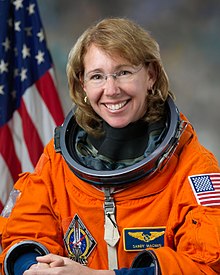 “The main goal of Women in Aerospace is to improve the representation of women in aerospace and thus to help the youngest to find their own career path”. This statement, made by the Director of the United Nations Office for Outer Space Affairs (UNOOSA), Simonetta di Pippo, shows the importance of empowering young women in space.

At the 62nd session of the Committee on the Peaceful Uses of Outer Space (COPUOS), the United Nations Office for Outer Space Affairs (UNOOSA) and the Permanent Mission of the United States of America to the International Organizations in Vienna hosted a side event which goes along with the Space for Women project, initiated by UNOOSA . The project will contribute to achieving gender equality and enabling girls and women to engage in space science, technology, innovation and exploration. Furthermore it will offer a global “Space for Women Champions” network of senior professionals from space agencies, industry and academia, inter alia to help advise and mentor women pursuing careers in the space industry. Achieving gender equality is a vital challenge in our world. Though there have been improvements in this regard, women are still underrepresented in scientific careers, with the greatest inequality in engineering, computer science, and physical sciences. The Space for Women project aligns with the Sustainable Development Agenda 2030, adopted by all United Nations Member States and specifically Goal SDG 4 (quality education) and SDG 5 (gender equality). 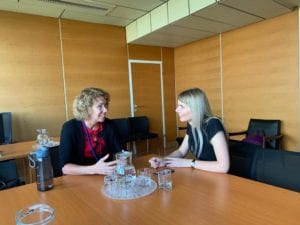 During the event, SpaceWatch.Global’s Ksenia Synkova was lucky enough to interview a two-time NASA space traveller, Sandra Hall Magnus, who shared the highlights of her experiences in space.

Sandy, thanks for taking time to talk to SpaceWatch.Global. Could you please tell us when you started developing an interest in becoming an astronaut?

Yes, I was middle school somewhere around age 11, or 12. And the idea of ​​flying in space caught my imagination, and I decided to be an astronaut.

Was there anyone who inspired you to pursue a career in space?

Well, my parents were probably my biggest inspiration. Because when I told them I wanted to be an astronaut they said: “If that’s what you want to do, then you should try it.” I had great support from them which has been invaluable. They didn’t discourage me by telling me I couldn’t do it or I was just a little girl in a small town and not able to have big dreams. They told me to go for it. So, that’s really what set me off on this path.

Wow! That’s incredible … How did you find the astronaut training? Is there any difference between training for men and women?

The training is the same for both men and women. I think the most challenging part of the training was the space suits we use for EVAs (spacewalks) because they were not designed for women! The sizes of the hard upper torsos (which is a central component of a space suit) were medium, large and very large. They were not available in smaller sizes and were designed for broad shoulders. Women, of course, do not have as broad shoulders as men. So this meant that we had a limited range of motion in comparison to a person with broad shoulders which could be a little constraining. And that took some getting used to.

I hope now, is there a space suit that is sized for women?

Not yet, but there will hopefully be smaller ones for women in the next generation of suits. EVA suits are very expensive to make. When they designed the suits in the early 1980s, there was no expectation that there would be a lot of spacewalks because the Hubble Space Telescope was the main spacewalk requirement. However, when the built space station was built, it required 200 spacewalks, which meant everybody, both men and women were going to have to carry out spacewalks. However, because the suits were so expensive to make, they did not build any more suits.

You are a role model for many girls and women. How can you make an impact on the next generation of women and how do you hope to inspire them? What would be your advice to them? 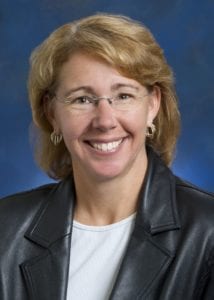 Well, I think the most important thing is for young women to see women, not just myself, but other successful women and dream that they can do that too, right? A lot of people say: “oh, you’re an astronaut? I could never do that”. They think you have to be special in some way to become an astronaut. My answer is: “no, you don’t”. I was just a little girl in a middle of the United States. There was nothing special about my family. There’s nothing special about me, I just liked math and science. And I worked really hard. And so I think it’s really important for young people to know that if you have a dream and you really work hard, you should really go for it and try it because it can happen. It can happen to you. It does not happen to other people. That’s really important.

I believe it’s very motivating for young girls, especially who wants to pursue the career in space.

That’s why role models are so important. I mean, not just an astronaut, but any successful person. It’s critical that those who have achieved their dreams talk to young people around them and show the next generation that they can achieve their dreams as well.

Thanks for sharing this. Let’s switch to your space experience. What was your perspective of the Earth from space? How did it make you feel to see the Earth from this position? What does it mean for you?

You talk to anybody who’s seen the Earth from space, and you realise that you do not see countries.  You just see the home of human beings. It’s our home, and it’s all connected – everything that’s happening in the world today, no matter where people live. You realise that if you live in Switzerland, for example, what happens there is affecting people in Russia, it’s affecting people in South Africa. On a daily basis, you do not experience the world that way because you have a little piece of it in your daily life. On orbit, when you’re looking at the Earth from the space station, you experience the whole world at one time. And it’s really obvious that it’s one thing, not a bunch of small things. It’s one big thing.

What was your first impression, seeing Earth from space?

My first impression, actually, when I looked out the window on my first mission was, oh my goodness, our atmosphere is so thin! It’s this eggshell thin layer of air that’s covering our planet. And it looks really fragile. It looks like all you have to do is blow on it and all of the air would float into the universe. When you see the Earth from space you do not take it for granted, because it looks very fragile.

And what is the first feeling when you get back to Earth?

That was really interesting because it was all about gravity. You do not understand gravity because you’ve never been out of it. When you leave gravity, and you come back to gravity, you realize how horrible gravity is. I mean, there’s this force that’s holding us down on this planet, that we have to conquer every time we move and stand up to walk. To get out of bed in the morning or to do anything, you have to use a huge amount of energy, because of this horrible force called gravity. It’s really amazing to live in an environment where gravity does not exist. It’s so easy to get things done. It’s so free. And to come back into that force, and realise that we live here all the time. It’s like, wow, that’s amazing! This is horrible!

Now I want to know what this feels like as well!

It’s really amazing. We really do not understand gravity. We do not understand physics about why two masses attract each other and create a force. We can describe it because we have equations. But it makes no sense to me.

How does a typical day look like on ISS?

We’re actually very busy on the space station. We start the day with a planning conference with all five control centres around the world. We might be doing technology demonstrations, robotics, spacewalks, public outreach (we are talking to students around the world), housecleaning, exercise – every day could comprise any one of those things. There’s a tonne of science that’s coming up from all over the world. Of course, you have things that break down, so you have to fix those too. We work all day. Then we have a planning conference at the end of the day to talk about what we did, what we did not get done and what’s on the schedule for tomorrow. And then in the evening, we do not go anywhere. The next day is just like going to work. 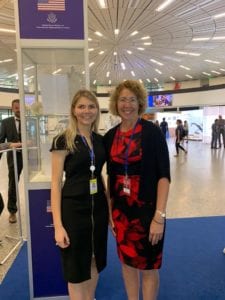 It is very, very busy.

Tell me Sandy, what is your most memorable moment while being in outer space?

Wow, that’s a hard one because I have so many. But I want to share one from my last mission, which is the last space shuttle mission. When I flew on my expedition and lived there, the Cupola module was not on the space station. But when I flew on my very last mission, STS 135, on the space shuttle mission in 2011, the Cupola was there. The Cupola is a special module that has windows all the way around it. So it’s like being in a dome of windows. In the evenings, when everyone was sleeping, I would go to the Cupola. And I would spend 90 minutes, which is one revolution around the earth. And I would watch the Earth go by, because I could see the earth all around me in the 360 ​​degree window. I felt like I had the whole Space Station to myself. And I was enjoying the earth, just on my own.

Thank you for sharing your time with us and our readers. And yeah, it’s really great.

I’m happy to do it. Thank you very much!

SpaceWatch.Global thanks Sandy Magnus for the interview.