Farnborough, 7 September 2022. – Firefly’s second attempt at reaching orbit, Alpha Flight 2 “To the black” will carry ATHENA, Europe’s first Electrospray thruster, a propulsion technology aboard two of the satellites stored inside the rocket.

ATHENA (Adaptable THruster based on Electrospray for NAnosatellites) was developed by Spanish startup Ienai Space. The technology demonstrators for the commercial thrusters will be carried by two 40-gram GENESIS pico-satellites.

Electrospray technology is aiming to replace plasma-based technologies which have dominated the field since the first electric rocket. flown in 1964 aboard the SERT-1 mission. Most modern Electrosprays use ionic liquids as propellants that are capable to generate thrust by applying electric fields. The technology works best below the kilowatt range, and down to very-low powers of 10s of Watts.

The ATHENA demonstrator is scheduled to launch from Vandenberg Space Force Base in California on 11th September 11th. The mission will last for several weeks, and will be concluded by planned satellite de-orbiting. The focus will be to demonstrate integration with the spacecraft as well as operation in harsh space conditions.

After a successful demonstration, the technology will be integrated on a high-maneuverability 20W-class ATHENA thruster, due for commercialization in 2023. In addition, a 100W-class version is planned for 2024.

Share
Previous Ramon.Space and Lulav Space partner to  navigate the Beresheet 2 lunar missions
Next Space Café Israel by Meidad Pariente: Dr. Ana Heller – Never give up on your dreams 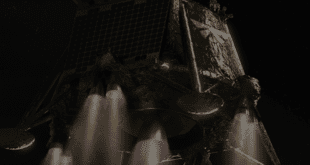