European Rover Challenge goes into its 7th edition 2021 in Poland

Final preparations for the seventh edition of the European Rover Challenge are underway. This year’s event will be held on 10-12 September at the Kielce University of Technology in Poland. For the first time in history, worldwide university teams will compete in two formulas: onsite and remote. Visitors will take part in three-day lectures on flights to Mars, the commercialization of the Moon, and the use of space technologies on Earth. Additionally, the world’s largest active Martian volcano will appear on the track of ERC.

The seventh edition of the European Rover Challenge will begin on 10 September at the Kielce University of Technology. This is the first time in the history of the competition that contestants will compete in two formulas. In the ONSITE competition, teams will use a rover designed to complete tasks modelled on the challenges faced by robots in actual Martian missions. Contestants participating in the REMOTE formula will perform tasks using the Leo rover designed by a Polish start-up. Thanks to the ability to control the rover from anywhere in the world, the teams have the possibility of even more precise mapping of the work of ESA and NASA engineers. This year almost 40 teams from three continents qualified for the final stage of the competition.

The second part of the event is the Inspiration Zone, with numerous lectures and workshops. Each of the three days will have a leitmotif. On Friday, September 10, experts will present Mars and plans for human-crewed missions to the Red Planet. The second day of the ERC will be devoted to the Moon and its business and economic potential and the commercialization of the space sector. This year’s edition of the event will end with talks on space technologies on Earth and the successes of Polish and foreign companies in this field. The speakers will include experts from global organizations and national representatives of the space sector. The invitation to the event was accepted, among others, by Dr. Robert Zubrin – founder and president of Mars Society, Cesar Urrutia – co-founder of SPACE AG, Mayank – founder and managing director of Celestial Space Technologies GmbH, and Billy Almon, astrobiofuturist and former creative director at Walt Disney Imagineering. 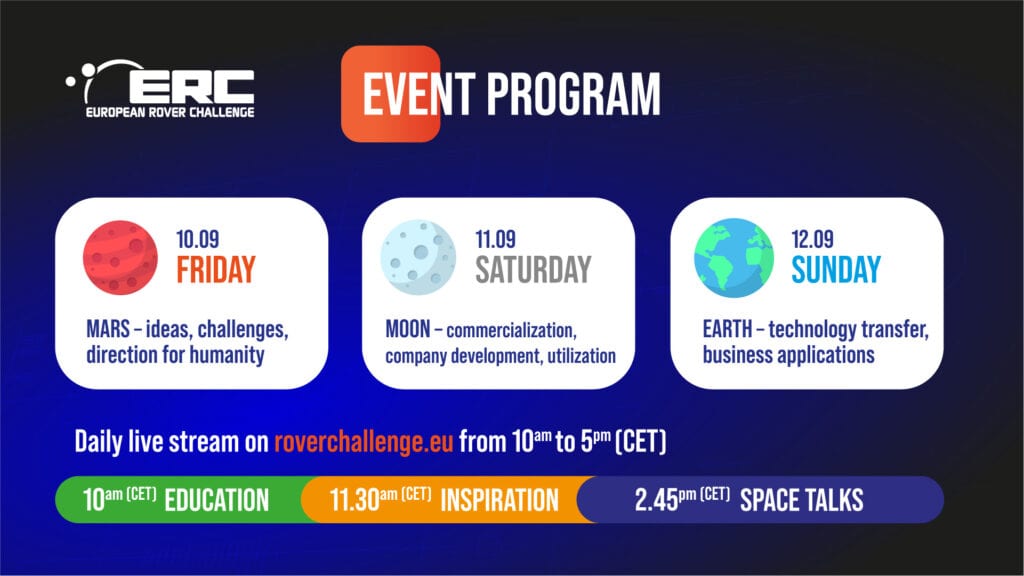 One of the biggest attractions of this year’s edition is Marsyard – a Martian track on which rovers will drive. The organizers decided that Poland will host the world’s largest active Martian volcano this year, almost two meters high. The precise reconstruction of the geological history of the soil in the Elysium Planitia area makes the Kielce project the only installation of this type in the world.  The teams’ struggles in the competition and the lectures delivered by experts will also be accessible online. Streaming from all three days of the European Rover Challenge will be available at roverchallenge.eu, the event website on Facebook, and the SpaceTalks channel on YouTube. Admission to the event is free.

The European Rover Challenge is the largest space event in Europe, combining the international competition of Mars rovers with scientific and technological shows. Following the slogan that says “We inspire a new generation”, the organizers have been bringing space closer to the general public and making them aware of the growing role of modern technologies in everyday life since 2014. ERC is also a meeting place for representatives of the international world of science and business interested in using space and robotic technologies. The project is co-financed by the “Social Responsibility of Science” program of the Minister of Education and Science.

The event is co-organized by the European Space Foundation, the “Starachowice” S.A. Special Economic Zone, the Świętokrzyskie Voivodeship, and the Kielce University of Technology. The strategic partner of the event is the Poznan Supercomputing and Networking Centre. The City of Kielce acts as the host city. The European Space Agency took the honorary patronage over the event, the Minister of Education and Science, the Minister of Foreign Affairs, the Polish Space Industry Association, and the Polish Optical Internet – PIONIER.