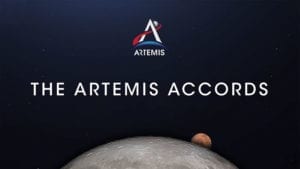 Paris, 15 November 2020. – Ukraine is the ninth country that has signed the NASA Artemis Accords, the Ukrainian national space agency announced on its website, without giving further details.

The Artemis Accords set out principles for Moon and Mars missions and exploration, based on the Outer Space Treaty of 1967, and aim at advancing the safety and sustainability of space and frame exploration, science and commercial missions.

“International cooperation on Artemis is intended not only to bolster space exploration but to enhance peaceful relationships between nations,” NASA says. “Therefore, at the core of the Artemis Accords is the requirement that all activities will be conducted for peaceful purposes, per the tenets of the Outer Space Treaty.”