The ESPI Autumn Conference is an annual event where public and private stakeholders of the space sector come together to discuss issues that affect Europe and the rest of the world. Due to the COVID-19 pandemic, the 14th edition took place online from 28 September to 2 October 2020.


Beyond the pandemic and its unprecedented implications, 2020 is also a landmark year for the European space sector with many important and long-expected milestones and decisions. Keeping in mind the repeated calls from European officials to collectively think out a new vision for space, this edition of the ESPI Autumn Conference was a great opportunity to take stock of Europe’s achievements and invite high-level representatives to look forward and share their own vision for Europe in space and space in Europe beyond 2030.

The conference was organised around five thematic sessions focusing on major ambitions of the European political agenda:

Despite the diversity of topics addressed, a few transversal themes stood out, underlining major stakes for the European approach to space in the coming decade. 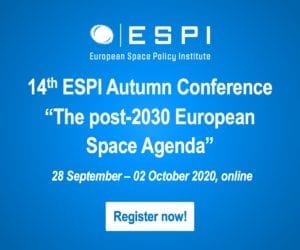 The programme of the conference allowed speakers to reflect on the value of space for European ambitions and major initiatives such as: the Green Deal; the Digital Agenda; the security needs of the continent; and the objective to make “a more geopolitical Europe”.

It was recalled that space already contributes significantly to European policies by providing tools to monitor situations of interest and offering solutions to help solve the problems identified. For instance, in the context of European environmental efforts, space supplies extensive data at global level to assess climate change and the impact of human activities on it. Similarly, in the security field, the availability of satellite imagery has been a major asset to monitor illegal activities (e.g. drug cultivation in South America or illegal migration flows towards Europe). Finally, the COVID-19 pandemic demonstrated the usefulness of satcoms in improving connectivity, e.g. for caregivers deployed in the field or for telework.

Some steps have already been taken to mainstream space services across other policies. Thus, the creation of the DG DEFIS in December 2019 aimed at highlighting the complementarity between the space and defence sectors. This decision could help illustrate the benefits of further integrating space with other domains, such as transport, energy or urbanism sectors.

Deepening the contribution of space to European policies should be a key objective. This prospect faces opportunities (e.g. integration of users in the present and future development of Copernicus) but also challenges (e.g. need to raise awareness on the benefits provided by space). Moreover, reaching this objective implies that industry and public actors share the stakes at hand. While industry will have to innovate and promote space systems and services, public actors must coordinate and implement the necessary and/or lacking mechanisms that will allow them to fully leverage the benefits of the infrastructure they helped to put in orbit. It was recalled during the conference that institutional demand was six to seven times lower in Europe compared to the United States. Therefore, according to several speakers, appropriate measures could encompass the consolidation of institutional demand or the enactment of an industrial space policy, which would make the European industry more competitive and allow it to meet the needs and ambitions of the continent.

Speakers of the conference also suggested that greater engagement with other sectors is going to be unavoidable, as requirements to implement synergies with terrestrial infrastructures are expected to increase in coming years. Moreover, this integration would benefit European systems by increasing their resilience.

In the telecom sector, the 5G will work only if terrestrial and space solutions are integrated together; likewise, the development of HAPS will allow satcom and terrestrial operators to join their forces to provide connectivity to remote areas. The panel on “Space for Security” raised similar questions regarding the use of space and non-space (aerial, in-situ) sources of information in the conduct of security missions. Finding ways to ensure their more complementary and combined use, including with new technologies (e.g. Artificial Intelligence to process data), in order to satisfy the needs of security actors, will probably grow in importance in coming years.

The convergence between the two sectors will bring up new challenges, such as creating the capacity to provide a seamless service to customers. Therefore, the relationship between space and terrestrial industry will have to be reexamined. While they will remain competitors, actors from both sectors will have to increasingly cooperate if they want to respond to users’ demands.

Keynote speakers and panelists shared quite consensually the conviction that the space ecosystem is quickly mutating and that many challenges ahead of the European space sector have a strong, sometimes dominant, international dimension.

The importance of cooperation in the capacity of the European space sector to further innovate and move forward was highlighted. This cooperation will continue taking place through several channels: between providers and users of space services, to define ambitious projects; between organisations, to facilitate the use of space data by third parties; between public and private actors, to create frameworks favouring European industry; between nations, to increase the number of spacefaring countries; and between all stakeholders, to ensure the sustainability of space activities.

However, the quickly evolving world that Europe is facing was also a source of concern. The space domain is becoming increasingly competitive and conflictual, as illustrated by the recent establishment of dedicated military forces. In addition, European stakeholders will have to adapt to a changing playing field, where rules for both cooperation and competition are being transformed. Thus, with the advent of new actors and the emergence of new concepts, elements making up competitiveness will evolve by 2030. Similarly, the new models proposed for cooperative endeavours may create difficulties. For instance, the Artemis Accords make cooperation with the United States on its Moon programme conditional upon the acceptance of principles unilaterally endorsed by this country.

This changing playing field creates a real challenge for Europe, which will have to express its determination and take decisions very soon to succeed in its ambitions. After all, it is the place of Europe as a competitor on commercial markets, as a partner in international endeavours and even as an actor in outer space that is at stake.

There can be no post-2030 agenda without strategic autonomy, which needs to become a shared concern

An overarching concern of European stakeholders that was also stressed, during the five sessions of the Autumn Conference is the need to ensure the strategic autonomy of Europe in space, although this concept remains fuzzy. The objective was widely shared by speakers of the Conference, who proposed several measures to reach it:

Moreover, strategic autonomy is not limited to industrial capacities and access to space but also encompasses all activities related to the security of European space infrastructure in a sustainable space environment.

Indeed, if the growth of the space sector is a real opportunity, all panelists recognised that the ensuing multiplication of satellite launches creates real risks for assets in space. Thus, the development of capabilities able to detect objects in orbit is becoming a priority to protect spacecraft and continue benefitting from their increasingly vital services. Three types of actions to preserve the space environment were identified, namely preventive actions (regulation and standardisation measures), monitoring actions (surveillance and tracking involving public and private means and efforts) and corrective actions (development of capabilities such as active debris removal and in-orbit servicing).

Finally, strategic autonomy is a relative concept, which is inherently dependent on the progress of other space powers. Accordingly, the rising ambitions of these rivals must prompt Europe to keep pace to at least maintain an acceptable level of independence. For this reason, programmes and achievements in the rest of the world must be constantly monitored and accounted for when devising the European space strategy.

Currently, Europe is at a crossroads, as actions taken today will have consequences in the long term. Therefore, the continent must already prepare itself by anticipating the evolution of the space landscape in the next twenty years and take steps in line with this assessment. This concern was the rationale behind ESPI’s decision to make “The post-2030 European Space Agenda” the topic of this year’s Autumn Conference. We believe that these contributions will nurture the ongoing debates on this prominent topic. 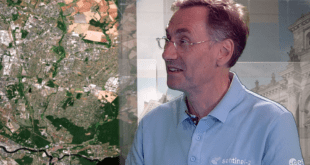 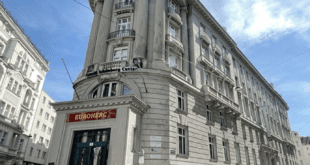 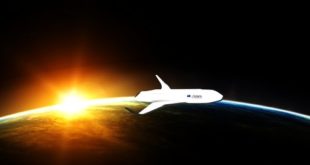