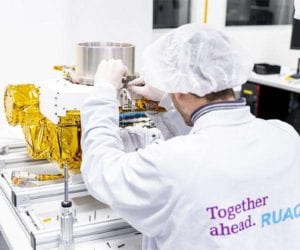 A United Launch Alliance (ULA) Atlas V rocket with Sun Explorer Solar Orbiter is scheduled to launch from Cape Canaveral, Florida on 7-8 February 2020. RUAG Space is supplying the thermal insulation, the structure of the satellite, and the on-board computer.

“We have delivered key components, which enable this important science mission” said Peter Guggenbach, executive vice president of RUAG Space. “Our computer controls the satellite, stores all scientific data, and communicates with Earth; our thermal insulation keeps it at the right temperature and our structures hold it stable.”

The satellite will get very close to the Sun and will be the first to provide close-up images of the Sun’s polar regions. It will study the solar wind, the so-called space weather, and all layers of the Sun except its core.

Because of its extreme proximity to the Sun, Solar Orbiter’s heat shield will be exposed to 13 times more solar radiation than on Earth.

Some parts of the spacecraft will reach extremely high temperatures up to several hundred degrees Celsius. RUAG Space has developed a special thermal insulation for these conditions, meeting exactly the requirements for Solar Orbiter. The spacecraft structure, also supplied by RUAG Space, is made of a carbon fiber backbone in cylinder form and a number of aluminum sandwich panels to which all the subsystems are mounted.