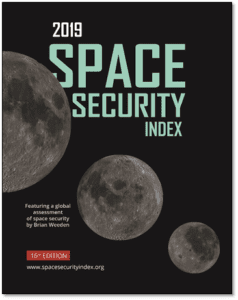 As part of the partnership between SpaceWatch.Global and Project Ploughshares, we have been granted permission to publish selected articles. This is “At the breaking point: New report reveals weaknesses in outer space security”, originally published on 11 November 2019.

This information, and much more, is provided and analyzed in Space Security Index 2019, the 16thannual report on the security of outer space produced by the partners of the Space Security Index project. This newly released volume tracks developments and activities in 2018 related to four indicators of space security: environmental sustainability, access to and use of space, technologies for space security, and space governance.

According to managing editor Dr. Jessica West, who is a Senior Researcher with the Canadian nonprofit peace research organization Project Ploughshares, the growing use of space reveals both the importance of outer space as an essential resource and the strains on space governance frameworks.

Alongside a renewed drive for lunar exploration was a growing view of outer space as the site of military action, even warfighting. Key states continued to develop and demonstrate anti-satellite capabilities. Satellites cloaked in secrecy conducted close approaches to other objects in orbit.

There were and are few governance mechanisms that guide the use of new technologies in space. No agreements restrict the use of force in outer space. Dr. Brian Weeden of Secure World Foundation, who authored the volume’s Global Assessment, acknowledges that, while the year’s challenges were not new, it is “likely true that we have reached a turning point.”

Still, there was good news. More states adopted national laws and regulations to oversee domestic space activities. The United States initiated the first space traffic management regime. A set of 21 voluntary guidelines to enhance the long-term sustainability of space activities was adopted by the UN Committee on the Peaceful Uses of Outer Space (COPUOS). Commercial, civil society, and academic organizations developed standards for space activities, such as rendezvous and proximity operations and lunar exploration.

Weeden argues that “many of these actions were small in size or scope, but I would not belittle their potential impact.” Indeed, “it has become almost a cliché to state that space governance is at a breaking point, and yet it has not, in fact, broken.”

Space Security Index 2019 received its global launch as part of an October event in New York organized by the UN Institute for Disarmament Research, Secure World Foundation, and Project Ploughshares. Attended by government, business, and civil-society stakeholders, the gathering emphasized the vulnerability of space assets amid rising military tensions. Such tensions also inhibit efforts to make outer space safer through the use of dual-use technologies such as debris removal and satellite servicing, which require regulation, transparency, and cooperation.

As Jessica West observes, space security is global security. Military, humanitarian, socioeconomic, and environmental security on Earth all depend on our ability to access and use services from outer space. The maintenance of security in outer space is in everyone’s interest.

Project Ploughshares is a leading partner in the Space Security Index project. Other 2018 partners were The Simons Foundation Canada; the Institute of Air and Space Law at McGill University in Montreal, Quebec; the Research Unit on Military Law and Ethics at the University of Adelaide Law School in Australia; and the Space Policy Institute at The George Washington University in Washington, D.C.

Rights reserved – this publication is reproduced with permission. The original was published : https://ploughshares.ca/2019/11/at-the-breaking-point-new-report-reveals-weaknesses-in-outer-space-security/