The S-Band SAR images released have been acquired using the satellite’s stripmap mode at 6 metre resolution and are 20km wide by 87km long. They were taken over Sydney Harbour and Cairo and can be viewed and downloaded at the bottom of this page.

Sam Gyimah, the UK’s Science and Education Minister, visited SSTL where he toured the Company’s satellite assembly and operations facilities, and viewed the new images from NovaSAR-1. The Minister said: “Yet again we can see UK research and innovation that is truly out of this world.

This ‘eye in the sky’ can capture an image a dozen times wider than the Strait of Dover and the data it provides can help crack problems from illegal shipping to alerting us to damaging pollution that needs to be countered.

This satellite, backed by a 21 million pounds investment from the UK Government, is a great example of how we are working with the space sector through our modern Industrial Strategy to remain at the forefront of pioneering science and exploration.”

Andrew Cawthorne, Director of Earth Observation at SSTL said “We have worked closely with the SAR experts at Airbus in Portsmouth to develop NovaSAR-1 and the whole team is delighted with these first results – the outcome of space engineering expertise, ingenuity and collaboration. Over the coming weeks our spacecraft operators will continue to test the capabilities of the spacecraft as we task the satellite to image locations around the world, working towards the start of service delivery to our mission partners in the near future.”

A second close up from the original image shows small boats moored in the natural harbour at Church Point, north of Sydney in a demonstration of the usefulness of SAR for detecting vessels of many different sizes and types, particularly at night or through cloud cover.

The image of Cairo shows the River Nile flowing from Upper Egypt through Cairo and down towards Beni Suef. Urbanisation, cultivation along the Nile, and the non-irrigated desert areas are clearly distinguishable. Cropped images taken from the original show The Great Pyramids of Giza, and the Red Pyramid and Bent Pyramid near Dahshur.

Synthetic Aperture Radar is a powerful tool for monitoring the Earth from space due to its ability to see through clouds and image the Earth night and day, and NovaSAR-1 is the world’s first commercial SAR satellite to be operated at a 10:30 equator crossing time, providing time diversity for radar observations by affording increased daylight imaging opportunities in addition to night acquisitions.

NovaSAR-1 was designed and manufactured by SSTL, with an S-Band SAR payload developed by Airbus Defence and Space in Portsmouth and an Automatic Identification Receiver supplied by Honeywell Aerospace.

The SAR payload has a dedicated maritime mode designed with a very wide swath area of 400km to enable the monitoring of the marine environment, and will provide direct radar ship detection information simultaneously with AIS ship tracking data to assist with the identification and tracking of sea-going vessels.

In addition to operating in maritime mode, NovaSAR-1 has been optimised with three additional imaging modes, including a six metre resolution imaging mode, for a range of other applications such as flood monitoring and agricultural and forestry applications.

The satellite has been designed to offer a high throughput of data, observing in a variety of polarisation combinations to add additional information to acquisitions in the form of ‘colour’. 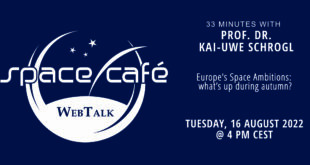