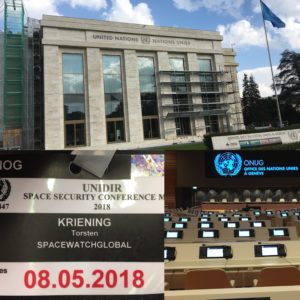 From 7–8 May 2018, Geneva, Switzerland played host to this years’ Space Security Conference. Entitled ‘Space Security: The Next Chapter’, the events explored the existing framework for space governance in the context of a growing and evolving space industry and with an increasing number of private actors moving into the space domain.  Is the current framework sufficient to deal with the new generation of space activities or do changes have to be made? Our very own Torsten Kriening attended the event and caught up with Daniel Porras, Space Security Fellow, United Nations Institute for Disarmament Research and organiser of the event.

The space business has changed rapidly over the last years. What are the threats we are facing?

There are two particular threats that I think really encompass the big dialogues that we are having. The first is space debris. Space debris is not strictly a security problem but is something that puts anyone and everyone that is operating in space, particularly in LEO, at risk.

The other big problem is the weaponisation of outer space. This is distinct from the militarisation of space which implies that the military uses space to be able to facilitate activities here on Earth. By weaponisation, we mean the actual placement of weapons in outer space. It is something that a lot of people are quite concerned about not just because it is a threat to space assets, but also a threat to people on Earth from space. If we start weaponising outer space, we could see counter attacks which could result in the creation of more debris which could result in ruining LEO for everyone.

I think those are the two main problems we are dealing with on a physical level in terms of disruption and chaos in space. There are also other problems, including using wave frequencies to disable other satellites, using lasers to disable them and things that could potentially put satellites and other space assets at risk. But these other forms of counter space technology are not necessarily disrupting to the whole low earth orbit. We need to be considering these issues, but I think the most pressing issue we have relates to activities that create space debris.

What did the conference achieve in terms of finding and addressing threats and solutions?

One of the main things that we try to do with the conference is to bring different actors together to discuss these issues because space is not clear cut in terms of what is military and what is civilian or what is space security and what are peaceful uses of outer space. Things do get intermingled so this time around, we wanted to bring different actors to the discussion that perhaps the Geneva community hasn’t listened to before. We wanted to bring in some commercial players who could show off all of the great things that are being done in space. We also wanted to bring in some folks who could talk about the implications of space and security issues for people here on Earth.

I hope these speakers have helped to connect a lot of folks who weren’t necessarily talking to each other before and potentially bring in new voices into the greater discussion. I think it would be fantastic if private actors go from here to their governments and tell them about what they have heard during the event such as the testing of anti-satellite equipment and how it creates debris and how this is a real problem with serious financial implications. It would be great if they could urge their governments to do something.

Are you happy with the conference outcomes?

Yes. Absolutely. So far the reception has been very positive so I am feeling very encouraged by that and we hope to do the same again next year.

Are you planning to increase public outreach? For me, being here for the first time, it was a bit of a closed shop. Many of your initiatives are unknown to the wider space industry and the public.

I do think that the public at large doesn’t know much about some of these issues, particularly because it’s been a while since we’ve had a space security crisis. We often talk about the 2007 Chinese ASAT test, and there was also a collision between an Iridium satellite and a Russian satellite in 2009. I think that, around those periods, you saw a people get quite interested in space security but it’s been a while since something like that has happened. However, space is gaining a lot of interest and a lot of momentum; so part of what we are doing at UNIDIR is to find new avenues to reach out to the public because we do think there will be more interest. In turn, we also hope that this interest will put some additional pressure on states and delegations to come to the table and try to find some cooperative solutions. As you said, space activities are increasing and if we don’t find ways to respect each other in outer space, eventually it will just evolve into a chaotic mess.

In the conference the PAROS Group of the Conference on Disarmament was mentioned and the upcoming changes there. Can you elaborate on that please?

Geneva is the seat of the Conference on Disarmament and this is a group of close to 70 states that come together to talk about greater disarmament issues.  However, the prevention of an arms race in outer space (PAROS) has been an agenda item for a few decades now. Unfortunately, for the last 20 plus years, the states involved in these negotiations have not been able to come to an agreement on how they’re going to work together, how they are going to take these initiatives forward and so really there hasn’t been much activity here in decades. That said, earlier this year there was an agreement that subsidiary bodies would be formed and that they will be able to address the agenda items separately and hopefully be able to come up with other solutions that aren’t necessarily tied to things like nuclear disbarment or decreasing fissile material. Hopefully they will be able to focus on the space element and find some means of pushing the agenda item forward.

Due to the lack of policy for many areas in outer space, we are facing big challenges with the rise of private business in space (mainly exploration). How can this lack of policy be addressed?

The good thing is that outer space is one of those unique environments where, on the one hand, private actors want less regulation so they can come up with more innovation. But on the other hand, the space community recognises that there are some areas that need some bare minimal traffic laws. A couple of areas that I think will see change within the UN system will be, for example, the new mega constellations where thousands of small satellites will be lofted into space. I think the ITU will have to change the way in which they address orbits and satellite filings. Ordinarily they only provide assignments for GEO, but maybe now we are coming into a period where the ITU needs to look at doing assignments in LEO as well.

In terms of regulation for the Moon and also for asteroid mining, it’s like the Wild West at the moment. How can this be regulated? What needs to happen?

A lot of good thinkers such as space lawyers and engineers and folks in the private sector are already thinking about these things. There is an initiative at the moment in the Hague called the Space Resources Working Group which has met a couple of times already and one of the things they are trying to look at it is how can you coordinate lunar mining expeditions amongst different actors.

I don’t think that there will be an authoritative body at the international level so states will always be the ones who authorise the activities, but perhaps there could be an international mechanism whereby states can at least coordinate if they have a company that wants to mine on the Moon. For example, what if there is another company that also wants to mine in the same place? The laws of physics on the Moon are very different to those on earth and just landing a lunar probe next to another lunar probe could be very damaging because of kicking up dust. Already people are starting to think about these issues and are trying to come up with ways in which they can coordinate.

My hope for something like this is that we do see something like the ITU, which is not an authoritative body, but does provide a coordination mechanism and that in itself, provides a transparency and confidence building measure for states. That’s because they start working together on something they didn’t initially want to work together on, but have been forced, by physics, to coordinate and to build some trust amongst each other. That’s what I see the UN doing. 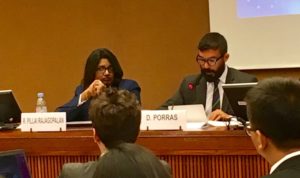 Personal question: What excites you in space?

I think the main thing that makes me a space geek is that I really like to know what’s way “over there”. Ever since I was a kid I tended to ask “what’s way over there?” I was always pulled towards those areas and unfortunately I wasn’t very good at maths so I couldn’t be an astronaut. However, I got quite good with law and policy and space is as far over there as you can get! In space law and policy there’s a lot of room of creativity and it’s exciting and challenging.

What is your vision of space in 20 years?

It will get a lot more crowded…a lot busier. The deep space gateway that has been proposed – sort of a lunar space station – would be interesting maybe in 20 years but I think that’s a little ambitious. I think we will see a lot more robots, a lot more probes going up. But I certainly think humans going into space will increase. This could be in terms of trips to the ISS or just space tourism. But one of the things that I think will be absolutely critical for the future of humankind and what I would like to see, will be more people going into space and having the opportunity to turn around and see the Earth suspended in space. I think if more people have that experience, including myself, I think it will change global attitudes.

If we get more people into space to see the Earth, I think it will. But we are a naturally competitive species and I do think that there will be conflict in space to some degree; whether its cyber or its jamming or some other form, I do think it will happen. However, what we can do is to come to some agreements about how those conflicts might be realised and hopefully the damage mitigated.

SpaceWatch.Global thanks Daniel Porras of United Nations Institute for Disarmament Research for the interview.