For four intensely busy days, the Grand Hyatt Hotel in Dubai was the site of the third High Level Forum (HLF) working to prepare the ground for UNISPACE+50 and the Space2030 Agenda.

Meeting from 6 through 9 November, the HLF brought together representatives of 73 different entities including 42 countries around a programme built on the four pillars of space policy endorsed by last year’s HLF through the Dubai Declaration of 2016:  Space Economy, Space Society, Space Accessibility, and Space Diplomacy.

As sessions focused on these pillars unfolded and questions and statements were considered from the floor sufficient consensus emerged for a formal statement of recommendations and observations to be adopted on the last day. The adopted text includes 19 numbered items, a few of which are particularly worth of mention.

Throughout the Forum, and in the context of all four pillars, speakers argued for a close link to the United Nations Sustainable Development Goals (SDGs). Ultimately, the breadth and depth of this advocacy had a substantial impact on the output document.

With eight direct references to linkage with the SDG’s, two full items devoted to the creation of a Global Space Partnership for the SDG’s, and another item proposing the creation of a Global Space Fund for Development, the theme that Space should be a driver of development was clear. This was not surprising since the Forum tagline for 2017 was “Space as a driver for socio-economic sustainable development.” Nonetheless, given the ability of the space sector to spawn internal disagreements and noting the presence of representatives from sometime adversaries like The Russian Federation, The United States, and China, achieving a consensus on the linkage of the space and development agendas was significant.

Similar consensus emerged over the importance of concluding the work on guidelines supporting the Long-Term Sustainability of Space Activity underway in the United Nations Committee on the Peaceful Uses of Outer Space (COPUOS) and over the importance of increasing the engagement of the commercial space sector with the space policy process and with the Office of Outer Space Affairs (UNOOSA).

This consensus was facilitated by the presentations of two businesses, Sierra Nevada Corporation and Digital Globe (now being rebranded along with Macdonald-Detweiler and Associates, Space Systems Loral and other members of the MDA family as Maxar Technologies.)

Sierra Nevada outlined the process for seeking to participate in the Dream Chaser flights that will take payloads to orbit with the company’s lifting body space craft under an MOU with UNOOSA. The initial expressions of interest closed on November 15 and briefings for those interested in submitting formal proposals will be held in January.

Digital Globe described the impact of Earth imagery on the way we see and respond to key problems facing humanity and moved the audience deeply with its video, “See Freedom.” The video described the company’s support of a team of AP reporters who were developing a story about the enslavement of men in the fishing industry in South East Asia. The story, backed up by remarkable images from the company’s World View 3 satellite ultimately led to the liberation of more than 2000 enslaved fishermen and a Pulitzer Prize for the reporters. 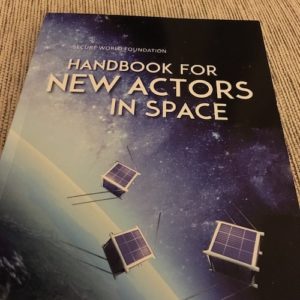 Another widely appreciated action by the non-governmental community was the distribution of over 100 complimentary copies of Secure World Foundation’s recently published Handbook for New Actors in Space.

With these and several other initiatives and interventions in mind, the HLF participants included what may be the most significant recommendation of all in their final report. They recommended that the HLF become a permanent feature of the space policy discussion. Noting in item 17, that “the High Level Forum should be held on an annual basis,” the delegates acknowledged that the less formal structure of the HLF and its success in attracting representation from “a broad community of space actors” gave it a particularly promising role as a generator of ideas and input in support of COPUOS and other state-based processes contributing to the development of space policy.

Putting immediate action behind this recommendation, UNOOSA announced that the 2018 edition of the HLF will be held next November in Bonn, Germany. OOSA also announced an open call for proposals from potential hosts of future HLFs with a goal of selecting venues three years in advance.

With the HLF moving to Europe in 2018, it is useful to note the extraordinary importance of the UAE , its space agency and the Mohamed bin Rashid Space Center in launching what promises to be an important initiative in broadening input into the process of designing space policy in the 21st Century.

From the very first one-day event that inaugurated the HLF space policy process in 2015 through two superbly hosted multi-day events in Dubai in 2016 and 2017, the UAE has asserted and earned an important leadership role in the multilateral diplomacy of space. From the statements of its national and space sector leadership to the opportunity to see first-hand the impact of the country’s investment in space infrastructure and human capacity, the UAE has earned respect and inclusion not only in the community of states but in the broader community of space professionals.

What remains to be seen is how it will respond to the growing hope among the newest actors in space that it will mentor, support, and advocate for them. With an ambitious space agenda of its own so often mentioned in the speeches of its leaders, the UAE will be tempted to focus fully on its own objectives going forward.

It will also face an opportunity to assist and advise the many countries and peoples looking to it for guidance and support as they build their own pathways to space and its applications. Through that opportunity, the UAE stands to assume an important role in the space sector and its growing aspiration to be an engine of socio-economic development.

The full text of the recommendations and observations of the 2017 HLF is available through the UNOOSA website at the following address: http://www.unoosa.org/documents/pdf/hlf/HLF2017/HLF_recommendations.pdf

SpaceWatch Middle East thanks Dr. Simpson for sharing his views.