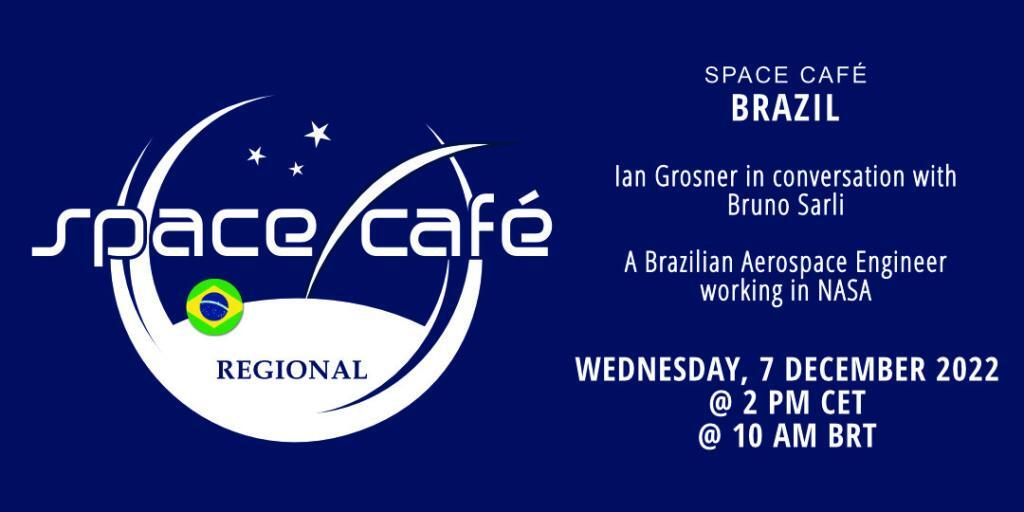 This Space Café Brazil will feature Bruno Sarli a Brazilian Aerospace Engineer, in conversation with Ian Grosner, Correspondent of SpaceWatch.Global for Brazil.

Bruno Sarli is a PhD Aerospace Engineer with 13 years of experience, most recently focused on space flight dynamics for the past seven years. After graduating in Aeronautics in Brazil and Space Engineering in Europe, he moved to Japan where he obtained a PhD in Engineering while working for ISAS/JAXA as a researcher. In 2016, Bruno joined NASA Goddard Space Flight Center where he focused on mission design and planetary defense. Bruno worked in mission design and system analysis for four Japanese missions, NASA DART and MAVEN missions, and the Mars Sample Return (MSR) Campaign.

Bruno is currently a phase lead in the Capture, Containment and Return System (CCRS) for NASA Mars Sample Return.

The conversation will include careers in the space sector, in Brazil and internationally, space missions, planetary defense and other topics.

The audience will have an opportunity to ask questions in dialogue with Bruno Sarli.

This Space Café Brazil will be conducted in Portuguese and will take place on Wednesday, December 7 at 10 am (BRT) / 2 pm (CET).

Share
Previous #SpaceWatchGL Opinion: Cybersecurity and climate change: a common cause for the space industry
Next NASA and Japan further Gateway contributions Space