Space Café WebTalk with Dr Gaetan Petit: Can space do more for Earth? 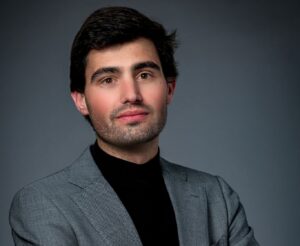 A new-starter in the space game and with an education in neuroscience, Gaetan completed his undergraduate and masters degrees at EPFL Lausanne, and a doctorate at ETH Zurich, before taking on a traineeship at the European Space Agency. From there, he worked for the Swiss Space Center, as a scientific advisor and tech transfer officer.

Last year in the midst of the pandemic he launched Space4Impact, an organisation that – guided by the United Nations’ Sustainable Development Goals – works to maximise the positive impact of space technologies on Earth by linking new space companies to non-space markets.

During this week’s episode, he and Torsten discuss his non-typical career trajectory and what Space4Impact is doing to broaden public understanding of the importance of the space sector.

From sleep disorders to space

Before casting his eyes on the sky, Gaetan’s career and studies were focused on neuroscience – specifically, sleep disorders – which he researched for his doctorate and while a visiting student at Harvard Medical School.

Throughout his medical studies, he maintained an interest in the outdoor sciences and space, with opportunities to move into the sector cropping up every few years. Eventually, while completing his PhD placement at the Children’s Hospital in Zurich, he began a traineeship at ESA that combined his two interests – a research project that focused on sleep in space.

“I went to the European Space Agency Technical Center in the Netherlands where I could work at this advanced concept team, which is a bit like a scientist think tank for ESA”.

‘Instead of working on patients at the hospital, I could work on the astronauts’ sleep quality and that was it – I was into the space field.”

Can space do more for us?

When you visit Space4Impact’s website, the first thing you read is: ‘We believe space can do more for Earth’.

Too often when people think of space they think of an industry unto itself – a place that exists only to conjure the imagination or, more recently, as the destination for billionaires’ vanity trips.

But the reality is, humankind’s forays into space have always been about Earth and improving terrestrial technology – but Space4Impact thinks the sector can do better to promote this among the general public.

“When you tell people you work in space tech, they always think of rockets, moon rays, of going further exploring the solar system – they never think about what you actually do on Earth with it.”

“There has been all this innovation that has been transferred to other industries, in the last 50 years or so, that no one ever mentions”.

“All these satellites, all this data, GNSS systems like the GPS. For example, people use GPS everyday in the car or on the phone, but they never think of space tech for that. And, that’s why we created Space4Impact.”

Last year, in lieu of physical conferences, the start-up began an online platform for startups to explain their work, as well as how it benefits Earth and aligns with the United Nations’ Sustainable Development Goals.

While Gaetan believes that there’s no industry that couldn’t benefit from space technology, there are several that benefit most when it comes to sustainability – such as agriculture, disaster management, insurance and reinsurance – which rely on satellite imaging, as well as global logistics and supply chains which requires telecommunications and GPS – all technologies that would not exist without a space presence.

Space4Impact is currently also focused on another area which has resulted from an increase in pressure on banks and private equity firms to report on their footprint, otherwise known as environmental, social and governmental reporting.

“We believe that space tech is one of the only objective ways to measure this impact and footprint because of the orbiting satellites, you have the same measure all around the globe.”

“There is really no way of cheating – it’s the only way to have real transparency on this reporting. So we really think that we want to push a bit into this direction to raise awareness about these applications as well.”

To listen to Dr Gaetan Petit’s insights into space and promoting the industry, you can watch the full program here: