Satellites orbiting the Earth provide many tangible benefits to billions of people around the world on a daily basis. However, space is becoming increasingly congested and the continuity of these benefits cannot be taken for granted. For more than a decade, Secure World Foundation (SWF) has focused its efforts promoting the sustainable use of outer space. While many in the space community are becoming more aware of challenges to sustainability, this notion must become more widely known and considered if humanity is to continue benefiting from space activities for years to come. SWF has produced this infographic, in partnership with Visual Capitalist, to help illustrate why space sustainability is important to our current way of life. 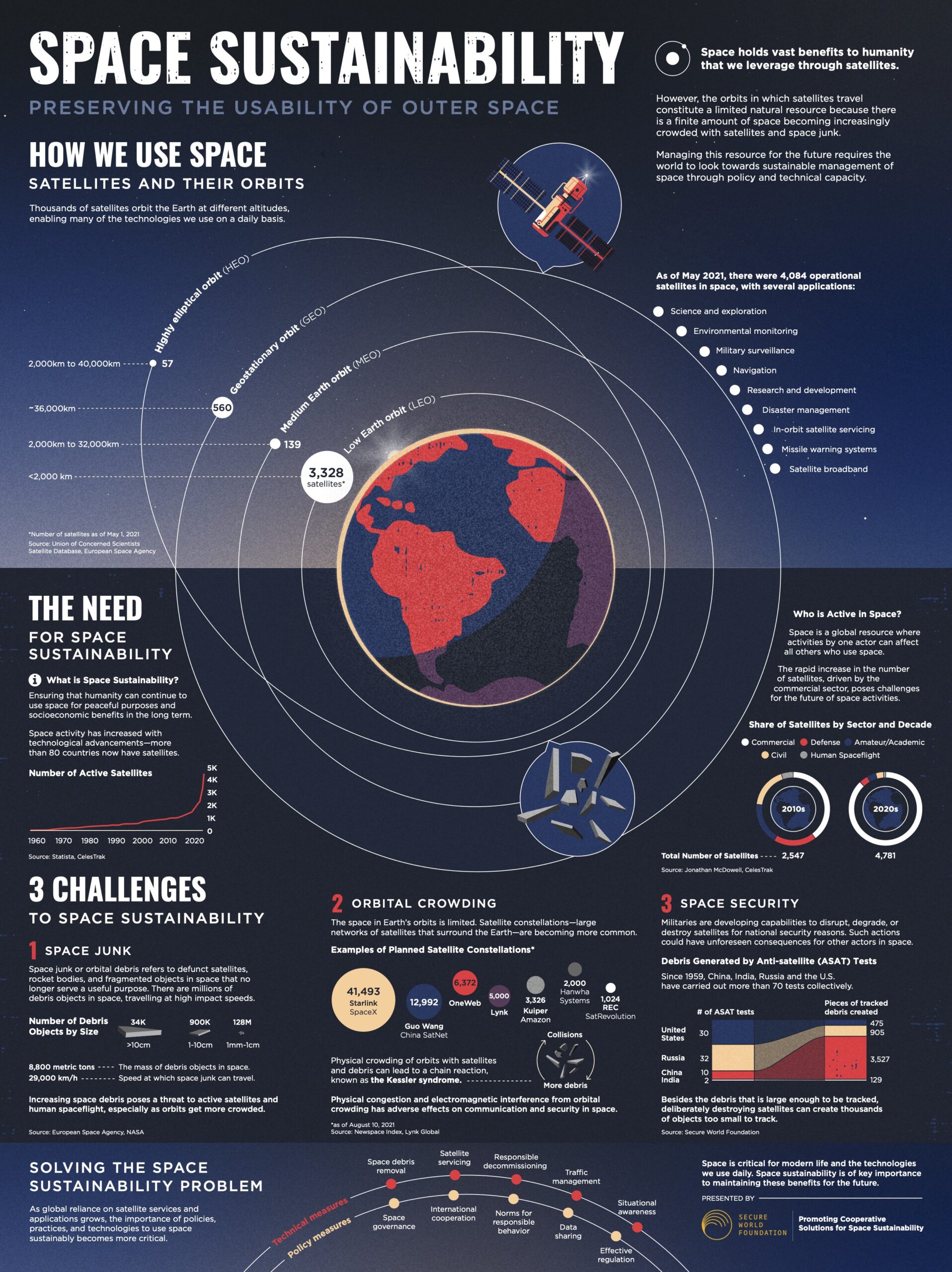 Why do we care about space? How do we use it?

Space activities provide critical services, including weather and environmental monitoring, navigation, and even early warning missile detection. The range of activities and actors is growing as space technology develops and proliferates. These activities are largely confined to two orbital regions that offer key physical characteristics: low Earth orbit (LEO), which ranges from roughly 160 km up to 2,000 km, and the Geosynchronous orbit (GEO), which is at an altitude of 36,000 km above the equator. As most satellites operate in these two orbital regions, there are growing concerns over congestion and potential collisions. This is becoming increasingly apparent as the rate of new objects being introduced, particularly in LEO, is rising rapidly.

The challenges to space sustainability

The rate of growth described above is not sustainable under current governance. Three challenges.

The first is space debris, or all of the defunct satellites, rocket bodies, and fragmented objects in space that no longer serve a useful purpose. There are millions of pieces of debris, and they are moving at speeds of up to 29,000 km/h as they orbit the Earth. Collisions with debris as small as a screw can debilitate a satellite. Moreover, every collision creates more debris, which can then in turn lead to more collisions, creating cascading effects that could endanger satellites for decades to come.

The second challenge is crowding. Much of this is due to the explosion of commercial space activity. Today, commercial satellites vastly outnumber government or military satellites, which is a significant change from past decades. Recent years have seen numerous announcements by companies intending to launch LEO satellite constellations that number in the thousands. This will greatly increase congestion in space and the associated risk of collisions of satellites with each other or with debris. Moreover, there are no existing rules or guidelines for traffic in LEO, creating conditions not unlike cars driving in a large parking lot with no rules on where they can go.

The third challenge is that of space security. Militaries around the world rely increasingly on satellites for reconnaissance, communications and even command and control for nuclear weapons. As such, several countries have launched efforts to develop counterspace capabilities in order to deny, degrade or destroy the space capabilities of an adversary. Some of these capabilities physically destroy satellites, which can create large amounts of long-lived debris. Even the mere testing of such anti-satellite weapons accounts for some of the single largest debris-creating events in the history of human space activities. The consequences of widespread anti-satellite weapons testing could be catastrophic, particularly for LEO or GEO.

As we come to grips with the challenges to space sustainability, the international community will have to find both technical and policy solutions to sustainability. Technical solutions will include things like active debris removal, traffic management/coordination, and greater space situational awareness collection. Policy solutions will include options such as international cooperation, norms of responsible behavior, and greater data sharing. Together, these pieces can help ensure the long-term sustainability of space activities for generations to come.