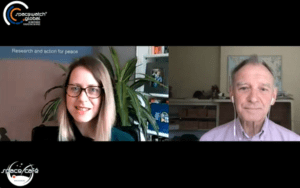 Her first guest was Dr. David Kendall. Dr. Kendall is a remarkable leader in the space community both here in Canada and internationally. He culminated a long career at the Canadian Space Agency as its Director-General. He represented Canada at the United Nations, specifically at the Committee for the Peaceful Uses of Outer Space as a delegate, then Head of Delegation, and between 2016 and 2018 as Chair of the Committee. Recently he is a founding member of the Outer Space Institute at the University of British Columbia. And throughout he has been an active member of the International Space University, having just been awarded the position of Faculty Emeritus following more than thirty years of service.

Canada has a long history as a spacefaring nation, but whether it will lead to a new era of space activity is not clear. Together, Jessica and David explore the question of whether space needs more Canada.

Canada was the third country to build and operate a satellite in space – the Alouette I space weather satellite. Since then, Canada has consistently “punched above its weight” in space. Canada is known globally for its work on space robotics, it’s astronaut program, remote sensing, and studies of space weather. These achievements are embedded in Canada’s national identity – the Canadarm2 even appears on a banknote. And as a founding member of the UN Committee on the Peaceful Uses of Outer Space, our role in outer space has also been marked by robust diplomacy.

So where to next? Canada has committed to the next big thrust of space exploration activity through participation in the Artemis Program and as a signatory to the Artemis Accords. But David argues that Canada’s space program has lost momentum over the last decade. From science to technical innovation and investment in domestic industry, it’s not clear that the country is positioning itself to maintain leadership in this critical domain of human activity.

UN COPUOS has been a significant focus of Canada’s leadership efforts in space since its inception in 1959, which continues today through a commitment to supporting the continued focus on long-term sustainability in space. With 95 member states and growing, COPUOS is an impressive body for space diplomacy. Under David’s chairmanship, it adopted 21 guidelines for the long-term sustainability of space activities. But change is needed to keep up with the changing pace of space activity, in particular the rapid evolution of the commercial sector. In its current format, COPUOS is too slow, too siloed, and missing this critical commercial voice.

Similar challenges beset Canada in space. Canada has a National Space Strategy, or at least part of one. The main thrust of this document is a major commitment to space exploration: $2.6-billion over the next 20 years to support participation in lunar exploration and a robotic lunar gateway. But David argues that many other critical areas of space in Canada are not addressed. What about remote sensing, remote medicine, agriculture, communications, national security and sovereignty? There is no plan and no budget for these activities. And there is no national regulatory framework. When it comes to space strategy, “Canada is halfway there…..We have a strategy, but we don’t have a plan as to how to move forward. And that is really holding back the Canadian program right now.”

There is a model that Canada can and should adopt to give space a proper place within Canadian policy, and that model is the United States’ National Space Council, which brings together all of the government departments that are required to think about space policy and activities.

“Canada really does need to develop an overarching high-level body that reports to the highest level of the government, which in our case will be the Cabinet.”

Next stop the Moon?

Lunar exploration is a significant focus of Canada’s space activity going forward, and the Artemis program and Accords are at the heart of this. The Canadian Space Agency is one of 9 signatories to this set of principles for the peaceful exploration of the Moon. David argues that this is a positive process: “somebody has to take a lead somewhere, somebody has to put something down and say these are the best practices that we think are necessary in order to move forward beyond low Earth orbit, especially with humans.” But it is essential that Canada clarify its position on key issues such as space resource extraction. “We don’t have a policy on that, and we don’t have a debate on that….Canada needs to have a high-level forum that is looking at this and we absolutely need to move forward rapidly with the whole question of a modern regulatory framework.”

“Canada could and should pursue a leadership role in the multilateral diplomacy related especially to resource exploration, exploitation, and utilization.” But this first requires clear domestic policy and priorities. David argues that this lack of clear policy position also hinders leadership on many other issues at COPUOS related to space sustainability and safety.

In many ways, the current initiative by the United Kingdom within the UN General Assembly First Committee draws on the process of developing norms and best practices within COPUOS. Asked about this by an audience member, David gives kudos to the UK for pursuing this, and emphasizes the opportunity for the current U.S. administration to likewise exercise leadership, because progress “has to come from political leaders….They have to want this to happen. And until we get this, this whole set of issues about security will continue to not be terribly effective.” It’s time to start the discussion and see if the leaders will take notice and step up to move it forward.

Space is critical, so what are we doing about it?

A key theme of the conversation is that space is critical. In Canada, when we’re talking about space, we are also talking about the Arctic, the environment, national security, fishing, forestry, health and education, electricity. Space is a critical infrastructure; it’s vital. But it’s not treated as such within government.  As David notes,

“We know if we lost space assets….communications, GNSS systems, and remote sensing systems, we will be a lot of trouble…. What are we doing about it?”

To listen to this Space Café insight into the space industry, you can watch the full program here:

Space Cafe is broadcast live. To subscribe and get the latest on the space industry from world-leading experts visit – click here.