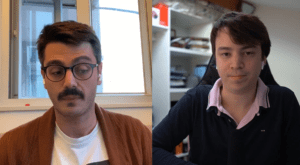 As part of the partnership between SpaceWatch.Global and Orbital Gateway Consulting we have been granted permission to publish selected articles and texts. We are pleased to present “Dongfang China Aerospace News Roundup 22 Nov – 29 Nov 2020”.

Hello and welcome to another episode of the Dongfang Hour China Aero/Space News Roundup! A special shout-out to our friends at GoTaikonauts!, and at SpaceWatch.Global, both excellent sources of space industry news. In particular, we suggest checking out GoTaikonauts! long-form China reporting, as well as the Space Cafe series from SpaceWatch.Global. Without further ado, the news update from the week of 23-29 November.

On Tuesday morning (24/11 CN time) saw the launch of Chang’e-5 take place from Wenchang Launch Center in Hainan. The launch was a success, and represents China’s first lunar sample-return mission. It is also the first sample-return mission since the Soviet Luna 24 mission in 1976. During the launch, we saw large crowds of space fans on the beach in Hainan watching from a distance, with a stunning photo below capturing the action.

After a number of maneuvers in its Earth-Moon trajectory, the spacecraft successfully braked and entered lunar orbit. Other maneuvers are planned to adjust the trajectory to the ideal lunar orbit for landing in the planned land site (Mons Rümker in the Ocean of Storms).

A quick overview on what will happen next:

With 2kg of lunar samples (initial weight of spacecraft: 8,2 tons!).

It is also worth noting that the Chang’e 5 mission is not just a “revisit” of a previous lunar mission. It is significantly more sophisticated:

An article by Satellite World revealed that China Satcom would be replacing a number of older radio and television satellites between 2021 and 2023. All satellites would be purchased from CAST, and based on the DFH-4E satellite platform (enhanced version of the DFH-4 GEO platform). The satellites will be put into orbit by the LM-3B, China’s current workhorse for geostationary orbit. The transaction was said to reach 3,918 billion RMB (approx 600 million USD).

In addition, the article announced the Chinasat 26 (broadband comms, Ka band) satellite, which will be a welcome addition to the currently operational Chinasat-16, the Shijian-20, and the future Chinasat-19.

It will be interesting to watch the impact of the increase in Ku and Ka-band capacity in the coming years over China and the Asia-Pacific region, with ChinaSat having noted in other presentations plans to have ~500 Gbps of capacity by 2023. . It is also noteworthy that none of these satellites are specified as being the Dongfanghong-5 (DFH-5) bus–the first 4 are specifically DFH-4E, and ChinaSat-19 is not specified. CAST has been developing the DFH-5 as its next-generation satellite bus for some time, with the Shijian-18 satellite–launched/failed in 2017–being the first and to date only DFH-5 to reach the launch pad. Recently-ordered Apstar-6E for APT Satellite, a CASC subsidiary, was noteworthily also using the DFH-4E.

According to Reuters, the Trump administration is preparing to blacklist 89 Chinese companies, including a large number of major Chinese aviation companies such as COMAC (building the C919) and the aerospace conglomerate AVIC. U.S. suppliers will” need special licenses to sell a broad set of commercially available items to such companies” according to the piece by Reuters.

Are we heading towards a “post-Cox Report” situation for aviation as well?

If this blacklist is made official and effective before the Biden administration take-over, this could lead to a total disruption of the civil aviation industry in China. The blacklist bears a strong resemblance to the restrictions US space companies faced when selling to China, after the Cox Report in 1998. The consequences on both sides would be more massive for aviation:

Could decoupling happen in aviation? A different industry from space, as it is a much more international and interlinked industry. We also note that AVIC has a number of US subsidiaries or JVs, almost all in non-sensitive industries such as the manufacturing of very small aircraft (Cirrus Aircraft). Map below from linked Bloomberg article on AVIC’s US business interests.

Discussions on social media: a ploy to pressure the CAAC to re-authorize the 737MAX (FAA cleared the 737 Max to return to flight earlier this month) 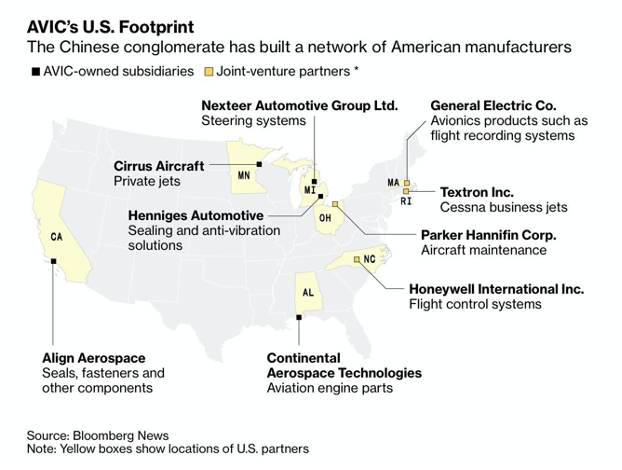 CASIC/Expace released a couple of photos of its Mingfeng liquid methalox engine earlier this week. The engine completed a systems-level hot test, with the test verifying the integrity of the engine system, thrust chamber, combustor, turbo pump, valve, and final assembly. A post from China space industry watcher Andrew Jones mentioned around 10 tons of thrust, however we were not able to independently verify this figure.

Expace is more famous up to this point for having developed the KZ-1A fast-response solid rocket. With the KZ-1A, Expace has built a pretty reliable, fast-response rocket that can be deployed using a transporter erector launcher (TEL). As far as we know, most of Expace’s near-medium-term rocket plans still involve solid engines–indeed, KZ-1A and KZ-11 will both likely continue to use solid fuel. It’s interesting therefore that Expace is developing this engine, as it may indicate that they have plans to sell to other rocket companies, which would imply CASC/CALT/SAST.

The World 5G Convention opened in Guangzhou last week. During the Convention, the Chief Designer of BeiDou 3rd Generation, Yang Changfeng, noted that all core components of BeiDou-3 were being manufactured domestically. Yang also noted that around 80% of phones in China are now equipped with BeiDou-3 chip sets. Yang linked BeiDou-3 with 5G by noting that many elements of 5G will rely on highly precise location data.

Separately, an excellent source on 5G information that I recently-ish discovered is AnalysisBranch, a sort of 5G blog written by Dave Burnstein. Highly recommend reading “5G: THe Facts and the Future”, his free analysis, wherein he mentions correctly that China is by far the world leader in 5G in terms of level of network development and number of subscribers/number of 5G phones sold, but that thus far, there remain no killer apps anyway.

High-level article below on BeiDou

Share
Previous SpaceX to fly Starship 50,000 feet high, with 1/3 chance to get it back intact
Next NewRocket proposes power gel-fueled “green” rocket