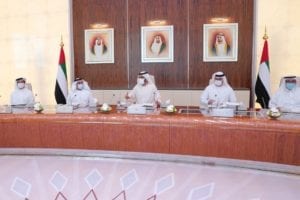 His Highness Sheikh Mohammed bin Rashid Al Maktoum, Vice President, Prime Minister and Ruler of Dubai, chaired the first physical meeting of the new cabinet at the Presidential Place in Abu Dhabi, after a series of remote meetings. At the beginning of the meeting, His Highness Sheikh Mohammed bin Rashid hailed UAE’s success in operating the first peaceful nuclear reactor in the Arab world, and the successful launch of Hope Probe.

During the meeting, His Highness Sheikh Mohammed bin Rashid announced that UAE Cabinet meetings will continue from August rather than from September as it used to due to the current circumstances. Stressing the importance of the economy, His Highness Sheikh Mohammed added, “We approved 33 initiatives presented to us by the new Economy Minister and established a committee to follow up on implementation. We restructured a number of councils and issued new appointments.”

The Cabinet has mandated Dr. Thani bin Ahmed Al Zeyoud, Minister of State for Foreign Trade, for retaining and attracting talent, and Dr. Ahmed bin Abdullah Belhoul Al Falasi, Minister of State for Entrepreneurship and Small and Medium Enterprises, with the role of boosting the tourism industry in the country. On another level, the Cabinet approved a policy on Freezing Red Blood Cells for emergency purposes. The policy organises the process of red blood cell (RBC) freezing as it adopts the most advanced approach to freeze-preservation of red blood cells.