A private rocket from a Japanese firm, Interstellar Technologies, failed to launch on Sunday.  At 5:15 a.m. on Sunday in the town of Taiki-cho, Hokkaido, the Interstellar rocket, “Momo-F5”, experienced an anomaly approximately 68-70 seconds after launch.

The “Momo-F5” rocket’s engine nozzle broke, causing the rocket to lose balance. In an abort procedure, the Interstellar team manually shutoff the engine and safely dropped to the surface of the water within the warning zone.  The rocket, which stands at 10 meters tall and weighs one metric ton, fell into the sea about 4 kilometers off the coast after reaching an altitude of 11.5 kilometers.

This was the fifth launch of the “Momo-F5” rocket. The third rocket launched in May last year was the only one that reached the target altitude of 100 kilometers. As recent as January 2020, Interstellar postponed the “Momo-F5” launch because of issues with their communication equipment, which they resolved.

According to the Interstellar Technologies website, significant results were obtained from this launch, which is a great step forward for future rocket development. The Interstellar team, led by company president, Inagawa Takahiro, is deeply grateful to everyone who cooperated in this launch, and they will continue to work hard to establish rocket development and launch services.  This includes the ongoing construction of the “Momo” rocket as well as development of their satellite orbit launch rocket, “Zero”.

The “Momo-F5” sounding rocket is a crowdfunded effort that raised $391,000 (42 million yen) for the Momo-F5 launch. On the Campfire website, Interstellar thanked backers for their support.

The announcement was made 14 June 2020 by Interstellar Technologies. 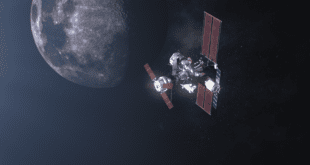 President Biden welcomes Japanese astronaut aboard Gateway and the Moon