Yesterday morning I woke up to the news that Elon Musk had urged the California economy to be opened up, labelling the current lock-down as no less than ‘Fascist’. Initially I shrugged this off as yet another example of polarized US politics and I went on to start my day’s work with social distancing as normal. However, that one word kept lingering in my mind, and it didn’t sit well.

For Dutch people like myself, ‘fascist’ is immediately associated with the second world war. I’m son to a father who during the war decided it would be good fun to take his bicycle through a field with molehills, slaloming through them as fast as possible. It wasn’t until later that day he found out that to block the allied forces, the German army had only hours before created long stretches of minefields. He had just gone through one of them while shortcutting his way home from school! What if the ‘more fun’ option had been to hit as many molehills as possible? That split-second decision to slalom rather than its deadly alternative, is the difference between you reading this post and it never been written at all.

While Elon’s remark certainly triggered that piece of my family’s history, it didn’t explain why my mind kept bringing me back to that one word. Did it have something to do with wanting to keep politics out of satellite, the industry that has shaped my career? That is a hard argument to make as this industry was virtually created by politicians and still today is one of the most heavily regulated industries around. It wasn’t about triggering any cultural sentiments or feelings of being disrespected either; I’m not of Jewish or any other descent that’s been targeted by any fascists ever. Since I could not shake it off, I decided to read up on what he actually had said, in the hopes that more information and context would set my mind at ease. Bad idea!

I care about Elon Musk. He is one of my heroes. He’s the one who came into our industry and made it better by challenging the status quo – launching rockets and bringing them back to earth for re-use like in one of the best episodes of The Jetsons? I mean… that’s epic! So reading the articles on the topic and also his tweets, e.g. March 19: “Based on current trends, probably close to zero new [Covid-19] cases in US too by end of April” and what he said during the latest earnings call, April 29: “This is not freedom – give people back their goddamn freedom” just made me more confused and my hopes to ease my mind by getting more context, actually had the opposite effect. His comments now took complete center stage and I decided to take pen to paper to cleanse the mind.

People are entitled to their opinions and if anyone has made positive impact by holding on to his, then Elon Musk is certainly one of those. But how can someone who’s opinion I’m inclined to never doubt, have written late March that he believes Covid-19 would spread no further? I mean, seriously? And on condemning the lockdown, or ‘forcibly imprisoning people in their homes’ as he put it, it’s no secret that, despite the announcement of record sales of Tesla with shares up 4% in after-hours alone, Elon is very concerned about workers not being able to return to work at his Tesla production line.

Is it all about the quarterly results after all? Is my hero whose visions were greater than life itself, ultimately only concerned about the bottom line? Is his grand vision to use Starlink as a platform to go to Mars ultimately not about the mission but about the money? For the time being I refuse to believe that. Elon sat on stage during Satellite 2020 in Washington DC and we all saw a very soft-spoken, down to earth and articulate industry leader with a clear vision for the future. I did not see a money driven wall street type, far from it. Right?

So now what? After this mental journey, where do I leave things now? It’s about having to accept that those that are the leaders of our industry and are of exceptional quality with fascinating track-records, are at the end of the day human-beings. And like many other human beings they say things and have opinions that aren’t mine. They use big words in public that I wouldn’t even consider using in private settings, loaded as they are. I’m grateful Elon said what he said. It allows me to see him for what he is: a great industry leader, but also a human being with human flaws, potentially serious, and therefore never to be idolized. 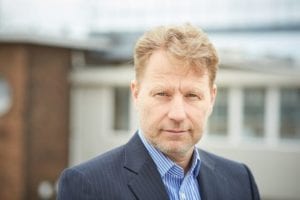