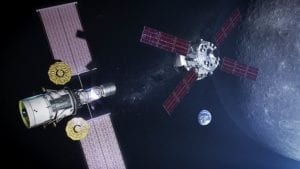 The rapidly growing new space startup Rhea Space Activity (RSA), headquartered in Washington DC and with operations in Colorado Springs, has been tapped by the United States Air Force (USAF) to develop a wholly new field of intelligence to surveil “cislunar” space – that is, the volume of space between the Earth and the Moon. This mark’s RSA’s first prime contract win within the U.S. defense establishment.

Funded by the U.S. Air Force, the RSA-led project will develop a LUNINT dashboard, centered on a graphically enhanced three-dimensional situational awareness portal that will derive precise coordinates of notable objects in lunar space and on the lunar surface. In addition to the dashboard, the LUNINT program will suggest an optimum satellite constellation architecture to monitor cislunar spacecraft in support of U.S. space domain awareness objectives.

Shawn Usman, an astrophysicist and founder of RSA, said a well-established LUNINT capability is required to ensure sustained USAF cislunar Space Operations for the 2020s and well beyond.

“The LUNINT program represents a new dialogue between the New Space industry and the national security community,” Usman said. “Cooperation between energetic scientists and engineers in the New Space industry with innovators in the U.S. intelligence community will enable us to develop a new, hyper-focused discipline of intelligence collection to support the U.S. military as they expand their operations into cislunar space.”

Saber Astronautics, operating facilities in Colorado and Australia, will be integrating RSA’s LUNINT software solution into its mission control software suites. This integration will make lunar intelligence available to the U.S. military through the acclaimed Space Cockpit project and in commercial channels through the Predictive Ground station Interface (a.k.a., “PIGI”) software. Space Cockpit and PIGI are mission control software suites that enables operators across U.S. services and allied partners to visualize the local space environment, make rapid decisions, and manage large number of space objects

“We are seeing increased governmental and military demand for the unique capabilities offered by new commercial companies that have the Moon in their sights, said Saber Astronautics’ CEO Dr. Jason Held, “RSA’s LUNINT work is perfectly timed, and we can’t wait to try it out with our U.S. government customers and Five Eyes mission partners.”

The Five Eyes is an intelligence-sharing alliance comprised of Australia, Canada, New Zealand, the United Kingdom, and the United States.

Cameo Lance, a physicist at RSA, said that development of a new lunar intelligence discipline was inevitable as the U.S. military continuously seeks to expand its capabilities beyond geosynchronous orbit. “We’ve recently seen a significant uptick of spacecraft headed to cislunar space by our near-peer competitors,” Lance explained. “For example, China’s Chang’e 4 mission successfully landed a probe on the far side of the Moon, and China currently uses a communications satellite at the Earth-Moon L2 point to relay communications to Earth.”

RSA and Saber plan to apply for a Phase 2 contract to bring operational LUNINT capabilities to USAF personnel. The two companies also plan to develop doctrinal recommendations on how such a new capability will fit into current U.S. intelligence practices, and the broader Five Eyes intelligence alliance.