How is Europe positioned in the field of “space surveillance & tracking” ?

The profound transformation of the space sector is raising new safety and security concerns for space infrastructures. This situation has been widely acknowledged by governmental and commercial stakeholders, including European ones. Currently, there is a growing and widespread need for actionable SSA data and operational SSA services. Space surveillance and tracking (SST) capabilities, a crucial part of the space situational awareness (SSA) conundrum, are one of the tools to address these growing concerns.

We sat down with ESPI Resident Fellow Tomas Hrozensky to discuss current European SST capabilities. The interview follows up on the European SST landscape: Current status and challenges on the way ahead research paper by ESPI researchers Tomas Hrozensky and Marek Dvoracek, which is included in the Special Issue of the Journal of Space Safety Engineering on space situational awareness and space traffic management (Volume 6, Issue 2, June 2019).

What did your research lead to? Is Europe progressing in SSA? If so, what are the key takeaways you might share?

Europe is clearly increasingly engaged in space security. This includes SST capabilities, which is of paramount relevance when discussing the broader concept of space situational awareness.

We found out that European SST capabilities still display performance limitations e.g. in comparison with the USA, which is dominating the SSA field internationally. Simultaneously, on the other hand, development and enhancement of European SST capabilities are progressing and warm political climate towards further European engagement in space security topics should provide fertile ground for continuation of this trend.

Particularities of the European space landscape lead to existence of multiple parallel channels, through which SST-related activities are being pursued in Europe, which allows European countries to capitalize on pooling and sharing efforts among the willing, but could also raise questions with respect to complementarity and duplicity of efforts.

Through which channel is the European approach primarily developed?

Mostly national. European states are the owners and operators of the main SST systems in Europe. In most cases, the military plays a predominant role in SST/SSA activities, highlighting the strategic stakes of the issue.

France, Germany, Italy, Spain, and the UK, have in 2014 also formed the EU SST Consortium, to pool resources within a broader EU framework. This is but one example of ongoing and deepening collaborative efforts in Europe. The next significant one would be the ESA framework. Within the work programme of the Agency, the SSA programme has been running for a decade already.

Currently, more and more European countries are demonstrating an interest in SST/SSA activities. Poland, Romania and Portugal represent the three new member states of the EU SST Consortium. Other European countries such as Belgium, Denmark, the Netherlands and Norway and have e.g. signed bilateral SSA sharing agreements with the USSTRATCOM (like France, the UK, Spain, Germany, Italy, Poland ESA and EUMETSAT had done). As a consequence, a vast majority of European SST capabilities are concentrated in a handful of countries, yet the interest in this domain is spread, and growing, across most European countries.

You mentioned collaborative efforts at a European level. In such context, what would be the merit of a broader involvement of European institutions?

It is actually the DNA of Europe in space, to pool and share resources of multiple smaller states, but there is more at stake than that.

There is a need for an effective coordination of efforts. Two independent platforms for European engagement in the SST have been formed – within the European Union (EU) and European Space Agency (ESA) frameworks.

The reinforcement of European coordination and the confidence-building among partners is the key benefit brought by the functioning of the Consortium. On the other hand, official reports acknowledge that the ultimate European performance in the field of SST might be limited by the current complex organisation.

That would be SST engagement within the European Union platforms, what about the second collaborative framework, the European Space Agency?

ESA is a key actor for R&D and technical expertise, but also is a major user as we have seen just recently with the Aeolus – Starlink collision avoidance case. The Agency has developed its SSA programme around three major areas – space surveillance & tracking (SST). Space weather (SWE) and near-Earth objects (NEOs). € 200 Million was budgeted for the period 2009–2020.

However, the reluctance of ESA member states to cope with security and military concerns associated with SST capabilities resulted in limited ESA engagement in the SST segment, paving the way for the creation of the EU SST Support Framework.

Within the SST segment of ESA’s SSA Programme, ESA is primarily involved with R&D, focusing on both hardware (radar, optical or laser-ranging sensors) and software (data processing activities).

In a forward-looking perspective, the upcoming ESA Ministerial Council Meeting in November 2019 shall decide future ESA’s engagement in SST/SSA. The Agency expressed its interest to remain active in space security topics. This interest, in any case, will be subject to approval by Agency’s member states.

Global trends display emerging business opportunities in SSA. How is private sector in Europe positioned on this market?

Commercial perspectives have not yet been significantly influential in shaping of the overall European SST landscape. The development of commercial solutions is not actively supported in Europe with comparison to the USA, where some leaders in the provision of SST data or services are already emerging.

So far, the business of private European companies in the SST supply chain consisted primarily of industrial contractorships in the framework of public-led programmes. Supporting the emergence of European private providers and, maybe more importantly, leveraging commercial data and services will certainly be a major step having strong political implications.

In the end, what would be your overall assessment of European SST capabilities?

I would frame it “tangible progress but serious challenges on the way ahead”.

As I mentioned, European SST capabilities are firstly a sum of nationally owned / operated assets accompanied by complementary collaborative frameworks consisting of several motivated member states. More European countries are starting to engage in SST, and the EU is stepping forward in addressing SST/SSA in its scope of responsibilities. At the same time, the overall architecture and performance with respect to the global landscape and anticipated developments call for significant enhancements.

In this sense, our research led us to identify several outstanding issues concerning organisational aspects, funding, autonomy, complementarity or data sharing policies, which will have to be tackled by European stakeholders in the near future on the way towards making Europe a more significant actor in the SST field. 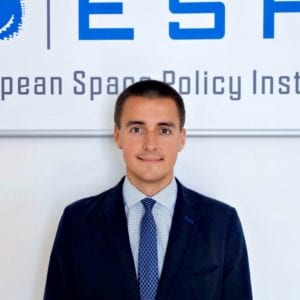 Bio: Tomas Hrozensky joined ESPI as a Resident Research Fellow in July 2018. He holds MA and PhD in international relations from the Matej Bel University in Banska Bystrica, Slovakia. Previously, during three years as a full-time doctoral candidate he was also  a visiting Fulbright Scholar at the Space Policy Institute of the George Washington University in Washington , researcher for the Space Security Index 2017 project and regular participant to the UN COPUOS meetings within the Slovak delegation. During his university studies he also completed several internships in the state administration and international organisations. Tomas has several years of volunteer engagement experience in the Space Generation Advisory Council and in his home country he currently chairs the Slovak Space Policy Association NGO, which also serves as a national point of contact for Slovakia in the European Centre for Space Law. He can be reached at: [email protected]

SpaceWatch.Global thanks Tomas Hrozensky of European Space Policy Institute for the interview.