#SpaceWatchGL Op’ed: How India is catching up with China with the launch of Chandrayaan-2

As part of the partnership between SpaceWatch.Global and Dr. Rajeswari Pillai Rajagopalan, we have been granted permission to publish selected articles and texts. This is “How India is catching up with China with the launch of Chandrayaan-2”, originally published 22 July 2019. 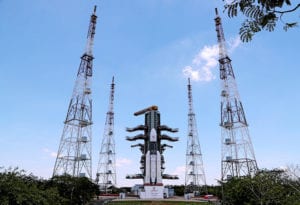 On the day of India’s Chandrayaan 2 mission, I published a short essay on the mission and what it means for India’s own space aspirations as well as the larger strategic dynamics in the region and beyond.

India is launching Chandrayaan-2 on July 22. This represents a major milestone for India’s space programme. India has previously sent orbiters around the moon (Chandrayaan-1) and around mars (Mangalyaan) but this will be the first time that the country will be touching down on any non-terrestrial surface.

Landing on any such surface brings with it difficulties of a magnitude larger than the missions that India has conducted so far. This mission requires India to not only send an orbiter around the moon but also carry a separate vehicle that will touch down on the moon’s surface while the orbiter stays circling above. Adding to further complexities is the fact that India will be landing on an unmapped section of the lunar surface.

Indeed, the exact spot where the probe will land will be decided just before the landing actually takes place, which makes this an extremely difficult mission. It says something about the complexity of the mission that even China, whose space programme is somewhat more advanced than India’s, did it first lunar landing three years back and their first mission was a lot less complicated because it was on the near side of the moon. China, however, did land a second mission on the far side of the moon earlier this year. Other than China, only Soviet Union/Russia and the United States have done it.

This will be a major achievement for India; this is also a necessary step in the evolution of India’s space programme. After the initial space race between the United States and the Soviet Union, the pursuit of such accomplishments was considered unnecessary because outside of the bragging rights, these kinds of missions were not seen to have much scientific or any other value.

Even the bragging rights lost some of its value once the US landed Neil Armstrong on the moon, the 50th of that happy coincidence is also this weekend. But these pursuits have become important for a few reasons.

One is that the practical value of these missions has grown. There is increasing interest in space mining, with many countries now seeing that as potentially viable, and putting a lot of investments into exploring this possibility.

A tiny city state like Luxembourg has made significant investment into this. Advances in space technology as well as the growing need to explore the space has pushed these new ventures. While space mining has not commenced yet, India cannot afford to be left behind if this turns out to be something actually viable.

The other reason is the renewed space race. Though the US-Soviet space race petered out well before the end of the Cold War, there is a new space race that is accompanying China’s rise. China is keen on matching American and Russian accomplishments in space but some of its activities in space have also caused security concerns.

That is, much like, its behaviour in its neighbourhood. Its behaviour in outer space is also forcing others into greater competition. For example, when China conducted an anti-satellite (ASAT) test in 2007, that was the first such test in more than two decades. Thus, other states feel that they need to match or keep pace with China’s space activities.

China’s undeniable accomplishments in space also add to its status. This represents another incentive for the Indian space programme because India as a rising power also needs to keep pace with China. Indeed, the competition between China and others in Asia, particularly India, has been growing for the last decade. China is, of course, well ahead but India has scored some achievements including being the first Asian power to carry out a successful mars mission.

China had earlier partnered with Russia to send a mars-orbiting satellite called Yinghuo-1 but the Russian mission, Fobos-Grunt, in 2011 became a failure. On the other hand, China has a much better, well-rounded space programme. So, India will have to play catch-up for a while. Chandrayaan-2, if it is successfully accomplished, would represent a significant step in this regard. But the race will continue.

Here’s some exclusive, behind-the-scenes footage of the mission’s various components coming together – https://t.co/baOMowvWHa

Neither India nor China are presently thinking of replicating the American achievement in sending humans to the moon but that would appear to be the logical next step and the race will go on.

The original can be find here – https://securitystrategyrajagopalan.blogspot.com/2019/07/how-india-is-catching-up-with-china.html  Rights reserved – this publication is reproduced with permission from Dr. Rajeswari Pillai Rajagopalan.

Bio: Dr. Rajeswari Pillai Rajagopalan is currently a Distinguished Fellow and I head the Nuclear & Space Policy Initiative at the Observer Research Foundation, New Delhi. She is also the Technical Advisor to a new UN Group of Governmental Experts (GGE) on Prevention of Arms Race in Outer Space (PAROS) (July 2018-July 2019). As the senior Asia defence writer for The Diplomat, she writes a weekly column on Asian strategic issues. She joined ORF after a five-year stint at the National Security Council Secretariat (2003-2007), where she was an Assistant Director. Prior to joining the NSCS, she was Research Officer at the Institute of Defence Studies and Analyses, New Delhi. She was also a Visiting Professor at the Graduate Institute of International Politics, National Chung Hsing University, Taiwan in 2012.