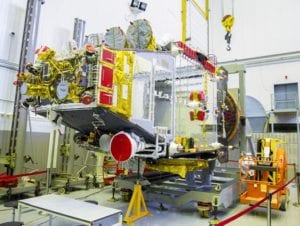 The Russian military communications constellation, Blagovest, will be completed in mid-July when the fourth satellite is launched,  according to a source that had spoken the TASS news agency.

“The Blagovest satellite will be launched on July 16 even though the launch was initially planned for the end of May. After the satellite is delivered to the orbit, the orbital group of military communications satellites Blagovest will be completed,” the source said.

The satellite will be launched from the Baikonur spaceport with the Proton-M carrier rocket.

Earlier reports said that the launch of the fourth Blagovest satellite was planned for the first quarter of 2019 but was later postponed to the first week of April.

The previous three Blagovest satellites were launched from the Baikonur spaceport in August 2017, April 2018 and December 2018 respectively

The Blagovest satellites will form a constellation of four geostationary satellites to support Russian military communications.

The satellites feature Ka and Q-Band transponders, and provide high-speed Internet,  telephony, and other services. Manufactured by ISS Reshetnev, the satellites are based on the bus featuring two deployable solar arrays with five panels on each. The design life is 15 years.