Rocket Lab has continued the success of its 2018 orbital launch program with the launch of seven payloads to orbit on 11 November 2018. The mission, named ‘It’s Business Time,’ marks Rocket Lab’s second successful orbital launch and deployment of customer satellites.

“The world is waking up to the new normal. With the Electron launch vehicle, rapid and reliable access to space is now a reality for small satellites,” says Beck.

“We’re thrilled to be leading the small satellite launch industry by reaching orbit a second time and deploying  more payloads. The team carried out a flawless flight with incredibly precise orbital insertion,” he says.

Rocket Lab is poised for high-frequency launches in 2019 thanks to production facilities that enable rapid mass Electron production, as well as a private launch complex licensed to launch up to 120 times per year.

“With two orbital launches down for 2018, we’re not resting on our laurels. We have a burgeoning customer manifest, so we’re moving onto the next mission within a few weeks – the incredibly exciting ELaNa 19 mission for NASA in December.” 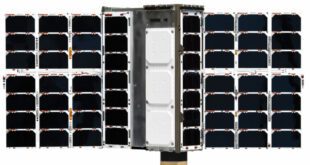