#SpaceWatchGL Op’ed: A Forgotten Disc. A Path to Peace. by Michelle Hanlon

Nestled inside a protective aluminum shell is a silicon disc about the size of a United States half dollar.  Inscribed on this disc are microscopic messages from leaders of 73 nations solicited by Thomas Paine, then head of NASA.  The messages, intended to be left on the Moon for posterity, are poignant, proud and congratulatory.  Some speak of their own national heritage, others salute the courage of the three humans who strapped themselves into a rocket and catapulted into the unknown.  From Afghanistan to Zambia, there is one common theme: peace.

The disc, on which is recorded this global yearning for peace, was stored in Astronaut Buzz Aldrin’s sleeve for its trip to the Moon.  And almost accidentally returned to Earth!

According NASA records and transcripts, Aldrin and Neil Armstrong nearly forgot to leave the disc and other mementos on the lunar surface.  In fact, it wasn’t until the Moonwalkers were climbing back into their spacecraft for the return journey to Earth when they realized their oversight.  At the last minute, the disc was tossed from the ladder and settled in the regolith without pomp or circumstance.

Forty-nine years later, why does it matter?

The Apollo 11 mission was a triumph of technology, innovation and the exploratory spirit of humankind.  It was also an opportunity for introspection.  Our species, which had progressed so far technologically, remained mired in wars – cold and hot.  Surely, a civilization that succeeds in escaping the bonds of Earth could also overcome the quarrels that impede peace and unity?

The bad news is that we are still asking ourselves this question today.  But that is the good news, too.  We haven’t given up on each other, and now we have enduring international institutions to help keep us on the path to a peaceful future.

The United Nations Committee on the Peaceful Uses of Outer Space (COPUOS) was formed in 1958, shortly after the launch of Sputnik.  The purpose of the Committee is to review “the area of international co-operation, and to study practical and feasible means for giving effect to programmes in the peaceful uses of outer space which could appropriately be undertaken under United Nations auspices . . . [and] to study the nature of legal problems which may arise from the exploration of outer space.”  The COPUOS is informed by two subcommittees: the Scientific and Technical Subcommittee and the Legal Subcommittee.  Secretariat services are provided by the United Nations Office for Outer Space Affairs (UNOOSA).

In its six decades, COPUOS has more than risen to challenge.  The five space treaties, known colloquially as the Outer Space Treaty, the Rescue Agreement, the Liability Convention, the Registration Convention and the Moon Agreement, were all considered and negotiated by the Legal Subcommittee.  And since the 1980s the COPUOS has developed more operational instruments, including guidelines, that form part of the legal regime of outer space.  This is as close the world community can come to regulatory power in space activities at the global level.  In short, as outgoing Chairman David Kendall stated, the COPUOS “is the only functional and functioning universal body considering the broad and challenging issues relating to the global governance of outer space activities, and the safety, security and especially the sustainability of outer space for current and future generations.”

The heartening news is that the COPUOS membership continues to grow.  Today the Committee boasts 87 State Members and 37 Permanent Observers.  At the COPUOS meeting in June, five more States, Cyprus, Ethiopia, Finland, Mauritius and Paraguay, submitted their desire to join the Committee and the European Union was accepted as a Permanent Observer.  The Committee also recommended that three NGOs – the International Organization for Standardization, CANEUS International and For All Moonkind – be granted Observer status.

Membership assures that nations may fully participate in the highest level of discussion regarding the peaceful utilization of outer space and the governance of space activities.  Moreover, it is the ideal venue to engage in cooperative activities in space.  And UNOOSA is poised to assist in the provision of technical and institutional assistance to all member States to the extent its budget permits.  Indeed, UNOOSA has demonstrated a determined commitment to, as Director Simonetta Di Pippo states, “build synergies between space science, technology, law and policy in fostering global governance and in particular for the benefit of developing countries.”  Among other things, the Office has planned workshops and forums around the world – all designed to increase cooperation and support the peaceful utilization of space.

Observer status permits NGOs the rare opportunity to witness, and at times contribute to, intergovernmental discussions in respect of all space topics and help promote sustainable development both in space and on Earth.  We at For All Moonkind are truly honored to be recommended for Observer status.  Access to COPUOS and UNOOSA is vital to our mission and goals – after all there is no other venue created specifically to nurture international cooperation in space. 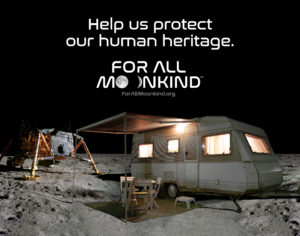 For All Moonkind is an international, non-governmental not-for-profit organization.  It is the only organization in the world committed to ensuring historic lunar landing and similar sites in outer space are recognized for their outstanding value to humanity.  We seek to have sites – like the Apollo 11 landing site at Tranquility Base — preserved and protected for posterity by the international community as part of our common human heritage.  In so doing, we want to remind people that human beings are an incredible, persistent and innovative species; that space is our future; that we have done many great things in space; and that we stand at the ready to do so much more.  As we work to enshrine the footsteps of yesteryear, we are paving the path for the footsteps of tomorrow.  And, hopefully, building a new platform for cooperation.

Humans are headed back to the Moon.  India plans a rover landing in October, China in December and a private company, SpaceIL, in February 2019.  It is not difficult to imagine a day when a human could return to Tranquility Base to see just where that disc with the Messages of Peace now rests.  The disc, including the story of how it came to rest on the Moon, is an indelible part of our common human history.  The site where the disc lays, and other sites on the Moon, like the Luna 2 and Luna 9 landing sites, bear witness to our first baby steps as a spacefaring species.  Access to them must be properly managed.

The UNESCO World Heritage Convention protects our human heritage here on Earth in part because it is well-understood that global recognition helps to build a sense of community among peoples throughout the world.  It is a good starting point from which to model a Convention on Universal Heritage in Space.

Today, human civilization on this Earth needs space and its resources to survive.  As we put our children on a path to a future in, or at the least inexorably tied to space, we need unity more than ever.  Identifying, recognizing and celebrating cultural heritage in outer space as our shared human heritage will build unity and universality.  Only by protecting our first steps in space and properly garnering the invaluable lessons of our forebears, will we be able to help our spacefaring descendants continue our migration into space with purpose, peace, cooperation and humanity.

For All Moonkind’s goal is as lofty as it is vital.  Forty-nine years ago, the mere possibility that a human might set foot on the Moon inspired a common dream of peace, etched in silicon, as forceful as it was wishful.  Two humans remembered to leave that silicon disc on the Moon.  Let’s remember their steps as our steps.  And remember too that many accomplishments, including peace, do not require pomp or circumstance – only commitment and candor.

We look forward to harnessing space, and our heritage in space, to promote peace.  And we look forward to working with COPUOS, UNOOSA, all the Member States and Observers and the wider international community to achieve it.

To learn more about For All Moonkind, please visit www.forallmoonkind.org. 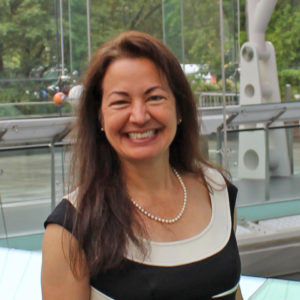 Michelle has more than twenty-five years of corporate transaction experience. She earned her LL.M. in Air and Space Law from McGill University where the focus of her research was on commercial space and the intersection of commerce and public law.