Edinburgh, 29 July 2022. – Florida-based company, Space Perspective, unveiled the design of its pressurized, balloon-borne capsule, Spaceship Neptune, which will become operational in about two years from now.

The carbon-neutral spaceship will comprise the SpaceBalloon, Reserve Descent System and the Neptune Capsule. The capsule will be spherical, accessible, sustainable, and safe. It was developed to remain secured to the SpaceBalloon for the whole duration of the flight. Its shape and windows allow for panoramic views. The capsule will have a ”splash cone” at its bottom for softer ocean landings.

Spaceship Neptune will be lifted to space slowly at 19 km/h by the company’s renewable hydrogen-propelled SpaceBalloon. Anyone medically fit to fly with a commercial airline will be able to fly aboard Spaceship Neptune. The six-hour flights will reach altitudes of about 30 km. The capsule will be able to carry eight passengers and a pilot for the price of US $125,000. Commercial flights are planned to start in late 2024.

Spaceship Neptune’s cabin will be equipped with a restroom and a “Space Lounge” with a telescope and interactive screens. Neptune will also feature four parachutes as a backup descent system. 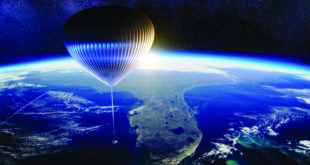