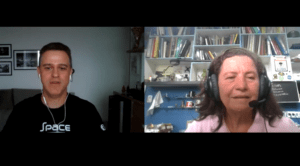 In this week’s Space Café Brazil by Ian Grosner, Prof. Dr. Maria Elizabeth Zucolotto, of the Federal University of Rio de Janeiro (UFRJ), talked about the importance of studying meteorites.

Her work is focused, above all, on raising the population’s awareness so that they know how to identify falling meteorites or warn scholars and scientists about them. She emphasized that because Brazil has a vast area covered by forests, many meteorites fall without anyone knowing.
Prof. Zucolotto pointed out that less than 1% of all contacts she receives are, in fact, meteorites, as it is expected that the population does not know how to differentiate them from regular rocks.

Prof. Zucolotto highlighted the projects with the public and amateur scientists, encouraging the dissemination of meteoritics in Brazil. She recommended the following sites:

Finally, Prof. Dr. Maria Elizabeth Zucolotto talked about the current bills in the Brazilian National Congress (PLs 4.471 e 4.529/2020) that intend to regulate the ownership of meteorites that fall in Brazilian territory. In her opinion, it is essential to regulate this matter to prevent the removal of meteorites from the national territory. However, the mere provision in the law is not enough, so that it does not happen as in Argentina, where there is a significant withdrawal of meteorites.
Prof. Dr. Maria Elizabeth Zucolotto also answered relevant questions from the audience. One of them was about the probability of a meteorite falling on someone, a house or even a plane in flight. The professor emphasized that the chances are minimal, with only one case registered to date in the state of Alabama, USA, in the 1950s.

This Space Café Brazil, held on 15 December 2021, was hosted by Ian Grosner, correspondent of SpaceWatch.Global in Brazil.

Share
Previous Space Café WebTalk with Pacôme Révillon : 2021- where we’ve been and where we’re going
Next Space Café Australia by Annie Handmer Recap: Troy McCann on Money and Space