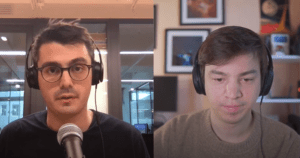 As part of the partnership between SpaceWatch.Global and Orbital Gateway Consulting we have been granted permission to publish selected articles and texts. We are pleased to present “Dongfang Hour China Aerospace News Roundup 17 May – 23 May 2021”.

Hello and welcome to another episode of the Dongfang Hour China Aero/Space News Roundup! A special shout-out to our friends at GoTaikonauts!, and at SpaceWatch.Global, both excellent sources of space industry news. In particular, we suggest checking out GoTaikonauts! long-form China reporting, as well as the Space Cafe series from SpaceWatch.Global. Without further ado, the news update from the week of 17 May – 23 May 2021.

As sort of a follow-up to the successful landing of China’s Zhurong lander/rover on the Martian soil last week, this week we saw Zhurong send back the very first images to Earth.

First of all, let’s view the two images that Zhurong sent back.

As a bonus, there were also two bonus low-frame rate videos showing the separation of the landing capsule (containing the rover and lander) from the Tianwen-1 orbiter.

Worth noting, even if Zhurong had landed successfully on the 16th of May, it took the CNSA 4 days to publish the first images (on the 19th of May). Why did it take so long?

The main reason is that it’s actually not quite easy to send data back to the Earth. First of all, a quick run-down of how the rover communicates:

When you consider that there were likely more critical data to send back to Earth in the early stages following the landing, you start to understand why it took a couple of days to get the images.

And fun fact of the day, NASA administrator Bill Nelson congratulated China for the successful landing of the Zhurong lander/rover, which does sound like rapprochement considering that NASA was rather silent (AFAIK) one month prior for the launch of the CSS Tianhe core module. In a statement, Nelson declared “As the international scientific community of robotic explorers on Mars grows, the United States and the world look forward to the discoveries Zhurong will make to advance humanity’s knowledge of the Red Planet”.

At the same time, however, at a Congress hearing, Nelson also brandished one of the pictures shot by Zhurong, and declared: ““I want you to see this photograph. I think that’s now adding a new element as to whether or not we want to get serious and get a lot of activity going in landing humans back on the surface of the moon.”

While it’s no scoop that competition between superpowers has historically boosted space exploration missions and budgets, I do think it was perceived rather negatively in China as a statement highlighting the US’s reluctance to see China succeed in space.

And Blaine, as we were preparing the episode, we got some additional shots yesterday from CNSA. Do you want to tell us a little bit about that?

Indeed, the Zhurong rover drove down the ramps that were extended by the lander just yesterday. A perilous step considering how thin and fragile-looking these ramps were, and definitely something that must have been done at a very slow pace. A commentary on the extent to which everything in space is freaking hard–including rolling down a couple of tracks to the Martian surface.

Zhurong successfully drove down, and is now directly in contact with martian soil, doing a number of test maneuvers before driving off to explore the Red Planet. It the process, I uploaded some additional shots that were fascinating as well:

That being said, the Zhurong/Tianwen Mars mission is far from the only major space project undertaken by China right now, and indeed, it might not even be the most major. As we saw a few weeks ago, and as discussed on the Dongfang Hour Episode 31, China recently launched the Tianhe-1 core module of the Chinese space station. In the weeks since, we have started to receive updates as the station is preparing for the arrival of the first cargo this coming week, and the first crew members soon after.

2) Completion of first batch of tests for the Tianhe Module

The other big activity of the week for China’s space program was in LEO, with the Chinese completing a number of important tests on the Chinese Space Station core module Tianhe, which was launched into space by a Long March 5B a couple weeks ago, on April the 29th.

And because the core module is meant to see a Tianzhou cargo supply mission and a crewed Shenzhou mission take place in the coming month or so, it has been undergoing intensive testing over the past few weeks. This included systems linked to the in-orbit rendez-vous and docking, the life support systems linked to the taikonauts living quarters, as well as the robotic arm which plays an essential role for the space station.

I just wanted to take a minute to show what this robotic arm, which bears some similarity with the Canadarm 2 on-board the ISS. It was designed by CASC’s 5th Academy (aka CAST), and is composed of two main shafts which form an “elbow”, 7 rotary joints, and a number of effectors and cameras at the end. It is 10 meters long, and can be extended to 15 meters. Some cool features include:

Some incredible stuff, very exciting times for China’s human spaceflight program. A few other points worth noting–the local paper here in Hong Kong, the South China Morning Post, reported on US concerns regarding the aforementioned robotic arm. The concerns were raised earlier this year by James Dickinson, Commander of US Space Command, in a Congressional hearing, and painted fears of the robotic arm being able to grab passing spacecraft.

The article also makes note to the Shijian-17 satellite, which apparently has similar robotic arm technology. Overall, it seems another small sticking point between the US and China in the space domain. Either way, looking forward to seeing the launch of the Tianzhou-2 cargo capsule this coming week from Wenchang, good luck to all involved!

Additional source of interest for the CSS/Tianzhou 2 here.

19 May was Buddha’s Birthday, a public holiday in Hong Kong and other places in the region such as South Korea. It is not, however, a holiday in Mainland China, as we found out with the State Administration for Science, Technology and Industry for National Defense (SASTIND) still hard at work publishing regulations, and as it turns out, regulations of a space variety.

Namely, we saw SASTIND publish the “Notice on Promoting the Orderly Development of Small Satellites and Strengthening National Safety” (关于促进微小卫星有序发展和加强安全管理的通知). Quite a bit to unpack here on this fast-moving topic:

Several things that also caught my eye while skimming through the SASTIND regulations:

On Tuesday 18 May, an article was published on Galaxy Space’s official WeChat account with the title “China SatNet is at the Right Time”. The author of the article was Xu Ming, the company CEO and one of China’s more noteworthy space industry entrepreneurs. First, a short background on Xu Ming:

Most of the founders of China’s leading commercial space companies come from the traditional space sector. This could include CASC, the Chinese Academy of Sciences, or in the most exotic of cases, some national military background. Not so for Galaxy Space. Xu Ming’s background was being an early employee at mobile app and security company Cheetah Mobile, a company currently trading on the New York Stock Exchange, and who’s valuation at one point exceeded $5B.

Cheetah Mobile itself has an interesting history–the company was founded by current Bilibili CEO and Co-Founder Chen Rui, and soon attracted significant backing from Kingsoft and Tencent. The former may sound familiar for discerning Dongfang Hour listeners–we discussed Kingsoft in Dongfang Hour Episode 24, from the week of 8-14 March 2021, when we spoke about none other than Lei Jun, one of the original executives of Kingsoft, and a prominent financial backer and supporter of Galaxy Space.

How and when Xu Ming and Lei Jun came to know one another is not clear, but around mid-2018, Xu Ming left Cheetah Mobile with the company facing uncertain circumstances soon after, and seemingly immediately thereafter, Galaxy Space appeared on the scene. The company has since pivoted from what was originally very clearly a satellite constellation business plan, to what is now a sort of satellite manufacturer/application development company, with an emphasis on areas such as 5G and IoT, which may have some synergies with Xiaomi’s mobile phone and other IoT device businesses.

The piece itself brings up some interesting points. First, Xu Ming points out that LEO constellations and the associated spectrum is by and large a first-come, first-serve market. That is, SpaceX, Amazon, OneWeb, Telesat, and a bunch of other western firms have applied for what is limited spectrum and begun to launch satellites into what is limited orbital space. If I can paraphrase Xu here, China should make sure to grab their piece of spectrum and their piece of orbit before it’s too late.

The second interesting point is the idea that China’s space sector has evolved very rapidly, but that this evolution has primarily been based on science & technology. By creating a specially-placed company and putting significant emphasis on building out a national broadband constellation in a relatively commercial way, Xu points out that this would be the first major industrial project undertaken by the Chinese space industry. By building out a space ecosystem that is itself so conducive to commercial usage (i.e. a satellite broadband network), China will inherently be opening up its space sector to some extent (again, paraphrasing here).

Overall, I agree with Xu Ming’s sentiment, and in general I do think that the incentive structure that seems to have been created in making SatNet a direct subsidiary of SASAC is actually pretty clever, and might even be close to optimal. You have a project that has significant national-level importance, a relatively blank slate in terms of influence from other SOEs, and in an industry that has seen rapid growth of commercial firms.

And just expanding a little bit on your last point of SatNet being relatively free of influence from SOEs, I saw further points this week suggestive of this: