SpaceWatch.Global asked its staff and contributors to review 2019 and provide an outlook into 2020. These personal reviews are being published during the holiday season. This is Dr. John B. Sheldon, Chairman of ThorGroup GmbH and Publisher of SpaceWatch.Global. 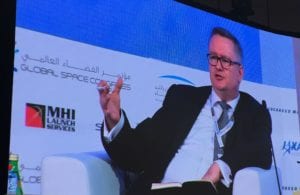 As usual with annual reviews the challenge is to find meaning in events that are still unfolding, but occasionally meaning thrusts itself to the fore just by its sheer weight, and the broad theme of space security in 2019 fits the bill perfectly, albeit not reassuringly so.

Along with the continuation of Chinese and Russian counterspace capability development, 2019 also saw India conduct its first ever direct-ascent anti-satellite (ASAT) test in April, heralding a new turn in the geopolitical rivalry between India and China. In June the French defence minister, Florence Parly, announced that France will rename its Air Force an Air and Space Force, and pledged to focus on both its passive and, potentially, active counterspace efforts, citing the growing space threats from China and Russia as justification. In the UK general election campaign the Conservative Party announced its intention to create a British space command, and now that they have been elected we might reasonably expect that such an entity will be created, especially after the long-promised Defence and Security Review has taken place in 2020. And, as of the time of writing, the U.S. Congress just passed its 2020 National Defense Authorization Act (NDAA) that will establish the fifth military service in the United States, the U.S. Space Force.

The immediate politics of the U.S. Space Force are, of course, dominated by the controversies that surround Donald Trump’s tenure as president, but – and regardless of the eminently debatable strategic rationale – the Space Force concept has been the subject of on again-off again debate in U.S. military space circles since at least the early 1980’s. While some worthy strategic debate about the merits and demerits of the Space Force has taken place, most public comment has either focused on the personal and political failings of its most (in)famous advocate, or has made it into a politico-cultural mantra and campaign gimmick. As the U.S. Space Force is actually established in 2020 I hope that a more thoughtful and strategic debate takes place that examines its rationale, roles and missions, and implications.

All politics is local, and space is not immune, but while space policies and strategy are often born out of local political contingencies and imperatives, their implications are truly global. 2019, therefore, can be viewed as the year when space truly became a locus of global strategic competition, for better or worse, and as global geopolitics continues to flux and flare we can expect that competition to intensify in 2020 and beyond.

In late 2018 I predicted that the issue of landing rights for the ground segment of satellite communication megaconstellations such as OneWeb, SpaceX’s Starlink, and Amazon’s Project Kuiper, among others, would become a growing problem. For much of 2019 it seemed that this prediction was either premature or even misplaced, but over the last month or two a picture is emerging that suggests my prognostication skills might have some mileage yet. As SpaceX mounts its aggressive Starlink launch campaign, and OneWeb prepares to do the same in January 2020, their collective corporate silence on what their respective ground segments and architectures looks like, and where they might be allowed to operate, is deafening. Much of the space and technology media are focused on the awesome sights and sounds of satellite launches and corporate hoopla (and, undoubtedly, eager to maintain access to Elon Musk and Jeff Bezos through uncritical reporting), but very few – until recently – are asking the hard questions about plausible and sustainable business models, landing rights in countries around the world, as well as ease of use and access to satellites by consumers – the pudding in which the proof will be revealed. To date, none of these details are clear and 2020 may yet see further developments that might cause concern for executives and investors. I mean, has anyone in these companies even read Eccentric Orbits?!!

I wish to make two predictions for 2020: the rise of political risk management in the satellite industry and the start of an Indo-Pacific space coalition.

As global geopolitics becomes rougher, perhaps even involving the start of a great technological and economic decoupling between China and the United States, and as many ambitious commercial space ventures stumble and falter (as they will), so executives in the industry will have to contend with greater and more complex political risk. By political risk I do not mean the old-fashioned job of lobbying politicians and clearing the regulatory path, but the more nuanced and challenging task of building and managing relationships with a range of stakeholders such as government ministries, nongovernment organisations and advocacy groups, as well as consumer demographics that increasingly expect that the products and services they consume and purchase align with their social and cultural values. Ironically, given the inherently geopolitical nature of all space activities (to include commercial space), the industry is downright tone deaf – even ignorant – about political risk. I predict that this will change and it’s going to be a steep learning curve for all concerned.

Second, and as China continues to build out its Belt and Road Initiative (BRI) space element of Beidou GNSS, satellite communications, and Earth observation capabilities, I predict that countries like Japan, India, Australia, and the United States will start to coordinate policies, initiatives, and even funding to provide a space alternative for countries in Eurasia, Africa, and South America. This counter-effort will be part of an ongoing geopolitical response to BRI and its perceived shortcomings, and many of the space capabilities needed are already in place with India’s NaVIC, Japan’s Quasi-Zenith Satellite System (QZSS), and the U.S. Global Positioning System (GPS) providing a reliable and proven combined GNSS capability, for example. Other capabilities, such as satellite communications and Earth observation, can be coordinated through commercial ventures (Starlink anybody?) or by better coordination and promotion of national satellite programmes. In Earth observation, for example, both India and Japan could coordinate civil Earth observation programmes and offer them to countries being courted through China’s BRI as a debt-free alternative with less onerous geopolitical obligations in return.

Lastly, as we enter a new decade, I wish to pose an awkward question to all of us in the global space sector:

What can we, the global space sector, do to reduce our contribution to climate change?

The global space sector collectively tends to be rather smug about this, after all remote sensing satellites and scientific spacecraft are instrumental in detecting, monitoring, and understanding climate change.

On the other hand, though, the global space sector is also overpopulating Earth orbits and stressing scarce resources, such as orbital slots and spectrum. Then there is the projected increase in launch cadences due to the growth in satellite demand, and all of the environmental, ecological, and public health risks that ensue. And on top of all this – and I am as guilty as anyone else in this regard – there is the constant air travel around the globe for meetings, workshops, conferences, and exhibitions that are the staple of our industry. From carbon offsets to more environmentally friendly and sustainable technological innovation, what should our industry be doing better (or even less of) to mitigate, and even help reverse, the malign impact of climate change?

I think that we can do better, but I don’t have all the answers, and so as 2020 dawns I look forward to all of us addressing this and other issues.

Dr. John B. Sheldon is the Chairman and President of ThorGroup GmbH, and is the Publisher of SpaceWatch.Global. The views expressed here are his alone.