Formed in 2010, the South African National Space Agency (SANSA) has been making huge strides forward. Though the Agency was only founded nine years ago, South Africa’s involvement in space goes back to the second half of the 20th century, with projects that included observing the Earth’s magnetic field at stations around Southern Africa. Dr. John Sheldon sat down with Dr. Val Munsami, CEO of SANSA to find out more about South Africa’s space heritage and its bright and ambitious future.

Could you update us on SANSA contributions to the South African Space Strategy? I know you’ve had some recent launches such as the Nanosatellites for maritime domain awareness and coastal surveillance? Can you tell us more about that, and what the next steps will be?

From a national priority perspective, the ocean economy is one of the biggest areas of focus at the moment. There was a 3U CubeSat launched in December last year to look at AIS (automated identification system) for marine traffic and that’s already proving successful. Then we had a secondary payload, which enables us to look at the potassium emissions from fires and to detect fires from space. Both of the satellites are operational and it has really been a pathfinder mission for us to test whether those technologies are working, and they are. We have secured funding for three more of these satellites to add to the constellation and two more, on top of that, for machine to machine communications in space so that the constellation will start talking to each other.

Our Earth observation satellite just went through a review process and we are coming up with a different strategy to complete South Africa’s next fully operational satellite. This we are hoping will be finished in the next 24 months. We are very focused on our strategy in terms of how the agency works for the local space sector in South Africa. We have defined our roles.  The agency will provide the core infrastructure and then we allow the industry to come in and build the applications. At the moment, we’re currently developing a data cube in South Africa, based on what Australia has done. We’re hoping to showcase this work later this year, in November. That’ll form the core infrastructure.

We have archived satellite imagery from the 1970s onwards. We want to use Earth Observation for evidence-based policy, but we also have to understand the historical perspective in terms of how things have changed, and will continue to change. Changes don’t necessarily happen overnight. It’s a gradual change over a period of years and even decades.

There was a study done using the data cube on water quality, over a specific water body in Australia. The government there decided to put policies in place and then they observed what happened over time to the water quality. Then, they looked at what happened when the policy was implemented and how that affected the water quality. Immediately, they saw a change in water quality based on the policy implemented. This is a classic example of how Earth Observation can inform policies and how it allows you to monitor and evaluate and give an empirical benchmark on whether it’s successful or not. So those are the kinds of things we want to look at in terms of applications and evidence-based policymaking.

Environmental monitoring and the climate change issue is very much at the forefront today and these are obviously part of SANSA’s strategy. What other applications are you looking at – national security etc?

All of these things are actually embedded in our National Space strategy. If you look at that document, there are three areas of focus. The first is the natural environment, and resource management. The second is safety and security. The third is innovation and economic growth. We need each of these three clusters as logical priorities for the country.

Effectively, the way the strategy was developed was that we brought all government departments into the room and asked of them what they would want from the space programme. Our key areas of focus respond to those government needs. We provide the spatial data resources to government and our secondary function is to provide industry support and development. We gather and process the data to a base level and then allow the industry to come in and develop the applications further.

So beyond Earth observation, when you look at the next five years for SANSA, what will be your signature initiatives and projects?

There’s already a signature initiative, just emerging right now.  Last year, the International Civil Aviation Organisation said that all aircraft must have space weather information as part of the flight plan. There are potentially big effects on aviation from space weather in terms of the effect on navigation signals and excessive radiation. We recently had a massive solar storm and the aviation sector lost its HF communications. From a safety perspective, if you are filing your flight plan, you must have space weather information included in the flight plan. We are one of two regional centres that have been identified to provide this information to the aviation sector. The other centre is a joint initiative between Russia and China. There are three global centres and the US is a standalone. And there’s one as a pan European consortium, about eight or so countries. And there’s another consortium between France, Canada, Japan, and Australia.

We’ve essentially got three years to get our house in order, and have full 24×7 operations. We are busy looking for investments to develop a new space weather centre. We have the only internationally accredited space weather centre in Africa, but we are looking at building a brand new centre purposed for the aviation sector that will enable us to provide space weather information for the entire African continent.

Is that done through the current ICAO regional union? 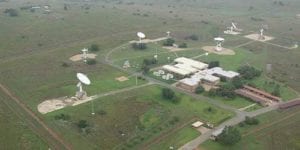 ICAO will handle the coordination but we are also working very closely with our air traffic navigation services (ATNS) in South Africa.

Are there any other initiatives or projects in the pipeline?

We also have a very big space operation facility in South Africa, with approximately 50 antennas on site that covers the frequency bands from UHF up to Ka – the most comprehensive coverage for a single ground station in the globe. We’ve supported over 500 launches from South Africa, because every time there’s a launch from the US or from French Guiana, we track the launch separation, and the conduct the in-orbit testing of satellites.

This is a very international, commercial business. With so many of the new mega constellations coming through, we are looking at providing ground segment support.

To complement our involvement in space science, we are also the only African country that has a presence in Antarctica. We send an engineering there and they stay over for 14 months at a time. The interesting thing is that 80% of the equipment there is for space physics. This gives us an understanding of the Earth’s magnetosphere, where all the magnetic field lines converge in the polar caps. Information about anything happening out in space gets conveyed along the magnetic field lines, which we track with ground based instrumentation.

How do you envision South Africa’s role in the African Union in terms of space? Do you see yourselves as the natural leader of these initiatives in Africa?

I Chaired the group that developed a policy strategy, which was approved in 2016. More recently, in January this year, Egypt was named as the host country for the African Space Agency. So just to make it clear, we didn’t put our name in the hat. The important thing was that the process was being run in a fair and transparent way. There were five countries that put their names forward.  So to come back to your question, if you look at the Space Policy, it says that we should not start duplicating infrastructure where it already exists. There is infrastructure in South Africa, Algeria, Nigeria and so on – there are already several individual agencies, so it’s more of a coordination role to bring the actors together. We certainly have a big role to play.

There are economic headwinds on a global scale at the moment. What is your outlook for the next few years? How do you prepare for those headwinds that may have a budgetary impact?

The agency was established in 2011. You’ll recall there was a financial crisis in 2010 when the prime mortgage market rate fell. I don’t think we’ve necessarily recovered from that in terms of the African perspective. So as an agency, we have to think about how we navigate with limited funding. We can do the basic stuff, for example, building an Earth Observation a data cube and getting the industry to develop applications using the platform. But if you go beyond that, it requires resources. So, from an agency perspective, we’ve been thinking about our business model. We are just going through a process of redefining what the business model for the agency should look like in terms of supporting the industry and so on.  We are also reviewing how we have performed over the last six or seven years as an agency and whether we are meeting our mandate or not. And so that will give us some insight as to how we can refocus the South African space landscape.

As an addendum to that, South Africa hosts the BRICS Summit, for example. Do you see cooperation in space among the BRICS countries?

We chaired the BRICS meeting on space cooperation last year, and I think things didn’t go quite the way we expected because of the underlying politics. It’s not specifically a space cooperation issue, but the general politics and the geopolitical context, which sometimes hinder you even though there might be good intentions.

For us, I think the international collaboration becomes a key lever for us, because we are looking at market opportunities by responding to international opportunities. There are quite a few opportunities that have now opened up in the commercial space such as lunar missions and the hosting of payloads on the ISS.

There is a very exciting ecosystem evolving in Africa in terms of New Space and companies making a name for themselves, even at the turnkey systems levels. What is the component level? Do you see South Africa is being part of the global supply chain? Are a lot of big players looking at Africa?

As I said, on a space operations perspective, we’ve had capabilities since the 1960s. As you know, there was a Deep Space Network in South Africa, but NASA pulled out in 1974. Now we have a fully sustainable business with lots of space operations. And as the international initiatives increase, that also brings an increase in terms of business opportunities for us. For example, we are now looking at a new Deep Space Network that we’re talking to the international partners about for the Lunar and Mars mission.

We have also developed our own high performance computers in South Africa. And we have built very fast data processors and some of those are being considered for space missions at the moment. We’ve got very good software engineers and structural engineers on the ground.

Then there is AI. We are looking at AI to see how we can use it in space applications. It’s those kind of synergies that we looking at to leverage and to gain economic value.