Edinburgh, 16 May 2022. – The United Kingdom and the United States signed a partnership to boost opportunities in the UK, the UK Government reported. The agreement lays the foundation for rockets, high-altitude balloons and spaceplanes to lift off from British spaceports.

The UK and the US work together on future commercial spaceflight missions in the Smithsonian Institution, according to the partnership. The aim is to ensure cheaper, quicker and more streamlined spaceflight operations by closely collaborating on commercial space launch licensing.

With seven spaceports being built in the UK, companies will have direct access to space while generating thousands of jobs. The agreement will help hosting US spaceflight operators in the UK more efficiently. In turn, it will also allow for UK space organisations to operate in the US. The process of operating from each other’s spaceports will introduce new customers and revenues to both countries.

According to the Government, space-related organisations in the UK produced £16.5 billion in income, while supporting around 47,000 jobs in 2020. The UK is currently preparing for its first-ever launch from home soil later this year from Spaceport Cornwall. 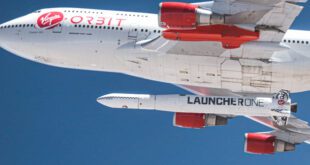