Space Café Russia Recap: A conversation on the safety of space traffic and prospects for its regulation 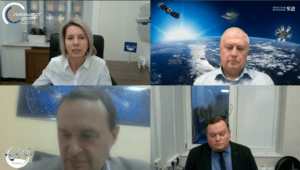 Space traffic safety is what makes space activities stable in the long run. Such safety has been an important area the UN Committee on the Peaceful Uses of Outer Space (COPUOS) is focusing on. Legal aspects of space traffic management have been annually reviewed already since 2016 as part of the agenda of the Legal Subcommittee of COPUOS. Discussions on this key multilateral platform, as well as at other international fora, have not yet brought all stakeholders to a common denominator. It is already evident that the focus of potential agreements is shifting from “management” to, at best, “coordination”.

Exchange of information as a minimum guarantee of our common safety in space also raises lots of questions. We share the same understanding that each space actor needs precise, accurate, and trust-worthy information to be conveyed in a timely manner. But so far we do not have a unanimous answer to the question of where this information comes from and how it is distributed.

In the absence of consensus at the international level, agreements on space traffic management come up at the national level, that is between national governments and operators under their jurisdiction. Such agreements undoubtedly contribute to ensuring space safety, but inevitably break the space traffic regime into fragments and do not solve the problem of interaction between participants in space activities at the global level. There are examples of this in practice.

During this episode, the guests discussed the most resonant case of last year – orbital maneuvering of the Chinese space station away from two Starlink satellites. What this case looks like in the eyes of those who were involved was described in the Notification by China under Article V of the Outer Space Treaty concerning preventive collision avoidance between the China Space Station and United States’ Starlink-1095 and Starlink-2305 satellites, while the other side commented in response (Notification by the United States of America concerning the notification by China). Our guests discussed the possibilities of bringing different positions closer together, which ultimately serves the interests of each of us as we all are users of diverse space applications here on Earth and beneficiaries of safe and secure space.

Let’s assume we have been given carte blanche and can establish a perfect space traffic regime. What will it be? Should crewed spacecraft and scientific space missions be prioritized over purely commercial projects? How should costs be shared among those that are maneuvering to avoid collision and should the maneuvering party be reimbursed for its costs? Should we kick up the barrier for entry into the “space club” by eliminating the possibility of launching unsophisticated spacecraft that cannot maneuver or have not proven to be technically sound? And yet, what about the space junk that is already in orbit, and how feasible are active debris removal projects from legal and geopolitical perspectives?

These and other questions were discussed with our guests.

This Space Cafè Russia, held on 4 February 2022, was hosted by Elina Morozova, Executive Director of the Intersputnik International Organization of Space Communications and a friend of SpaceWatch.Global.

To listen to the conversation with Vladimir Agapov, Alexander Solntsev and Valentin Uvarov on the safety of space traffic and prospects for its regulation, you can watch the full programme in the Russian

or in the English language here:

Space Cafe Russia is broadcast live on the first Friday of every other month. Join us at 5 pm MSK on 1 April 2022 for yet another hot discussion. We will talk on responsible behavior in outer space. 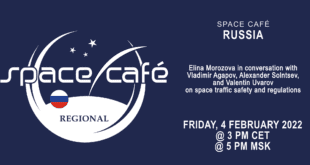 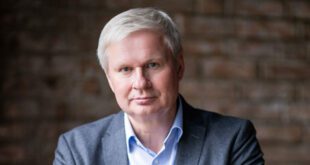 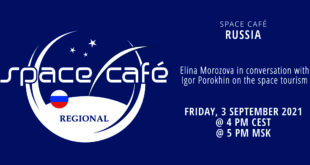