#SpaceWatchGL Opinion: Let there be light! 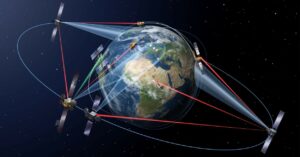 The advent of NGSO systems has brought many technology changes to the satellite industry. The two that stand out the most for me are intersatellite links (ISLs) and lasers. Sure, we’ve also seen technology developments in propulsion, miniaturization, station-keeping and of course antenna design, but these technologies aren’t so much a function of NGSO developments as they are part of a more general technology development in our industry. Or in other words: that would have happened anyway.

However, NGSO systems and LEO systems in particular, have piqued interest in the deployment of data-connections between the satellites that together form a constellation. The reasons for this are fairly obvious: they reduce, possibly eliminate the dependency on ground station to carry customer traffic over large distances and they allow all satellites to be monitored (TT&C) from a single location. The latter type connections don’t require much bandwidth – it’s in the Kbps range and can be easily setup using radio spectrum – but carrying customer data from satellite to satellite over long distances in space is different. That requires much more bandwidth, typically in the double digit Gbps range, with the ambition to go triple digits and beyond. While in theory radio spectrum could support that, operating in a vacuum and the absence of weather, makes lasers a very attractive alternative. Less mass, lower power consumption, less interference and most importantly: a lot more spectrum available to support the higher bandwidth requirements. Using light and lasers in space is almost a no brainer.

When lasers are also deployed for earth-to-space communication, things do get a little bit more challenging. The problem? Weather! The higher the frequency, the more difficult it is to penetrate clouds, rain and thunderstorms and I remember vividly the concerned looks we got around the turn of the century, when NewSkies was planning to launch an all-Ku GEO satellite over South East Asia at 95 East. Many thought the Ku frequency was too high in an area well known for its unforgiving weather and torrential rain. The much lower frequencies in C-band and even S-band were considered much better, and we were seen as taking a huge risk using Ku-band. When given the choice, NewSkies would have indeed put a C-band payload on that satellite, but spectrum filing did not allow for it, as the C-band spectrum rights for 95E were with our competitor. They had filing priority.

This brings us to some important dimensions we need to explore: Filing, Frequencies, Weather and Bandwidth. We have already established that by using higher frequencies such as light, more data can be transported; that is true for inter-satellite links in space, and it is true for earth-to-space communication. An additional advantage of using lasers from earth to space is however, that it is not ITU regulated. This is in sharp contrast to lower frequencies like Ka, Ku and C band which are highly regulated and considered to be a real barrier to entry as we saw in the NewSkies example. Put in another way: A high priority filing from the ITU for radio spectrum is considered a very valuable asset and in the glory days of Direct-to-Home video (DTH) this was effectively a license to print money.

While lasers may be unregulated, they can’t penetrate through clouds as we saw earlier. To overcome that issue, radio spectrum needs to be obtained and that is a cumbersome process defined by patience and money. With that, the use of lasers for earth-to-space connections effectively becomes a tradeoff between a favorable filing or favorable weather, which in turn comes with serious consequences for the services that can be offered. Terrestrial networks are designed to have a Core and an Edge. Customers are always connected in the edge and to get from one customer location to another, traffic is routed through the core, back to another edge location. Even if the two locations to connect are on opposite sides of the street, the traffic is still taken through the core, i.e. through some network hub, creating significant detours, unnecessary latency and complex routing. If we take this Core-Edge model into space and apply it to the most well-known constellations currently out there: O3B, OneWeb and Starlink – constellations that don’t have any lasers or ISLs in operation – it is easy to see these constellations fall in the category ‘Edge’: They provide the last mile connection for terrestrial infrastructure into rural areas or at sea. Any connection between two endpoints needs to be routed through a gateway and possibly through a nearby Internet node.

When ISLs are deployed and lasers are also used for earth-to-space communication, the constellation falls into the category “Core”. Data can be transported quickly over long distances from one side of the earth to the other. Using lasers for ISLs, the capacity can be in the 100s of Gbps as one would expect from a Core network. Connecting corporate or residential end-users will be difficult given the weather factor and the resulting inability of lasers to keep a connection up on a 24/7 basis. The resulting network topology will be such that the constellation is best suited as an overlay network to connect multiple datacenters. Is one datacenter unreachable due to weather? Traffic can be handed off to another datacenter or network node, from where data can be carried to its destination using terrestrial infrastructure. With that the constellation has become part of the Core network, with unique features in latency, security, and capacity.

Things become even more interesting when radio frequencies such as Ka or Ku band are used for earth-to-space communication, while keeping the lasers only for the ISLs. Now it will be possible to offer 24/7 communication services as weather is not a factor anymore. Any two points on earth can be connected using the shortest path – no detour through a Core – while offering the full capacity, as if said two points were part of the Core. While I’m not quite sure how to label this setup – it’s either an Edgeless Core or a Coreless Edge – it is the most versatile setup, combining Core and Edge capabilities in a very powerful way. It offers the best possible business opportunities, but it is also the one that is most difficult to bring into operation as it requires a very high priority spectrum filing for the earth-to-space frequencies, as well as separately negotiated landing rights for each country in which services are being offered.

Absent any ISLs or lasers, a satellite constellation basically turns into a swarm of gateway dependent bent-pipe satellites, oblivious to each other’s whereabouts. As we established earlier, such constellation effectively becomes an access network and a very expensive one at that. These access networks are doomed to be replaced by a terrestrial alternative, as soon as revenues reach a point where terrestrial business cases to roll out fiber or microwave, can close. In other words: the constellation acts as a gap-filler with an expiration date. This is not an attractive business model to say the least, as there is a constant battle with falling prices and ultimately a fight for survival.

Going “all laser” makes life a lot easier. Assuming the constellation lights up enough locations, using a sufficiently well meshed network topology, such earth-to-space laser constellation can offer alternative core network services, that have unique features relative to its co-existing terrestrial equivalents. This in turn can provide sustainable revenues and healthy profit margins. Using lasers rather than radio frequencies provides additional advantages, because the frequency filing and per country landing rights are a lot easier to manage both operationally and administratively.

However… If the operational and administrative hurdles have been taken and radio spectrum has been obtained and earth-to-space communication can be offered in Ku and/or Ka bands, we have an even more powerful service offering that can simply not be replicated using anything terrestrial. This in turn will provide some very unique benefits in capacity, security, resiliency, latency and scalability to name a few. Not only will that allow for healthy profits, it will also allow for unique and very sticky revenues through services that can only be offered with space based infrastructure.

Our industry is slowly but surely moving from geostationary orbits (GEO) to non-geostationary orbits (NGSO). As part of that change, we see lots of interest in the use of lasers for both inter satellite links (ISLs) and earth-to-space communication. How this technology is being used has a direct impact on the type of services that can be offered. This in turn correlates with the ability to generate lasting revenues and healthy profits. No lasers or ISLs? That’s a sure path to ultimately being wiped out by terrestrial alternatives. The deployment of lasers for ISLs and radio frequencies for earth-to-space communication provides the best options, but there are serious administrative and operational hurdles. While not as versatile, an ‘all laser’ constellation can offer an interesting alternative and potentially a viable growth path towards additional revenues for when spectrum filing has ultimately been obtained.

So… with the best intentions in mind for our industry, and in the spirit of the season: Let there be light!

Happy holidays and all the best for 2022.

#SpaceWatchGL Opinion: Satellites in a world of Crisis

#SpaceWatchGL Opinion: Is it time to short space?