#SpaceWatchGL Share: Russia’s attack on its own satellite is reckless and endangers us all

As part of the partnership between SpaceWatch.Global and Prof. Ram Jakhu, we have been granted permission to publish selected articles and texts. This is “Russia’s attack on its own satellite is reckless and endangers us all”, originally published 18 November 2021 at The Conversation.

Earlier this week, astronauts onboard the International Space Station rushed to seek shelter. The near-evacuation was not caused by an unpredictable space weather event or the millions of pieces of remains of existing space objects and rocket launchers left there since the beginning of the Space Age.

The lives of astronauts were temporarily threatened by a cloud of orbital debris — space junk — created by the testing of anti-satellite (ASAT) capabilities by Russia.

What is not temporary is the threat that space debris will pose to the thousands of other functioning satellites that form the backbone of modern economies and societies. 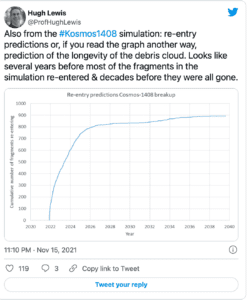 Russia blew up one of its own defunct satellites, and in the process, created over 1,500 pieces of trackable debris that will remain in orbit well into the 2040s. It is not clear how many pieces of untraceable debris have been created.

For decades, major space-faring nations have tested a variety of weapons with the capabilitiy to destroy space objects and launch attacks on Earth from space. The latest kinetic weapon test has created not just debris in space, but also sent shock waves around the world.

Stray and uncontrolled debris travels multiple times faster than a bullet, and can easily disable or even destroy the satellites that we depend on for basic but critical activities. Satellites facilitate banking transactions, land and ocean management, search and rescue operations and weather monitoring, among other things.

Calling the action “reckless and irresponsible,” the United States issued a statement announcing that debris created by the latest weapons test in space will threaten “space objects that are vital to all nations’ security, economic and scientific interests for decades to come.”

The NATO secretary general also expressed that this “reckless act” will pose a threat to civilian activities and “important space capabilities for basic infrastructure on Earth like communications, like navigation, or like early warning of missile launches.” 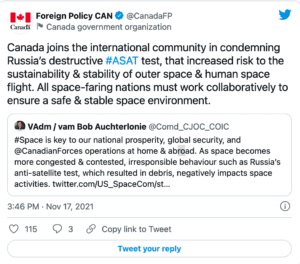 Condemnations of this single event were echoed in France, the United Kingdom and South Korea.

Various space industry associations and businesses have expressed concerns about Russia’s latest act. These concerns are not only limited to the increased risk to multi-million dollar space assets, but also the cost that may be incurred in manoeuvring satellites to avoid possible collisions with the new debris created by the Russian ASAT.

A more upsetting possibility is that other countries may be encouraged to follow suit and conduct similar weapons tests in space, thereby exacerbating rising geopolitical tensions and accelerate an arms race in space.

Space is not a vacuum

Space activities are subject to extensive laws and regulations. In 1958, it was universally agreed that all nations have a “common interest” in outer space, and that space should be used for “peaceful purposes.”

The 1967 Outer Space Treaty, one of the most widely accepted international instruments, obliges governments to conduct space activities “for the benefit and in the interests of all countries,” and with due regard to space activities of other nations. Though not expressly prohibited, destructive acts in space can have global impacts and are contrary to established principles of international law.

Despite the latest weapons test, there are ongoing initiatives to safeguard the safety, security and sustainability of outer space. For over three decades, the United Nations has annually called on nations to prevent an arms race in outer space.

Together with China, Russia itself has been an active supporter of a binding treaty to outlaw the use of force against space objects. If this treaty had been adopted, it would have prohibited the very kind of act that was just undertaken.

Civil society initiatives to clarify the law as it applies to military activities in outer space are ongoing.

A letter — initiated by the Vancouver-based Outer Space Institute and signed by academics, policymakers and legal experts — addressed to the president of the UN General Assembly urged the adoption of a treaty that would ban the testing of anti-satellite weapons.

Space is widely recognized as being the “ultimate high ground,” meaning that it holds significant strategic and military value. The U.S., China and India, major space-faring nations, have also tested a variety of ASAT weapons and capabilities to destroy their respective objects in space.

Russia’s ASAT test is worrying as it may normalize unilateral actions in space that jeopardize the common interests of all countries. More worrying is the fact that this may not be the last action of its kind given the disparity that often exists between the condemnations and actions undertaken by governments.

However, space is also a shared global commons, which must be used in a responsible, safe and sustainable manner by all. Earlier this year, G7 leaders recognized that “the orbit of our planet is a fragile and valuable environment that is becoming increasingly crowded” and that “all nations must act together” to safeguard it.

It is imperative the international community unites to dissuade tensions in outer space, and urgently halt all reckless and irresponsible acts that will impact present and future generations.

The original can be found here –https://theconversation.com/russias-attack-on-its-own-satellite-is-reckless-and-endangers-us-all-172105   Rights reserved – this publication is reproduced with permissions from Bayar Goswami,  Ram Jakhu and  Kuan-Wei Chen.