#SpaceWatchGL Share: Ballistics, Space CSI and how to identify your spacecraft?

Since the early years of the last decade, the new space industry boomed, utilizing the rideshare (or hitchhiking – no towel needed) opportunities to reach orbit on almost all major launch vehicles.

Dnepr, Soyuz, Vega, Long March, Electron, Falcon-9, LauncherOne, and many more all offer opportunities for small satellites. In fact, the industry is so thriving that two niche industries followed. The launch brokerage services, led by companies such as ISILaunch and Spaceflight, and orbital insertion services led by D-Orbit and Momentus.

But, as the PPP (Peter Parker Principle) says: “With great power, there must also come great responsibility,” and small satellites must come up with a way to solve a serious safety problem, which is, and pardon my french, “Where the F%$^ is my satellite”?

Finding a needle in the Haystack

Since 2014, I’ve been involved in several small satellites launched in rideshare launches. It always took the operations team a few weeks to identify which satellites, out of the multiple satellites launched to similar orbits, are actually ours. This is important because satellite operators use TLE (Two Lines Elements), published by Celestrak and Norad for every satellite in orbit, to feed an orbit predictor that controls azimuth and elevation motors pointing the ground antennas toward the passing train of satellites.

The problem? Several dozen objects (yet to be identified) have very similar orbital parameters and fly so close that it is elementary to get them mixed up due to injection schemes.

To through more fuel on the fire, most small satellites use the same VHF and UHF TMTC systems, with amateur frequencies licenses, which makes differentiation almost impossible.

Current solution? Just wait. patiently until your satellites (sorry, the objects that you guesstimate are your satellites) will separate from the rest of the bunch.

Well, not necessarily. We can use technology and come up with simple yet effective solutions such as:

And in the meantime?

Although TLEs are not accurate enough to differentiate between spacecraft, we satellite operators could do more to narrow down the search and try to find which is which, and ti is an analysis of the BC (Ballistic Coefficient).

BC, which is the 9th parameter in the first line of the TLE, reflects important distinctive attributes of a spacecraft, such as mass and cross-sectional area, and hence could be used as a means to evaluate the difference between satellites. But, one should not jump to conclusions too fast, because the M/A could be very close for a 1 kg, 1U satellite, a 20 kg, 6U satellite, and a 600 grams 1P Pocketqube. Why? because the cross-section area can dramatically change if you have deployable panels and even antennas.

The drag coefficient reflects two parameters that need to be considered also when comparing TLEs, and they are orbital altitude and solar activity. The lower the orbit, the higher Cd will be, due to atmospheric density. With solar activity, it affects the atmospheric density, when solar storms hit the earth, the massive particles ricochet air molecules way up and changing the density at altitudes of up to altitudes of 500 or even 600 km.

And, there is another variable that needs to be taken into account, which is the attitude control operational mode. There is a difference in the average cross-section between tumbling, sun-pointing, and nadir pointing satellites, and since TLEs for a specific satellite, is actually a result of a small number of measurements in an arbitrary part of the orbit, it could also change the end result as reflected in the TLE.

So… Too many variables, It doesn’t really help…

True, but, all you need is a known satellite to calibrate, and the mass and cross-section of your own satellite, taking into consideration the effective cross-section before and after deployment and the attitude control in which the satellite fly.

And this is the highlight of this article. As an act of good faith and a measure of helping other satellite operators, I would like to suggest a calibration satellite, that you could use in order to have a better guestimation regarding which of the unknown, unidentified TLEs could be YOUR satellite. There it is:

Now all you have to do, is search for the latest ballistic coefficient of Diamond Blue on the Satcat, extract the Cd from the calibration data, and use it for your satellites.

Although regulations do not enforce unique distinctive identification means for satellites, it seems we are reaching a point in which it will become satellite operators’ interest to identify their space assets within ours from launch, and not days or weeks, especially due to the increasing collision probabilities in low earth orbits.

With a calibration factor and known attributes of a given satellite, one can narrow down the search when analyzing new TLEs.

If, by any means, these calibration factors helped you, please share them with others.

This article was originally published on LinkedIn. You can read the original here. Republishing with authorisation of the author. 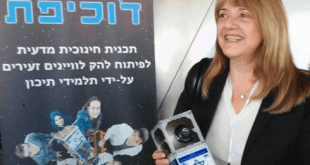 Space Café Israel by Meidad Pariente: Dr. Ana Heller – Never give up on your dreams