A rocket is going up into space with a drag sail. The goal? For the drag sail to bring the rocket back to Earth,

preventing it from becoming like the thousands of pieces of space junk in Earth’s lower orbit. The drag sail, developed by Purdue University engineers, will be on board a Firefly Aerospace rocket expected to launch in November from Vandenberg Air Force Base in California.

This sail and six other “Dedicated Research and Education Accelerator Mission” (DREAM) payloads are flying on Firefly Aerospace’s Alpha launch, the first flight for the launch vehicle company.

“High-value orbits around Earth are getting congested,” said David Spencer, a Purdue adjunct associate professor of aeronautics and astronautics and the mission manager for the Mars Sample Return Campaign at NASA’s Jet Propulsion Laboratory. If we don’t get satellites or other launch vehicle components out of orbit, then eventually highly utilized orbits are going to become unusable for other space systems,” he said. “Drag sail technology is designed to launch with a host spacecraft or launch vehicle and deploy at the end of the host vehicle’s mission. The drag provided by the Earth’s atmosphere will accelerate the vehicle’s deorbit.”

This is thanks to 3-meter long carbon fiber booms (hence the “3” in the name) that pull out a sail with an area of 194 square feet. An animation showing Spinnaker3 attached to a launch vehicle in space is available on YouTube. The sail itself is made of a shimmering translucent material, a fluorinated polyimide called CP-1, produced by the company NeXolve. The material is designed to resist degradation from monatomic oxygen in low Earth orbit.

Purdue spacecraft laboratory engineer Anthony Cofer led the design and testing of the drag sail assembly. “This drag sail has booms like a sailboat does, but sailing through space is very different. The drag sail booms need to be extremely lightweight, and they need to be stowed into a tight volume,” Cofer said. “Once deployed, the sail needs to maintain its integrity throughout the deorbit phase, which could be months or years.”

Launch vehicles and other spacecraft typically deorbit on their own using propellant, but these propellant needs limit the payload mass that a launch vehicle can bring up to space. Drag sails use atmosphere drag to get the job done, saving valuable propellant and reducing the overall vehicle mass.

U.S. space vehicles are required to deorbit within 25 years after end-of-mission. If a satellite or launch vehicle becomes inoperable, it can’t use propellant to deorbit. A drag sail passively helps spacecraft to deorbit even if it is inoperable or out of propellant. The Firefly Aerospace Alpha launch will be a test of how well the Spinnaker3 prototype helps the launch vehicle stage to deorbit.

“Lots of things could deorbit on their own in about a hundred years, but that doesn’t do us any good. We want to hasten that deorbiting with a drag sail,” said Arly Black, a Purdue Ph.D. candidate in aeronautics and astronautics, who conducted system testing and performance analysis for Spinnaker3.

“Taking into consideration predicted atmospheric conditions for November, the Firefly Aerospace launch vehicle could deorbit on its own at a low altitude of about 200 miles within 25 days. Using Spinnaker3, the deorbiting process could shorten to 15 days.”

Deorbiting without a sail in 25 days is already a reasonable amount of time for low altitudes, Black said, but as launch altitude increases, so does deorbit time, increasing the probability of collision with other objects. Speeding up that deorbit time with a drag sail would make a huge difference.

Spinnaker3 is a prototype for a product line of drag sails that is being developed by Vestigo Aerospace LLC, a startup company founded by Spencer. The idea is to develop drag sails of varying sizes and boom lengths tailored to the type of spacecraft. The technology is licensed from the Purdue Research Foundation. Spencer has worked with the Purdue Foundry on business model development for the startup.

The product line also includes a Spinnaker1 sail, which has 1-meter-long booms designed for deorbiting smaller satellites such as CubeSats that are used for space research. Spencer directed the yearlong development of Spinnaker3 by students, faculty and staff at Purdue’s Space Flight Projects Laboratory. The drag sail development also included contributions from 18 undergraduate and graduate students as part of a course on space flight projects.

Lab testing of Spinnaker3 at Purdue completed in the spring. A team at California Polytechnic State University, San Luis Obispo contributed an avionics unit that provides power and communications for the payload, as well as imaging capability that will allow photos of the sail to be transmitted to Earth after deployment.

Vestigo Aerospace partnered with Purdue for a NASA Phase I SBIR award and has recently been awarded a two-year Phase II investigation to advance drag sail technology. The Purdue principal investigator for the SBIR is Alina Alexeenko, a professor in the School of Aeronautics and Astronautics. 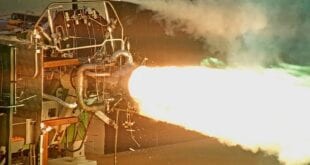 Firefly valued at $1 billion in new $75 million financing round