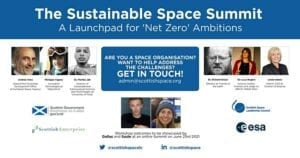 In a groundbreaking initiative organised by the Scottish Space Leadership Council (SSLC), global space sector stakeholders have been joining forces to explore solutions to sustainability-focused challenges set by environmental groups, academia, businesses and the wider public.

An initial period of outreach led to an influx of written submissions that were reviewed by an independent judging panel. Challenges were then set for space industry representatives to address during online workshops running throughout May. Three broad themes were identified, with one calling for a holistic, internationally adaptable approach to measuring the true impact of the space sector on the environment. The second called for an exploration into developing an open library of space data to connect citizen science initiatives with environmental data. Finally, the sector was asked to identify ways to quantify, classify and assess the growing problem of low-orbiting space debris, to help protect the near-Earth space ecosystem.

The judges represented a range of backgrounds, including organisations such as Friends of the Earth Scotland, NatureScot, Scottish Enterprise and the European Space Agency. The panel also included a professor from the University of Texas at Austin and a former judge from BBC television’s Robot Wars.

Friends of the Earth Scotland Director, Richard Dixon, stated: “The space industry is a huge help in understanding our planet and monitoring the changes that are happening in global forests, lakes and oceans, but it has a range of environmental impacts of its own. It is great that the sector wants to do more to tackle these impacts head-on and I’ve been glad to put time into to the very fruitful discussions that have taken place so far.”

Findings from the initiative are to be showcased at the free online Sustainable Space Summit on the 23rd of June. The event will also highlight the many benefits that accessing space-sourced data bring to society, including the use of satellites for monitoring climate change, deforestation, illegal mining or fishing, and even tracking endangered species or tracing food supply chains – all of which are quickly becoming something of a UK speciality. Confirmed speakers include the Director-General of the European Space Agency and the Scottish Government.

The work, which began at the end of 2020, has been endorsed by the Scottish Government and its agencies from the outset. Business and Enterprise Minister Ivan McKee said, “It is great to see the space industry take a leading role in working towards a more sustainable future for the sector. Sustainability and environmental considerations are of paramount importance as Scotland is fully committed to delivering its space ambitions in line with our target to transition to a net-zero society by 2045. The Scottish Government believes that the space sector can play a pivotal role as a force for good in the global fight against climate change.”

Daniel Smith, the Interim Co-Chair of the SSLC and Founder of space marketing firm AstroAgency, explained: “This exciting initiative has demonstrated the collaborative nature of the UK’s fast-growing space sector, an industry that delivers a wide range of benefits to society. The Summit aims to unveil new ideas, highlight the importance of space access and establish productive and long-lasting engagement between environmental groups and the fast-growing UK space industry.”

The Summit is expected to shine a light on lesser-known details about the growing UK space sector, such as the work already being performed by rocket manufacturers and spaceport developers to reduce their carbon footprint as part of the satellite launch supply chain.  It also aims to increase awareness of the multitude of ways that businesses and the wider public already rely on space-enabled services for their daily needs.

Registration for the online Sustainable Space Summit is free and can be accessed via www.scottishspace.org. 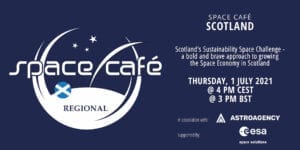 SpaceWatch.Global will conduct a special Space Café Scotland by Angela Mathis on 1st July at 3 pm BST  to discuss the outcome of the Sustainable Space Summit – https://spacewatch.global/2021/06/register-today-for-our-space-cafe-scotland-by-angela-mathis-on-1-july-2021/