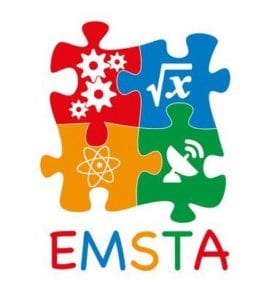 EMSTA is a not-for-profit, Community Interest Company promoting an understanding amongst the public, and especially young people, of how Engineering, Maths, Science, and Technology are involved in important issues. Its annual seminar in partnership, with The University of Hertfordshire, addresses topical issues from across a range of industries which all use a practical application of STEM subjects.

This year’s session focused on the management of Space Debris and how we can better look after the near-earth space environment, to ensure a sustainable future for the space industry.  Professor Quintin McKellar, from the University of Hertfordshire and Roger Boddy Chair of EMSTA began the session by emphasising the importance of STEM, both on an individual level and for the future of all environments upon which humanity depends. Martin Coleman, advisory board member for the Satcoms Innovation Group compared the debris problem in space, to the plastic problem in our oceans. Explaining that unlike here on earth, space debris is a challenge which is out of sight and out of mind for many.

To tackle this challenge the seminar brought together a panel of experts on space debris and its management, highlighting new technologies and exploring how to monitor, avoid and remove debris.

Dr Moriba Jah, Associate Professor of Aerospace Engineering and Engineering Mechanics at the University of Austin, focused on setting the scene. Dr Jah is an expert in the motion of objects in space and has studied the relationship between debris and space traffic extensively. He highlighted that the volume of objects in orbit, means there is an urgent need for space traffic rules to be agreed upon collectively by stakeholders across the industry. His work at the University of Austin centres on problems related to space safety, security and sustainability.

Dr Jah highlighted collision avoidance as a key concern and the importance of creating a framework of guidelines to keep the space services and capabilities which we all depend upon operating effectively. From a sustainability perspective he discussed initiatives to create ties with environmental protection agencies and campaigns. Explaining that currently environmentalist groups predominantly concentrate on oceans, atmospheres and climates and often don’t consider the space ecosystem.

Near-earth space is a finite resource and can only support a limited amount of space traffic using its highways. Dr Jah explained that the key is to avoid debris compounding the issue by cluttering up those highways. The volume of debris is increasing exponentially, and its birth rate is extremely high compared to its death rate. Therefore, it is vital to define the carrying capacity of these highways so that we can use the information to determine policy and regulations. As there is no ownership of capacity Dr Jah emphasised the important of collective industry responsibility. Explaining that just as the ITU allocates frequency spectra to satellites, there should be an international organisation which does the same for orbital capacity. Leasing capacity to operators under the condition that it is then returned for future use.

Jonas Radtke, CEO and Co-Founder of OKAPI:Orbits went on to discuss the collective responsibility of Space Situational Awareness (SSA) in more detail. Radtke is interested in how the space environment is evolving over time and how we can measure capacity for future deployments. He stressed that to avoid space becoming too crowded we need legislative support to manage the environment effectively and to define the room available. He explained that it is not always the total volume of objects we need to emphasis, but their location and how they interact.

Radtke and his colleagues are working to make sustainable space flight easier and space operations safer, through online risk monitoring and collision avoidance services. During his presentation he talked through how SSA works and ways to contribute to a more responsible use of space. Sharing some significant figures around the scale of the problem; that some 900,000+ space debris objects larger than 1cm3 endanger satellite operations and that these objects move with velocities of around 7.6km/s in distances between ca. 300 and 40,000km above Earth.

Radtke explained that analysis requires knowledge of the object’s characteristics, position, velocity and behaviour. Sharing details of which types of space objects are currently catalogued and how depending on their altitude the location is tracked. He explained that one of the big challenges is that once processed, observation data quickly becomes outdated and is based on a level of uncertainty. He went on to explain how AI algorithms within the OKAPI platform help, by processing information more efficiently to deliver positioning data and collision warnings. Ultimately facilitating the long-term goal of transitioning Space Situational Awareness into Space Traffic Management.

Harriet Brettle, from Astroscale talked about addressing the Challenge of Space Debris. She focused on the role of satellites in everyday life, and the urgency of acting now to ensure future space sustainability. Brettle shared the full range of services space technologies provide, from broadcasting to navigation, and numerous other functions. Enabling students to gain an understanding of our global reliance on these systems and how they help us to predict, monitor and function across different industries.

Brettle shared visuals on the active satellites around Earth, with and without debris. Offering a stark contrast between the useful active satellites and the cluttered debris filled graphic. Reinforcing the idea that some of our most important services are managed by satellites which are being crowded by space junk. Brettle clarified that over 95% of objects in orbit are actually debris. She also explained how quickly the problem has escalated comparing visuals from 1957 and 2018. Emphasising that as we launch more satellites into orbit we end up with more and more debris, risking the active satellites which we rely on.

Brettle discussed the importance of learning from the environmental lessons on Earth and incentivising satellite operators to clean up after themselves once their satellites are no longer providing value. Astroscale’s mission is to secure orbital sustainability for the benefit of future generations, by developing technology and informing policy to enable change. Brettle’s talk certainly will have inspired those future generations watching. As she showed the debris removal devices currently in development, addressing both end-of-life services to mitigate future debris and active removal to reduce current debris. Brettle also shared exciting details of upcoming debris removal missions. Including the world’s first end-to-end debris removal demonstration, which will show how the servicer can successfully find, rendezvous and capture the client satellite under a number of increasingly challenging scenarios.

The final panellist Valentin Eder, from Space Analyses, discussed the broad range of space data the company provides. Covering the birth rate and death rate of objects in space and showing their activity through a number of fascinating graphs to visualise the debris issue. Eder went into detail on the current active satellite owners and the usage of space divided by application. His data covered communications satellites, earth observation, technology and development, navigation, space observation, earth science and educational use. Painting a picture of how space is shared.

Eder went on to discuss how debris is created explaining that today only a small portion of space debris results from conjunction. Surprisingly more than three quarters of the current creation of space debris originates from the space craft itself. Eder offered his view that ‘cleaning’ space is not a realistic way to impact risk reduction and outlined potential challenges and disruptions caused by this type of intervention. Adding an interesting new perspective to the conversation.

The issue of space debris is of course huge and while any individual seminar could not resolve these challenges, the panellists emphasised that it is vital to give space debris the same focus as other environmental issues. EMSTA making this type of content accessible to students, will certainly prioritise the issue in their minds and hopefully inspire the next generation of engineers to help tackle it.